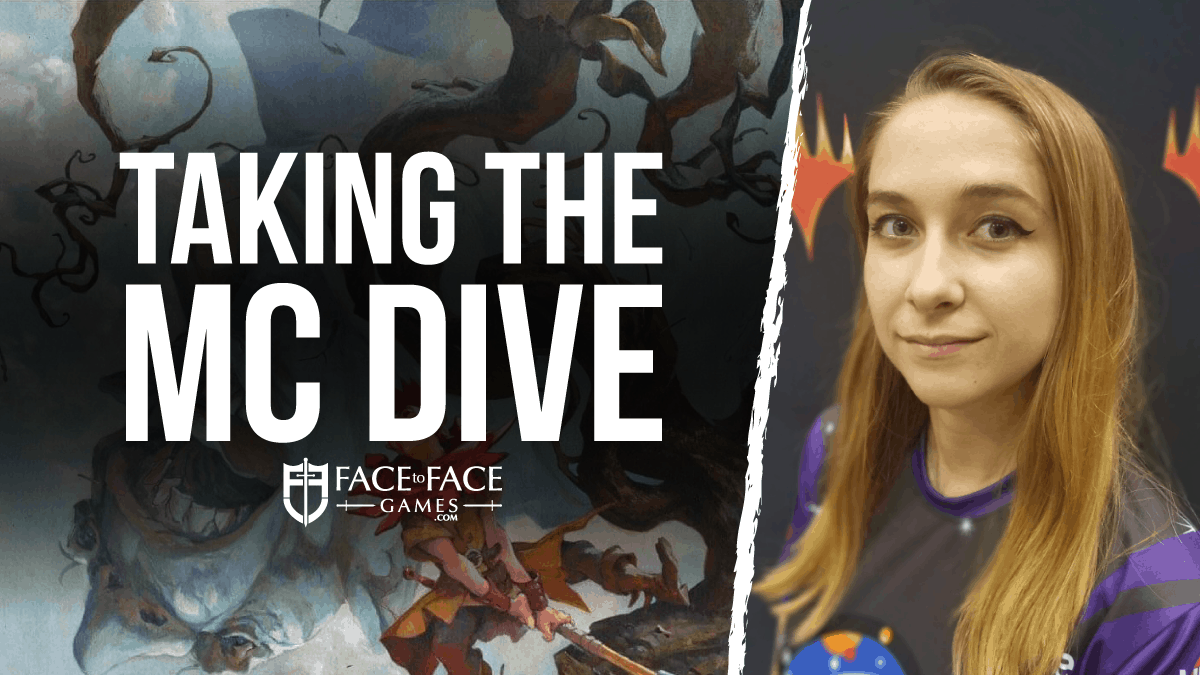 The shock of qualifying for a Mythic Championship lasted for a few weeks. I was riding that high for a long time. Until it kind of hit me — I need to learn an entirely new format that I have never played competitively: Limited.

Not even Sealed, where I could just hope to open some bombs. Drafting — one of the most skill intensive formats in all of Magic. MCVI is Eldraine Limited and Standard. I’ve definitely felt comfortable in Standard because it’s played on the SCG Tour and is one of my favourite formats. However, when it comes to drafting, I was wildly unprepared.

The last time I had drafted in paper was Eternal Masters draft at my LGS with some friends. So, needless to say, I was  a little nervous for the Limited portion of the Mythic Championship.

Where do I start? How do I know what’s good? How can I figure out what colours everyone is in? Do you leave the land in the pack? (lol) My biggest fear was walking into the tournament hall and 0-3ing the draft portion before Standard even started. I suppose that could still happen, however I have been able to find ways to improve over the past few weeks.

I started my introduction to drafting with some Arena drafts. And yeah, I know, the bots are bad.

Starting my testing off on Arena helped me develop some initial drafting skills that you can only get from experience. Specifically, being able to see what is open and drafting a deck accordingly. Sure, [Card]Merfolk Secretkeeper[/Card] was always open, and every deck had four or more copies of the card if I wanted them. That said, it was still beneficial to me to be able to identify that a specific archetype was strong/open in a given draft. Arena drafting also gave me an idea of different draftable archetypes in the format. I’ve seen food decks, mono-coloured decks and lots of other synergies in various forms.

What Arena drafts offer is a like a visual exercise. It might not be the highest level of play or drafting, but it lets you see everything play out in front of you. And for someone trying to hone my skills, this had a lot of value.

I needed to work on playing around that niche pump spell in Limited. It’s much different than a constructed where you always know what to expect. A lot of gameplay in draft happens because of your instincts, all the things you learned from draft after draft. This diversity of gameplay was a little easier to learn on arena, so I’m happy with that part of my testing.

After figuring out a few basics on my own, I turned to some friends, teammates and Limited masters to help inform me about the more nuanced aspects of drafting and the format in general.

I learned the proper functions of each card type within the context of the format: removal, threats and bombs. I also learned there is a point where removal costs too much mana and is not worth playing. Finally, I  learned how to identify which colours and archetypes are open and how to draft the best deck possible with what is available.

Collaborating with others is huge in Magic and tournament preparation, especially something as high-level as a Mythic Championship. Moving my preparation towards watching others’ draft, hearing their ideas and rationales and seeing different analyses of cards was extremely helpful in my learning process. I don’t like to gather information from only one source, but rather a compilation of information from numerous sources.

I started talking to more people, watching more drafting streams, reading more Limited theory articles, and drafting on Arena and MTGO a LOT. There are a ton of high-powered Limited cards in this set, especially taking into account that a lot of adventure cards are essentially two spells in one. This is my first competitive drafting event, and it’s hard to set clear expectations for myself, so I came up with a few small goals instead:

Obviously I would love to 3-0 my first pod, but while I am a lot more comfortable in my drafting abilities now, I am still new to the format.

At least I have Standard solved. Or so I thought.

Field of the Dead is banned.

I spoke too soon. Having to switch gears and practice an entirely new Standard format in about two weeks is pretty stressful. My plan prior to the banning was to play whichever Golos/[Card]Field of the Dead[/Card] deck was the most powerful in testing. But the banning of Field left me pretty lost in a format I had been comfortable in for a while.

Re-evaluating the Standard format, I think it’s fairly obvious that [Card]Oko, Thief of Crowns[/Card] is one of the most powerful things you can be doing (in almost every format!). The pinnacle of Standard is likely to diverge into play Oko or beat Oko. I’ve been trying Bant, Sultai and Simic versions of Food decks, focusing around Oko, and I am usually someone to “play the best deck” in any given constructed format.

However, I really don’t like the gameplay around Oko mirrors, so I might be tempted to find the best deck to beat Oko decks. I recently made Top 4 of a Standard Classic with Sultai Food, and overall the gameplay was rather dry. I believe I did well because I mulliganed more aggressively than my opponents. Having matches that revolves around being the first person to cast Oko or [Card]Nissa, who Shakes the world[/Card] are not where I want to be in a format.

I have seen numerous ways attempting to beat Oko decks, starting with maindeck [Card]Noxious Grasp[/Card]s. Other than modifying other Oko Decks to include these [Card]Noxious Grasp[/Card]s, I have also seen Rakdos Aristocrats fair well against Oko decks, as well as some Mono-Black Aggro decks. These decks are often aggressive enough to deal with Oko.

Other options aside, let’s be honest — this event is all about food. Now, that might be a little boring for coverage, but for the purposes of preparation it is quite a challenge to figure out which small tweak is going to make the difference in these countless mirrors. In testing it’s clear to me that there are merits to Bant, Sultai and Simic, which makes it a challenge to choose your top food deck.

That in mind, there are pros and cons to each choice. Bant offers some control of the board in [Card]Teferi, Time Raveler[/Card] and [Card]Deputy of Detention[/Card] while Sultai adds a lot of raw power and straight Simic is lean and tempo focused.

Testing Constructed formats has been easier for me than Limited, almost exclusively due to experience. I still have a lot of testing to get done in the new Standard format, but I wanted to set some goals related to the Standard portion of the MC also:

Even though it is my first MC,  ideally I’d like to make day two and ultimately re-queue for the next professional event. I want to maintain a realistic perspective, but also push myself to do the best that I can. Being on the “Pro Tour” was never a dream I thought I could reach, and now that I’m here I don’t want to throw it away.

The MC is just hours away and I am a ball of excitement and anxiety. No matter what I am going to try my best and take in everything. This is a peak in my Magic career and hopefully one of the best weekends of my life. See you there.