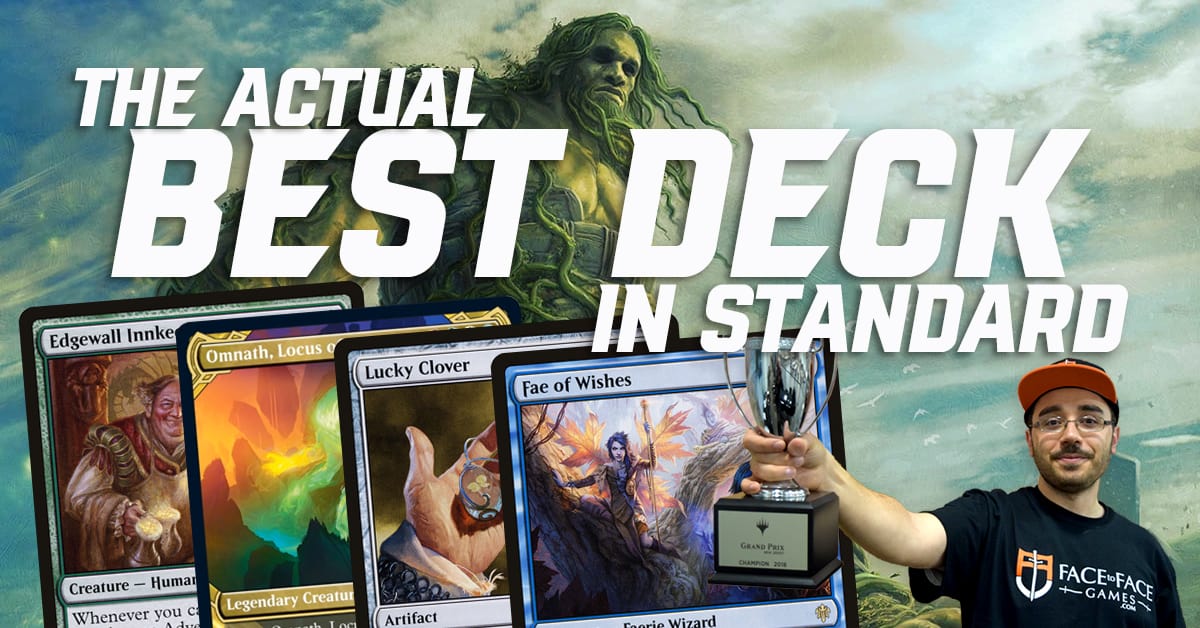 I’m sure it’s no big surprise, but it’s Omnath Adventures. The deck is putting up the wildest numbers and has a huge skill component. The format is warping around it enough that people are entertaining main deck ways to kill artifacts.

The saddest part is the deck is so powerful with Omnath that it functions well even without a Lucky Clover. Using either Innkeeper to draw lots of cards while landing haymakers or ramping with Omnath and slamming very large Beanstalk Giants. My favorite part of this deck is how I tend to win by using Fling. A lot of nostalgia comes to mind when reprints go that far back.

There’s a lot of changes from list to list, I’ve been running it a particular way that I prefer for several reasons. The early stages of the game are where the most crucial turns lie with Adventures. Granted allows for favorable late stage positions. Also, to combat decks like Rogues that are difficult matchups I’ve added main deck cards like Thundering Rebuke and Mystical Dispute. Both of which are solid against many of the top decks at the moment.

I’m thankful for the digital age of copy and paste because registering a 15-card sideboard with every card being a singleton was a nightmare. There are hilarious games where you will grab every available option out of your sideboard. No, not out of necessity of course. The flexibility of your targets and the cheap casting cost all make Granted a more potent weapon.

One of the surprising strengths of a deck like Omnath Adventures, is that with open decklists people have to play around cards you’re not even playing in the main deck. This allows you to gain leverage without using up space. Post board configurations get trickier though as we don’t have a lot of room to make sideboard adjustments. Meanwhile our opponents are almost certainly preparing for the matchup.

Strangely enough the Standard format may just be in disarray enough that prepare as much as they like, we may still be favored in all matchups. At least until someone comes up with a new tactic that works in Standard. With the Grand Prix Finals around the corner some of the best minds in the world are set to tackle just that.

If things don’t change and we see 50%+ numbers of participants playing this deck it’s important to get the mechanics down so you can win the mirrors. Also, so that we play optimally of course in our other matchups. First thing is mana sequencing. It’s important to be able to cast Omnath, Locus of Creation. As early as possible is preferred. To that end we do not want to play out a second copy of Forest or Island in the first four land drops. It’s ideal to be able to add one of each of the four colors by turn four.

Next is card utility. Whenever possible we want to conserve Fabled Passage for a turn following Omnath. This is of course to gain the benefit of the ramp part of Omanth. Beanstalk Giant is another way to make this happen and important to hold back if your plays line up correctly. If you have a Lucky Clover on turn two and a Beanstalk Giant on turn three, then fire away. There’s almost never a good enough reason not to get a turn three double ramp spell.

Sometimes I’ll ramp on turn three with Beanstalk Giant just so I can cast a turn four Escape to the Wilds. This lets us gain a double ramp for subsequent turns in addition to giving us a maximum look at cards with which to craft a game plan against whatever we are facing.

Granted is perhaps the most complex spell in the deck. Knowing what to grab and how best to utilize it will be the difference between winning and losing. Generally speaking, it’s a better strategy to be proactive instead of reactive, but there will always be circumstances where you are forced to be on the back foot. Cards like Stern Dismissal can protect you from an Ember Cleave and force your opponent to take alternative lines which is important to making it to the later stages of the game.

Playing Innkeeper on turn one or not is a crazily complex decision that’s hard to map. With open decklists it gets a lot easier but I generally assess if I can afford to blow it or if it makes more sense to conserve it (which I usually do end up conserving). Sometimes it’s nice to force the opponent to play their spells out of order needing to answer it, so keep that in mind.

Only playing two copies of Brazen Borrower and Lovestruck Beast feels kind of strange, but I am convinced it’s right. Brazen Borrower is more situationally good and most solid when facing a Rogues opponent. Lovestruck Beast dominates on defense against ground aggro decks. These decks are in short supply because of Omnath’s prodigious life-gain ability. Still it’s important to have a few copies to capitalize on Lucky Clover and Edgewall Innkeeper.

Some interesting things to note are I do not play Ugin. Every other list plays Ugin. I have played what I feel is a sufficient number of matches in which Ugin was never Granted for. So, I decided to make additional space and not run the powerhouse card. Sometimes I found trying to force Ugin was incorrect and cost me a game. I’m definitely not saying this is 100% correct and the implied value of open decklists makes you want the card there more, not less. I am going to continue running without however for the short term.

With a Clover out and a Granted spell resolved, my favorite combination of cards to grab is Fling and Primal Might. This forces our opponent to either leave up reaction mana or to have to arrange blocks such that they don’t just die out of nowhere. Frequently you’ll tutor these up and then ignore them for a few turns while the opponent is hyper focused on them. Then you’ll go another route and take full advantage before coming around back to them and pushing through a victory.

Having a land in the sideboard to grab with Granted can come in very handy. Not getting the fourth Fabled Passage in the main deck can be a little rough, but I’ve tried replacing it with alternatives and found them all wanting. Evolving Wilds set you back a mana the turn you go to grab it and sometimes that can be the difference between winning and losing.

The sideboard guide part of this deck is the funniest part. You’re pretty much not going to sideboard! Mystical Dispute and Thundering Rebuke are the main deck flex cards. Which is only four cards of course. In the sideboard if something is doubly redundant. Such as Wilt and Shredded Sails against a deck that you’re only interested in killing an artifact. Then you can bring in one copy. A Thundering Rebuke could come in if you know that Redcap Melee is an even better Granted target. Most of the time you just won’t be making any sideboard changes however.

There are cards like Embereth Shieldbreaker that would be good to have for mirrors, but cutting Granted targets is so hard and costly. Sometimes you just won’t draw the Shieldbreaker because you cannot fit in enough copies and sometimes they won’t have a Lucky Clover anyway to take advantage of the ability. I’ve found it’s best to just focus on being proactive yet again. Last note I’ll make is many people are running a singleton or even two copies of Giant Killer in their list. It’s a nice effect with Edgewall Innkeeper, but I’ve found it poor against the Rogues lists and sometimes a little too mana inefficient to be very effective. I wouldn’t begrudge anyone trying to fit them in, but I didn’t feel it belonged in an ideal list.

Thanks for tuning in as always, jump on the wagon quick before the banhammer talks resume. This deck will get you to Mythic and fast.