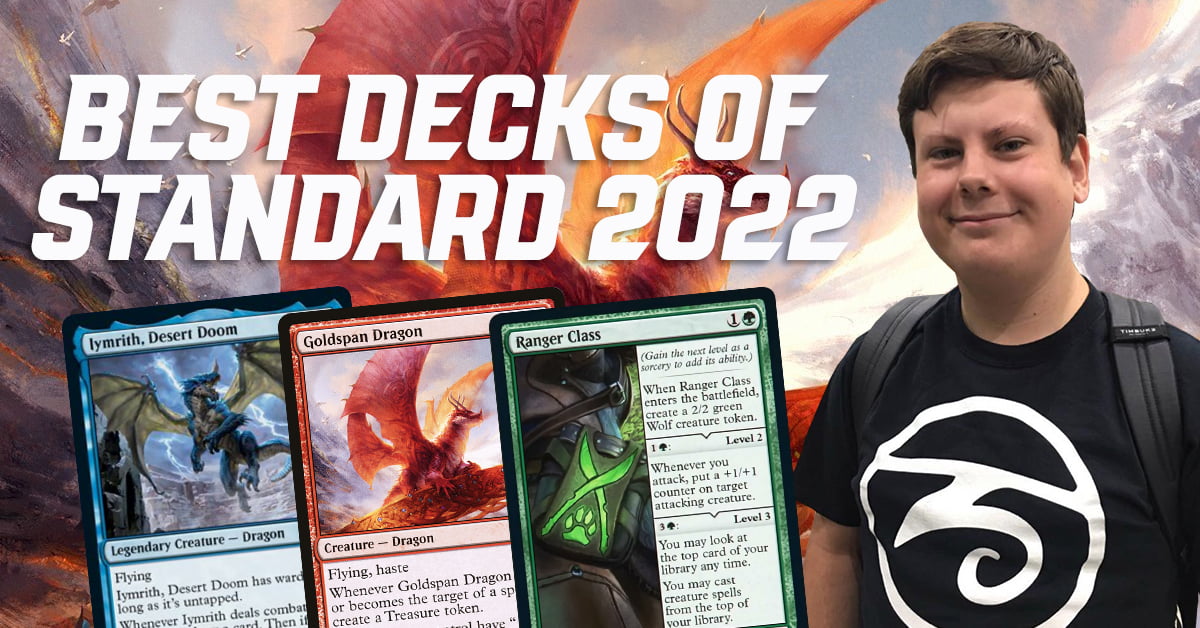 It’s always refreshing to have a brand new Magic format where anything is possible and innovation is the key to success. While the current Standard format has in large part stayed the same with the release of Adventures in the Forgotten Realms, MTG Arena’s Standard 2022 format is proving to be a home for innovation and fresh ideas. Standard 2022, if you’re not familiar, is a MTG Arena best of one format that only allows the use of cards from the sets Zendikar Rising, Kaldheim, Strixhaven, and D&D Adventures in the Forgotten Realms. D&D provides a swath of new and interesting cards to the pool, such as Ranger Class, Mordenkainen, Iymrith, as well as others. While the format is available as a ranked and casual best of one format on Arena, various tournament organizers via MtG Melee have been running independent events (with sideboarding!).

Standard has always been a format very near and dear to me. I loved the idea of innovating and finding rogue decks in a format dominated by a few archetypes. I remember going to Grand Prix and SCG Opens where I would be sorting through a box of Standard staples the night before the event, hoping to see if I could find some forgotten card that could prove to be useful. I had success in a few events with rogue decklists, such as top 8’ing a SCG Classic Hour of Devastation release weekend with Approach of the Second Sun. The power level of the format had been consistent for years, and I found some success with a few rogue archetypes:

In recent times we’ve had to deal with the stress of multiple bannings of parasitic and overpowered cards, but with Throne of Eldraine and friends leaving the format for good, Standard might actually be in a pretty healthy and diverse place once again. Now onto the decks.

The clear winner of Standard 2022 on the surface is Izzet Dragons. Goldspan Dragon is by far the best Mythic to come out of the four legal sets, and the Izzet already being one of the best decks in the former format makes it a force to be reckoned with. The core of the deck, Goldspan Dragon, Expressive Iteration, Frost Bite, Alrund’s Epiphany, Faceless Haven, Galazeth Prismari, Saw it Coming, and Behold the Multiverse, all stay legal while losing only very few pieces.

While Izzet Dragons may be a format mainstay, new cards from Adventures in the Forgotten Realms have ventured their way into various aggro strategies in the format. Let’s take a look at Mono Green Aggro by popular streamer Crokeyz with the new additions of Ranger Class, Werewolf Pack Leader, and Lair of the Hydra.

One aspect I like about the aggro decks of the 2022 format is that most have access to eight man-lands to fight the midrange and control decks of the format. With so few sets, the format lacks decent instant speed removal spells. Power Word Kill, black’s only two-mana instant removal spell, doesn’t even hit Faceless Haven to begin with. While you can’t trigger Werewolf Pack Leader on turn 3, Pack Leader provides a great way to pull ahead in the mid-game and trample over in the aggro mirrors. The addition of Ranger Class provides some added-value for the deck as well, giving it both strong early, mid, and late game cards. Mono Green has both resilience to control strategies and ways to out-grind creature mirrors, making it a prime contender in the current format. While it may not have the best ways to deal with an early Goldspan Dragon, however, the deck has a lot of potential.

Another clear winner of the 2022 format is Mono White Aggro.

This list comes to us from Tom Maxwell, who top 8’d the “Hooglandia” Standard 2022 open a weekend ago. While Izzet Dragons spends its first few turns setting up with Expressive Iterations, Mono White has the capability of completing going under some of the midrange decks of the format. A turn 1 Monk of the Open Hand into turn 2 Monk, Codespell Cleric puts 7 power on the board! On turn 2! That’s honestly pretty impressive. Similar to Mono Green, this deck has lots of ways of generating value in the mid to late game, such as the one copy of Legion Angel and Paladin Class. Paladin Class especially can help you close out games in the air with a double-striking flyer, if things on the ground get gummed up. While this deck doesn’t have eight man lands, I do like all the ways it can fight against the control decks, with six man lands and Reidane to fight a potential wrath. Like Mono Green, I’m a huge fan of these decks having the ability to put a tremendous amount of pressure on their opponent, while having ways to catch up in the mid to late game. I’ve also seen other builds floating around as well with Showdown of the Skalds, but the mana and man lands get a little worse in those builds.

While I was hoping to focus a good portion of this article on decks involving The Book of Exalted Deeds, but just as I was ready to hit publish, I was alerted to the fact that the card had just been banned. You read that right, banned! The combination of Book and Faceless Haven led to some uninteresting games, where six mana could lock your opponent out of the game. With very few land destruction spells in the format, WotC made the quick decision to ban it.

Do I agree with this banning? Not particularly. I think it’s a rash decision to ban a card in a format (that I crafted wildcards for!) without tournament data. While there are a few spells to deal with the combo (Cleansing Wildfire, Waking the Trolls) overall it is two hard of a combo to interact with for some decks. With no chess clock for best of one gameplay, it can lead to very, very, VERY, long games if the losing player chooses not to concede. As someone who played an hour long game due to my opponent refusing to concede, I can safely say that this was a miserable experience for both of us.

Instead, let’s focus on some other control decks in the format that could be great choices post ban.

Dimir Control is a deck that saw some success in the previous Standard format. The deck has all the major pieces a controls deck is looking for, even with only four sets available in the format. For spot removal the deck has access to Power Word Kill and Soul Shatter, Shadow’s Verdict and Blood on the Snow for wraths, Saw it Coming for counter, Behold the Multiverse for card draw, and cards like Iymrith, Mordenkainen, and Professor Onyx for finishers. The glaring hole in this deck is that it has few ways to profitably deal with the threats presented by Izzet Dragons. Power Word Kill can’t target any cards from Izzet, and the next best targeted removal spell is Baleful Mastery at four mana. Dimir needs cheap removal since you want to be able to kill Goldpsan Dragon with counter magic backup, if your opponent has a Saw it Coming Foretold already. Otherwise, Dimir has access to a swath of great cards that make it a viable strategy.

On the other side of the coin we have Azorius Control. Azorius has the benefit of having a Foretell wrath and access to Skyclave Apparition. Azorius, however, faces a similar problem of not having great interaction against Faceless Haven and Goldspan Dragon. I am a fan, however, of Devastating Mastery against decks that might have a variety of tricky permanents, but overall I think Azorius needs access to instant speed removal to make a contender and a better choice than Dimir.

While Standard 2022 isn’t a permanent format on Arena, it does give us an interesting look at the decks that may be good with the release of Innistrad: The Midnight Hunt. Izzet Dragons looks to be by far the winner of Standard 2022. As a contender in the previous format, competing against cards from Throne of Eldraine and beyond and also losing very little with rotation, Izzet Dragons seems to be the clear deck to beat. However, various aggro decks such as Mono White and Mono Green look promising, and I’m keeping my fingers crossed Dimir or Azorius, or perhaps Esper Control will be a major contender with Innistrad’s release come the fall.

What decks have you been winning with in Standard 2022? Let me know!