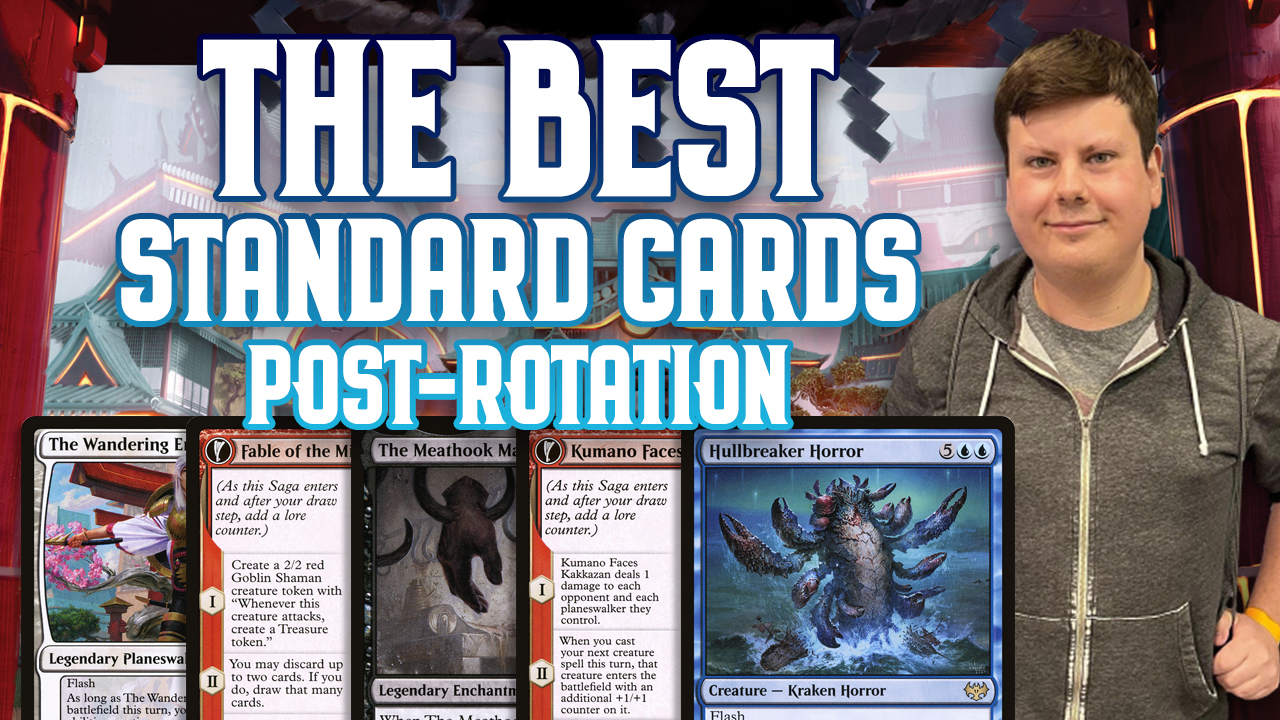 While RCQs are in full swing for Dreamhack Atlanta’s Pioneer Regional Championship, it was announced earlier this month that the following RC will be Standard. Standard is a format that’s seen very little paper play the past few years, due to well – a global pandemic. The other main reason the format has lost its popularity is due to the fact that Standard is so easily accessible on MTG Arena and Magic Online.

The format has suffered various bans over the years as well, but perhaps with the yearly rotation happening this fall and the revival of competitive paper Standard events, the format is due for a resurgence.

While there aren’t many Standard events happening right now, looking at some Magic Online data we can start to see which clusters of cards will be good reference points for rotation in the fall. The best deck in the format, Jeskai Hinata, loses three of its key cards: Magma Opus, Goldspan Dragon, and Expressive Iteration. While this deck might not retain its standing after rotation, many of the other top decks in the format will.

One of the big non-Jeskai decks of the current Standard format is Esper midrange. While this deck loses out on some cards that rotate, such as Luminarch Aspirant and Vanishing Verse, the majority of the deck will stay in Standard come rotation. Esper gets access to a slew of powerful removal spells, wraths, and planeswalkers – assuming it can cast all of them. Losing out on the Pathway lands from Zendikar Rising and Kaldheim is pretty big. That being said, this deck thrives on casting just powerful threats. Your goal is to put a threat such as Kaito or The Wandering Emperor in play and disrupt your opponent with cards like Obscura Interceptor, removal spells like Void Rend, and counterspells like Disdainful Stroke and Make Disappear.

Overall I think Esper Midrange or Control will be pretty viable post-rotation. Even without the Pathways Esper has 16 dual lands at its disposal (Raffine’s Tower and the 12 Innistrad “slow” lands), so with only five sets in Standard that might be a reasonable amount. With very few cards actually rotating from a deck that’s put up results in the current meta I’m happy to look at Esper builds with rotation in the fall.

Being one of the top decks of the current Standard metagame, Boros Aggro is the premier aggro deck going into rotation. While Mono-White is also a powerful aggro strategy, Boros gives you access to a slew of haste creatures that synergize well with each other. Kumano Faces Kakkazan helps you power out a big Adversary or Reckless Stormseeker, and by the time Thundering Raiju is hitting the battlefield your opponent will be taking a bolt to the face just off an attack trigger! This is one of those decks that just feels unbeatable when you curve out on the play. While the pieces exist for both Mono-White and Boros, Boros feels like it’s doing more broken things.

With Fable, Graveyard Trespasser, and Bloodtithe Harvester being the base of the Pioneer variant of Rakdos, you know that these cards should not be overlooked during the upcoming rotation. The Pioneer version also usually plays copies of Tenacious Underdog and Invoke Despair – Invoke being more easily castable off the back of Fable’s 2/2 Goblin Shaman token.

It’s also worth noting that a lot of the pieces for Rakdos Sacrifice remain in Standard. While I’m not sure what the more powerful version of the deck will be that exists in the fall, one thing to note is just how many good cards are in these two colors. The sacrifice variant gets Oni-Cult Anvil, Unlucky Witness, Experimental Synthesizer, and a cheap removal spell in the form of Voltage Surge while the midrange version just taps out for solid creatures and spells at every turn of the game. A lot of these Rakdos cards are great places to start with deckbuilding, which leads me to my next deck to watch out for…

While Grixis Vampires saw play at the Streets of New Capenna Championship, it didn’t see a ton of play in the Magic Online events that followed. However it’s worth noting that Corpse Appraiser, Evelyn, and Fable of the Mirror-Breaker are cards that synergize extremely well together. With the right mana-base, removal suite, and ways to out-grind an opponent this deck is definitely one to keep an eye out for. It’ll be interesting to note if any other notable vampires come out of Dominaria United, but Corpse Appraiser and Bloodtithe Harvester make for solid support for Evelyn.

I think there’s also something to be said about Azorius-based control. I’m a control mage at heart, and the pieces are definitely there for a control deck. Usually control decks want the following: removal, draw spells, counterspells, wraths, and finishers. Azorius has this already in removal like March of Otherworldly Light and Fateful Absence, draw spells in Memory Deluge, counterspells in Dissipate, and finishers in the form of Hullbreaker Horror. The Wandering Emperor is the glue that bridges this deck from its early to late game, keeping your opponent distracted until you can turn the corner. I’m not sure if this deck can deal with some of the aggro starts from the creature decks, especially in the face of Thalia, Gaurdian of Thraben. We’ll have to see what control cards make their way into Dominaria United.

I would be amiss if I didn’t talk about what mana bases will look like come Dominaria United’s release. Assuming Dom United doesn’t give us any new rare dual lands, Standard will have 15 different rare multi-colored lands: the five Capenna “triomes” and the ten Innistrad “slow” lands.

In addition to dual lands the Neon Dynasty channel lands will also see play in most, if not all mana bases for each deck of the format. These lands are so versatile and come at almost no cost. With the pathways leaving Standard it’s hard to come up with a reason why any deck wouldn’t play some copies of these.

Two cards that are also worth noting are Ledger Shredder and Reckoner Bankbuster. I’m positive Bankbuster will be one of the most-played cards in the format. A Mazemind Tome that attacks is too good to pass up for many decks in the format, and I will not surprised to see this as 2-4 copies in most maindecks.

Ledger Shredder is another solid two-mana rare, but it’s power level is relative to the type of deck it’s included in. Currently Shredder is seeing practically no play in Standard pre-rotation, although it’s seeing plenty in Pioneer. Shredder is just one of those cards that is too good to not see play at some point, so I’ll be keeping my eye out for cheap spells that can compliment this powerful bird advisor.

One last card I’d like to talk about is Wrenn and Seven.

Wrenn is one of the more powerful cards staying in Standard in the fall, although it didn’t see too much play in the current format. Wrenn saw some play in various temur Goldspan Dragon decks and some versions of Mono-Green Aggro. This was due to the fact that you could create multiple Treefolk tokens with Esika’s Chariot. While I’m not sure exactly what type of deck Wrenn is supposed to go in post-rotation, it is worth noting as one of the more powerful Green cards. Mono-Green Aggro keeps some cards in the format like Ulvenwald Oddity and Ascendant Packleader, but loses out on some of its most important cards like Old-growth Troll, Esika’s Chariot, and Lair of the Hydra.

I could see a midrange planeswalker deck with Wrenn and the Wandering Emperor. I’d also be curious about a Jund midrange deck with cards like Graveyard Trespasser. Looking at the New Capenna tri-lands we do get Jund and Naya, so maybe there’s a deck there after all. I’d also be interested in a Bant deck with countermagic potentially, but this is something to further explore when we have Dominaria United spoiled.

Overall, while we lose a lot of sets with Dominaria United we actually have a pretty solid foundation for what Standard will look like post-rotation. This is mostly due to the fact that the cards we keep in the format are just so powerful. With cards like The Wandering Emperor seeing play in every major format as well as Fable of the Mirror-Breaker being a house in Pioneer, it’s easy to see how these cards will become the basis of Standard.

I will say it’s a little unfortunate – I personally enjoy Standard formats right after rotation where there isn’t a clear best deck and the decks are weaker on average. In the current MTG world, cards are printed much more powerful than their predecessors. Although as long as Raffine’s Tower is playable I’ll probably be happy with the format. Here’s hoping Dominaria United brings us some sweet new cards to play with!