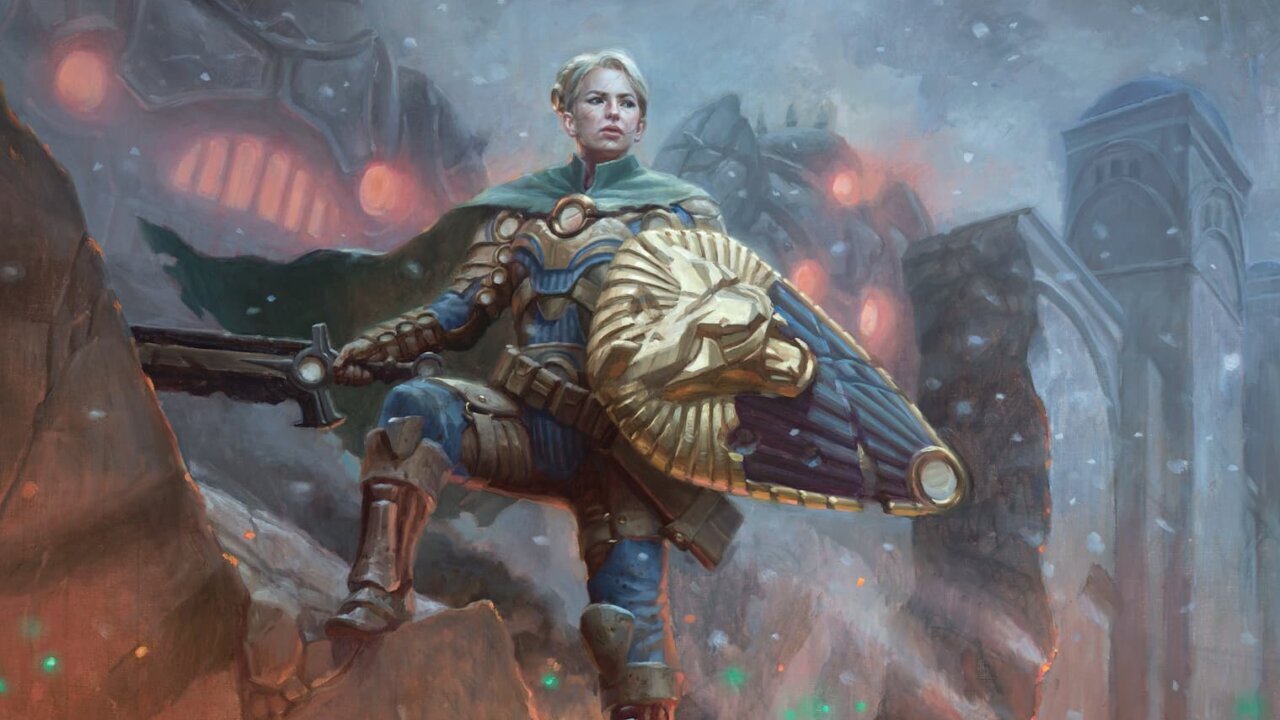 The Brothers’ War is finally over, with full previews from both the set and its Commander companion all finished. And so, as with every set, Commander players can finally start combing through the set for those sweet, sweet legendary creatures.

Brothers’ War is an… interesting beast in that respect, with most of the Commanders focused around capturing the flavor of the set. There’s also a unique skew away from green, which usually provides a lot of the easy gimmes for the ramp-heavy Commander format. All the same, let’s break down what we have been given and pick out the five best options for those looking to match Urza and Mishra with their own carefully-tinkered contraptions.

Mishra comes in at #5 on this list, standing above most random legendary creatures but not making it much further due to a couple different factors. While the ability to create a 4/4 copy of any noncreature artifact is exciting (especially since the change in name lets one copy legendary artifacts), it’s only going to trigger once each turn cycle. The enterprising player can certainly figure out a way around this with trigger-copying artifacts like Strionic Resonator, but there’s better commanders out there that don’t require nearly as much finagling.

If players are dead-set on making Mishra work, there’s one card they need to go all-in on: Sundial of the Infinite. Sundial is an artifact Mishra can copy, but it also taps to end the turn, letting players save all of their 4/4 copies without worrying about an end of turn sacrifice trigger. Combining this secret tech with powerful artifacts like Coat of Arms, Gonti’s Aether Heart or even Idol of Oblivion is a powerful strategy. Adding in vehicles Mishra can permanently animate is another nice touch, especially with the devastating new vehicles from the Warhammer 40k precons.

Just like in the real Brothers’ War, Urza wins out over his brother. Why? It’s as simple as one word: Affinity. Urza having affinity for artifact creatures takes him from an awkward six-mana trap to a lean three-mana machine. The deck is pretty simple: swarm the board with plenty of small artifact creatures to both reduce Urza’s cost and pump up the Construct tokens he creates.

What small creatures should players run in their decks though? Esper Sentinel is an easy first pick, but on the whole it might be worth it to take a close look at “cantrip” creatures like Baleful Strix, Thought Monitor and Combat Thresher. One of the biggest issues with a go-wide deck can be running out of cards, and while draw-on-hit effects like Bident of Thassa or Reconnaissance Mission can help to remedy this, it’s more reliable to have the draw effects on the creatures themselves.

There’s also some really powerful artifact support cards printed in recent sets to include here. There’s two asymmetric board clears, Their Name is Death and Organic Extinction. Losheel, Clockwork Scholar both draws cards and lets his fellow creatures swing out without fear of blockers. There’s Esper Sentinel, Master of Etherium and even good old Steel Overseer. It is shockingly easy to put together a deck of tiny, deadly artifact creatures, all in a tight, synergistic package.

Despite Brothers’ War’s lean away from the natural world to focus on the constructed and artificial, Wizards of the Coast couldn’t resist slipping in one treat for green players. Titania, Nature’s Force is an absolute powerhouse, letting players recur Forests from their graveyard but also turning those lands into 5/3 Elementals. That’s an effect just begging to spiral out of control, especially in a format like Commander.

Boundless Realms, Scapeshift, Traverse the Outlands and Reshape the Earth — all cards that end the game on their own when Titania’s on the battlefield. Green is the color that’s meant to ramp, and giving them a payoff for doing so just lets them go all-in on their greatest strength.

Mono-green does have one crucial weakness though — card draw. A wrath can often leave them scrambling to rebuild as other decks refill their hand without breaking a sweat. The key here is to run the few sources of protection from board wipes Green has managed to build up over time, whether it be a simple Heroic or the mana-hungry Soul of New Phyrexia. Green is never going to outdraw a blue or even black deck, but they can outrace them, using key cards to keep the scales tilted in their favor.

While most cards from the actual Brothers’ War set are meant for various 1v1 formats, Gix is clearly built for Commander. He’s essentially a mono-black Edric, Emissary of Trest — rewarding his controller’s opponents for going after each other instead of focusing on the very real threat he represents. By making use of his effect, players can build up an oversized hand in no time.

And once they do, all that’s required is to dump it into his activated ability. Pitching an entire hand sounds like a sharp downside, but players get to exchange those cards for spells they can now cast for free. There’s also ways to get around the first downside, from retrieval artifacts like Bag of Holding to niche instants like Shadow of the Grave.

The final key with Gix is to know when to activate the last ability. Because it pitches any number of cards but only ever costs seven mana, players should aim to activate it as few times as possible, with the highest payout each time. This also means activating it during the end step of the player before them in the turn order, since Gix lets them cast the spells at “instant speed.” This gives opponents the shortest possible window of interaction, as Gix’s controller untaps right after casting their new threats.

Myrel is the absolute cream of the crop. That feels weird to say about a mono-white commander, but Wizards has finally succeeded in pushing White’s strengths to their absolute limit so they can play at the same level as other colors. Myrel looks on the surface like a Soldier-tribal commander, but her true power runs far deeper.

Her second ability draws from a potent niche first established by Najeela, the Blade-Blossom. While Najeela had access to all five colors and cost a mana less than Myrel, both work in the same way to double up a player’s creatures each turn, so long as they run creatures from a specific tribe. Myrel’s even comes with new Soldier tribal cards from Brothers’ War like Siege Veteran and Rescue Retriever.

But the effect that makes Myrel feel not just powerful but oppressive is her first one, a static ability that prevents opponents from casting spells or activating abilities during her controller’s turn. That’s massive. Restricting removal and interaction to sorcery speed means that as long as Myrel’s controller can reliably draw a piece of artifact protection like Lightning Greaves or Swiftfoot Boots, they can suit up their commander in peace.

Opponents then hope to have to draw a way to remove that artifact first, before they can even begin to worry about Myrel. Some black or blue decks might not even be able to do so at all. A well-built Myrel deck is truly a well-tuned machine, pumping out clockwork soldiers with unearthly efficiency and swiftly reducing opponents’ life totals to zero.