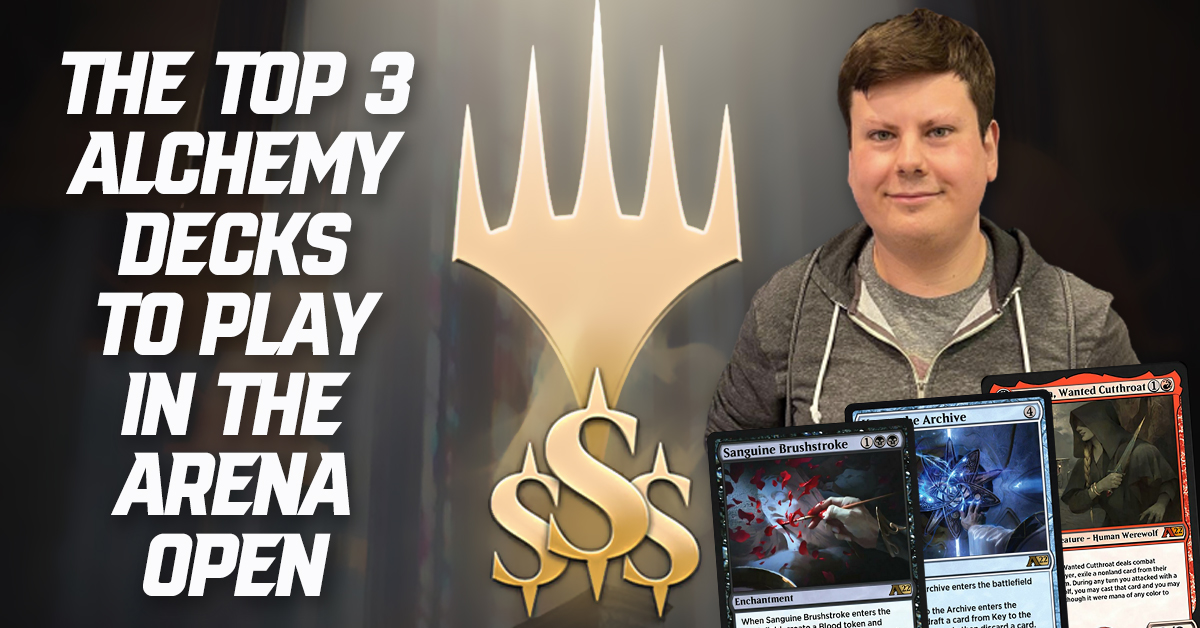 With the first Alchemy Arena Open just days away you’re probably wondering what deck you should play. Alchemy has proven to be a completely different format from its Standard counterpart, with the addition of new digital-only cards and card rebalances. If you’re thinking about spending your hard-earned gems in this weekend’s $2500 open, take a look at what I think are the top three choices to play!

Best of One > Best of Three

Before we dig into the different deck strategies of the format, if your primary goal is to win the Arena Open you should play the Best of One event option rather than the Best of Three option. While you may be a better player than your opponent on average overall it’s mathematically recommended to play Best of One if your plan is just to get to Day 2.

If you’ve been reading my articles you’ll know by now that I’m a complete Azorius Control fanatic. While I enjoy control decks in general I especially think Azorius Control is a perfect choice for this weekend’s Open. Here are the reasons why:

While Gruul Werewolves isn’t usually my Alchemy weapon of choice, I think it’s extremely advantaged in Best of One. Gruul Werewolves is first and foremost an aggro deck that can quickly put opponents on the backfoot with new additions from Alchemy: Innistrad such as Ferocious Pup. Here’s why the deck is suited to dominate in this weekend’s open:

The main reason why I wanted to include this deck in this article was the impressive win rates I’ve seen this deck have in Best of One. Take a look at Crokeyz’s Alchemy Naya Werewolves via Untapped.gg:

While Crokeyz has played only 22 games with the deck so far he has almost an 80% win rate on the play with about a 70% win rate on the draw. That’s an incredibly impressive win rate for any deck to have, but it shows how in Best of One you’re more likely to win with a hyper aggressive strategy. I haven’t played much with the Naya version of the deck, but Brutal Cathar and Inquisitor’s Captain are both strong inclusions. I’m less interested in the White removal spells but I could see them as nods to losing the die roll in the mirror, giving you an edge against traditional Gruul. With mana-fixers like Jaspera Sentinel and Magda, you have to rely less on your mana base to draw your White sources.

Overall, I think Gruul/Naya Werewolves is a fantastic pick for this weekend and especially good if you’re lucky at winning die rolls. All joking aside, this is a strategy that can quickly put pressure on an opponent and punish their slow draws.

Mono-Black is my final pick for the deck you should play this weekend in the Arena Open. While I’ve found myself consistently winning with the deck using Azorius Control, I will say that a lot of my games are super close. Aside from the Azorius matchup, there are a few key reasons why I like this strategy:

Overall, I like this deck because it has game against both creature and control strategies. Your wraths are all live in whatever matchup you face. The deck also has some combo kills with Voldaren Bloodcaster and Sanguine Brushstroke. You get some use out of your sideboard with Eyetwitch, Necrotic Fumes being a premium removal spell that you’ll usually have a sac-outlet for. I also like that you can target your opponent with Fell Stinger’s etb trigger, but that’s a pretty rare way to enact a kill.

I do think the deck has its inherent weaknesses. If you lose the die roll to a deck like Gruul you’ll have to survive until you can cast a Meathook or Blood on the Snow just to undo their fast draw. At that point you’ll have to figure out how accrue resources before they can rebuild or kill you with Lair of the Hydra. I like that the deck can pressure Azorius Control from multiple angles but you’re still very susceptible to Divine Purge. Azorius can also go over the top with Key to the Archive finding Approach of the Second Sun. Once Azorius finds an Approach Mono Black is under serious pressure to enact a kill, which can be extremely hard to do if you don’t have a board pressence or an active Brushstroke.

I think Mono-Black is still a strong choice, however. The deck rewards play skill most of all and if you’re confident in your matchups you should have no problem getting to seven wins. I do think in Best of One you’ll see less midrange and control decks in favor of aggressive strategies, so if you’re built to defeat those decks you’ll be set on qualifying for day 2.

While Alchemy has become a bit of a controversial format for Magic, the format has proven to have a swath of different unique strategies that reward both player skill and individual card choices. If you’re planning to win the Arena Open but not sure what to play, any of these three strategies will be a solid choice. While my first choice is definitely Azorius Control, Gruul and Mono-Black are no slouches. Ultimately, it comes down to player preference and experience. Have fun, good luck, and I hope you score some cash at the end of Sunday.