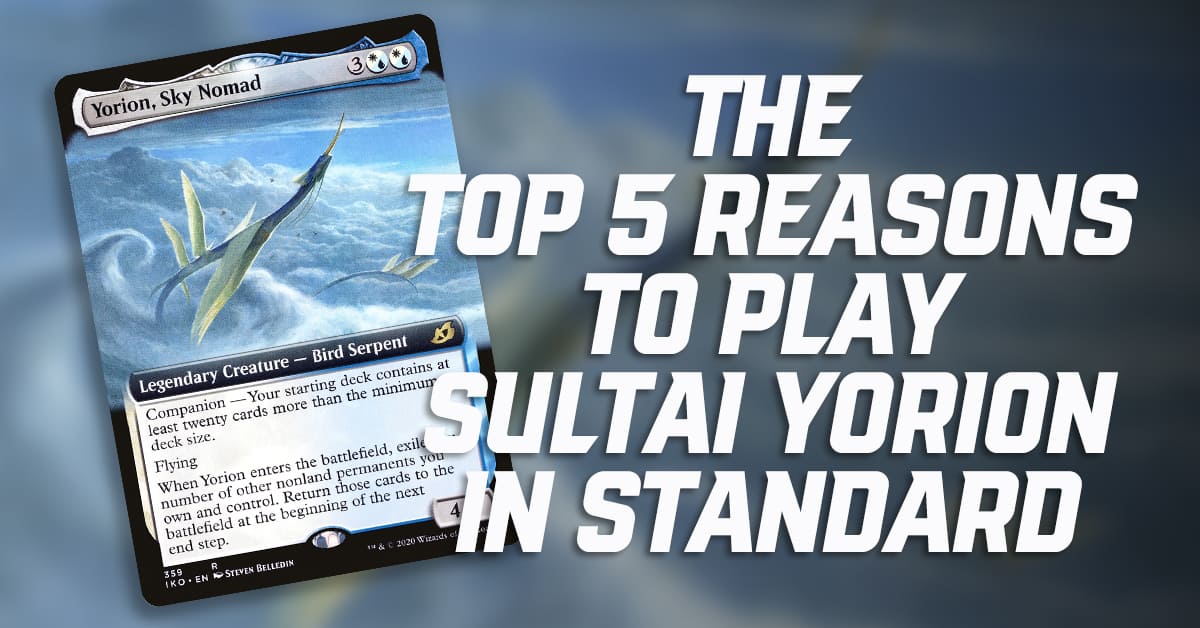 There are a multitude of reasons to be playing Sultai Yorion in Standard. If you’re a control aficionado like myself, you’re drawn to wraths, powerful finishers, and useful answers capable of stopping your opponents in their tracks. While the Standard format is evolving, let’s take a look at some of the reasons why Sultai Yorion is worth (digitally) sleeving up.

Out-mana Other Control Decks. Outplay Them Too!

While UB Yorion was already a viable Standard strategy, the inclusion of Binding of the Old Gods as well as some other green sideboard cards pushes the deck into a top tier category, utilizing Yorion to “Maelstrom Pulse” multiple threats while also getting to ramp. This sets Sultai Yorion aside from other potential control decks in the format. Control decks aim to get to a point in the game where they have lots of mana and their disposal while emptying their opponent of their resources. Binding of the Old Gods does exactly this, stripping your opponent of their best threat while also pushing you towards inevitable victory.

I’ve played against Sultai mirrors twice in the past few days of playing the deck, and easily 2-0’d both of them. How? I followed a simple rule of playing control mirrors from my good pal Adrian Sullivan.

Adrian, a Pro-Tour Top 8 competitor, Grand Prix champion, and fellow control mage, has been streaming lots and lots of Jeskai Control in Historic. Every mirror I’ve seen him win revolves around two things: hitting a land drop every turn and utilizing the ever-living crap out of Castle Vantress. Since a bulk of these mirrors revolve around “draw-go,” it’s vital you hit your land drops and never have to end up discarding to hand size.

One interesting aspect about the Sultai Yorion mirrors in particular is that every card in your deck has value. Elspeth’s Nightmare may be a delayed three-mana Duress, but it’s better than doing nothing. Bloodchief’s Thirst takes out shark tokens, Ugin, and Ashiok, Extinction Event can wipe out a board of shark tokens and Koma, and Heartless Act can snag a Yorion or a Koma before some serpent tokens join the party. Every card has value. Consequently, every threat in your deck can be answered, so sequencing and valuing your answers matters. Ideally, you want to be at a point in the game where you can either answer threats or present your own while activating Castle Vantress to dig for more action. This is why I think Castle Vantress and Field of Ruin are some of the most important cards to have access to in the mirror.

Sorry Doomskar, you don’t make the cut. Fact of the matter is that too many threats in Standard, whether they be Seasoned Hallowblade, Kroxa, or Feasting Troll King, aren’t beaten by a simple “Wrath of God” effect. Black’s various wraths give more flexibility, and while Extinction Event may not clean up every creature on the battlefield, you can Binding of the Old Gods or Heartless Act whichever threats might stay around. Shadow’s Verdict in particular even deals with threats before they even enter the battlefield, such as exiling a Kroxa or Phoenix of Ash. Pestilent Haze is a great sideboard option against Mono White, easily cleaning up Alseid of Life’s Bounty, Selfless Savior, and Seasoned Hallowblade all at the same time. Shatter the Sky and Doomskar just don’t do the same job and have even worse spot removal to back them up.

In one of my matches in the Standard metagame challenge on Arena, I was paired versus UR Tempo. On the play game three I was able to bait some early counterspells and Duress an Essence Scatter, paving the way for my turn five un-countered Elder Gargargoth. I can assure you my opponent conceded the game not too many turns later. Whether it be Elder Gargaroth or Koma, Cosmos Serpent, green gives access to cards that are absolute hammers. How many aggro and midrange decks are ditching their spot removal against you post-board? They can’t afford to keep around Heartless Acts against Yorions and Shark Typhoon tokens. That’s where you get them! What makes Gargaroth and Koma so potent is that they have the potential to end games on the spot, providing a snowballing advantage that is sometimes impossible to undo.

Sultai Gets the Best Answers

In addition to the bombs and wraths you can play, Sultai also has diverse answers that hit some of the most pressing threats in the format. Before Kaldheim, Standard had fallen victim to the likes of Embercleave and The Great Henge. While these two cards are certainly game-ending and widely played, Sultai levels the playing field with Binding of the Old Gods. Showdown of the Skalds is also one of the worst spells you want to see resolved from across the table, so having access to Disdainful Stroke is key. Since every deck has four-mana threats or is just an aggro deck playing Shodown, Stroke easily becomes one of your best, if not THE best counterspell in your deck.

Elspeth’s Nightmare is another great answer to be playing in a format where Naya Adventures and Jund Sacrifice are some of the more popular decks. Since these decks are two-for-one-ing you with cards like Kroxa, Tymaret Calls the Dead, Showdown of the Skalds, and Edgewall Innkeeper, you need cards that do the same – nightmare, in this case, being able to deal with an early board presence while stripping your opponent of one of their rare or mythic non-creature spells before they hit the battlefield.

While the Standard format will continue to evolve, Sultai can keep up swapping out certain cards weekly or transforming into a new deck entirely. While there are successful builds of Sultai out there that are either more spell focused or more Yorion-target focused, playing cards like Llanowar Visionary and Atris, Oracle of Half-Truths main, the deck can adapt to each new development in Standard. One major lesson I learned about Zendikar Rising Standard was just how potent some of the threats were and how limited some of the answers were. I tried my hand at playing UB Yorion in that format, but I found myself constantly losing to cards like The Great Henge and Trail of Crumbs.

Binding of the Old Gods lets the UB deck interact cleanly with these threats and catch up with Yorion triggers. While Sultai Yorion won’t be the top deck in the format every single week, the deck has a lot of room to accommodate cards based on what’s trending. Some weeks you might want to ramp out an Elder Gargaroth on turn four. Some weeks you might want to be more cautious and play more counterspells if the mirror gains popularity. The amount of Field of Ruins and Castle Vantresses you play in your main deck and sideboard will depend on the ebb and flow of Standard, as decks become more refined and people begin sticking to certain strategies.

To quote my mentor Mike Flores in my favorite article of his, “How to Win a PTQ” Mike states: “Stay flexible. There are no permanent alliances to colors, to deck preference, to single card choices. Black might be purple, orange, or even Botswana next week. Change or die.”

All in all, Sultai has a lot of play to it. I’ve honestly had more fun playing this deck in a week than I did playing any control deck in the entirety of Zendikar Rising Standard. The deck has a ton of intricate choices and deckbuilding decisions to make, requiring you to be up to date with the hottest tech in the format. The mirrors harken back to some of the best control mirrors I’ve played in my time playing Standard, where each card has value and playing perfectly (or near perfect) is what pushes you to victory. So for now, against my previous advice, ditch the Doomskars and pick up some Binding of the Old Gods and go to town. Be ready to Disdainful Stroke some Shodown of the Skalds and slam an unexpected Elder Gargaroth into play!