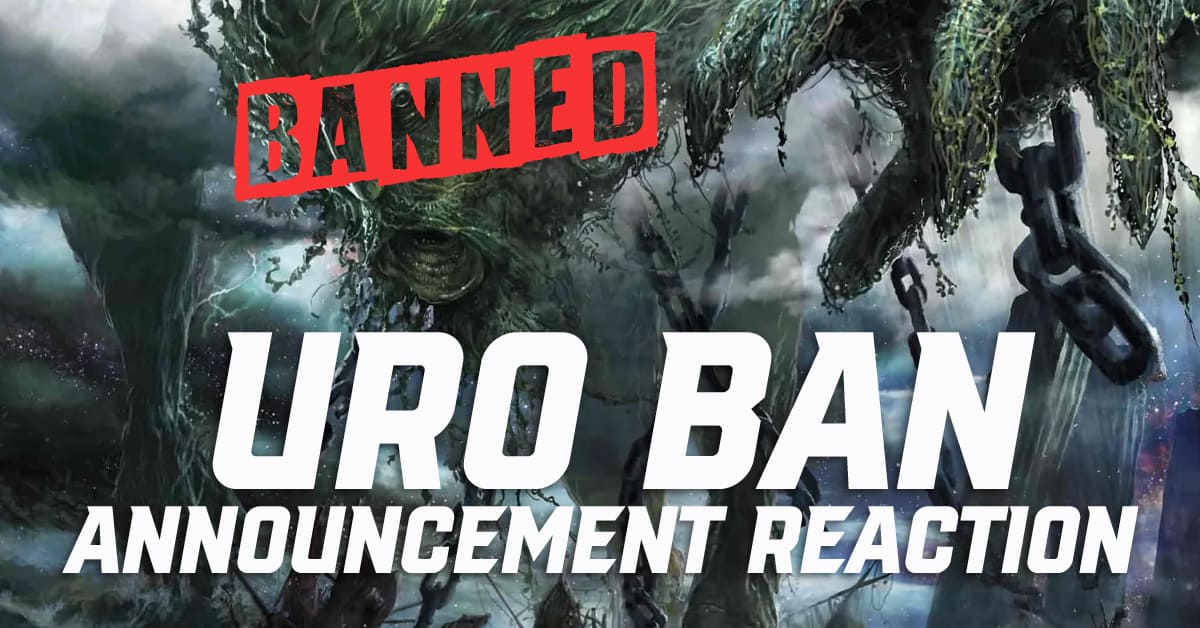 I went to bed Sunday night hopeful the morning’s ban announcement would provide a new and exciting Standard format to play. “Maybe UW control will be playable again,” I thought to myself as I drifted off into a deep slumber. However, Monday’s ban announcement shattered any hope I had.

Okay I’m only slightly joking. Uro was a dominating force in Standard ever since its printing and desperately needed to go. However, Uro was not a driving force in the Omnath ramp decks. Uro is a great tool however it’s easily replaced by a number of three mana ramp cards including, Dryad of the Illysian Grove, Scale the Heights, Roiling Regrowth, Beanstalk Giant, and Cultivate. Uro did provide resilience against the control decks of the format, however, such as Sultai, and provided nice lifegain alongside Omnath versus Mono Green and Mono Red aggro. However, I’m not sure if banning Uro makes a real dent in the Omnath ramp decks. While I highly suspect another ban and restricted announcement will arrive soon, the fact of the matter is that Uro is banned. So where does that leave Standard?

We don’t need to pretend that Omnath is not one of the best, if not still the best deck of the Standard format. This past weekend’s SCG and MTGO events provided a bevy of Omnath lists, with Omnath clocking in a 55.12% of the SCG Qualifier #6 metagame, and 67.09% of the SCG Season Two Championship metagame.

Tangram’s list is pretty stock, with a few removal spells aimed at taking out some of the problematic cards in the mirror. I actually like dividing up the interaction spells to include Spikefield Hazard, Mystical Dispute, and Thundering Rebuke as opposed to going all in on Negates and Disputes. Mazemind Tome is a card I’ve seen pop up in a variety of these lists and I think it’s a great way at attacking the control strategies post board.

Losing access to Uro makes the lists with multiple copies of Terror of the Peaks a little worse, but I’m sure the Omnath decks will rely more heavily on Beanstalk Giant now, if they weren’t playing four copies already.

Looking at the Standard Challenge from this past weekend, SunofNothing’s winning decklist has a couple of cards that stand out to me from the “traditional” Omnath list. This list has a nice combo built into it for the mirror match: Ruin Crab and Glasspool Mimic. This version abandons the Kenrith, Terror of the Peaks, Ugin, or Felidar Retreat package for one tuned specifically for the mirror, focusing on casting a Genesis Ultimatum and milling the opponent out. Results speak for themselves and this seems like a great way of attacking the mirror since so much of the game is spent taking lands out of your deck, drawing cards, and flipping over cards from the top of your deck. I feel like a lot of games come down to the Omnath player having sometimes less than 20 cards in their library – which only equates to six or seven Ruin Crab triggers. What excites me the most about this decklist and particular build of the Omnath deck is that it only utilizes one Uro (which is easily replaceable) and with Uro now gone from the format you don’t have to worry about your Ruin Crab binning an opposing titan (unless they are of course playing Kroxa).

Michael Bonde (Lampalot) took down the Standard Zendikar Rising Championship Qualifier this past weekend with another Omnath, and surprisingly Uro-less, deck. Temur Adventures with Omnath is not anything new, I spotted Emma Handy piloting a similar decklist for the VML tournament. In my Zendikar Rising spoiler article I talked about Uro and Lucky Clover being defining cards of the new Standard format, and while Uro may be out Lucky Clover is still dominating tournaments. This is a pretty stock list of Temur Adventures, that has trimmed some cards around the edges to make room for four Omnath. The Giant Killer is a pretty interesting choice, it’s a solid answer to opposing Omnaths and a way to also remove Beanstalk Giants (which is a nice flavor win as well).

Now if you aren’t interested in joining the cult of Omnath, there are some other ways to attack the metagame that are benefited from Uro’s timely demise.

Despite this also being an Uro deck, the shell of Corey’s deck is essentially just U/B. The green cards can easily be swapped out, although I do like the sideboard Gargaroths. Corey did lose to a mono-green aggro deck in the last round playing for top 16. Heartless Act did not look so hot against Yorvo, Garruk’s Harbinger, and Stonecoil Serpent. If there is a rise in aggressive decks following the Uro ban I could definitely see copies of Shadow’s Verdict making it into the maindeck of this list.

Alfredo Torres’ Gruul Adventures is another great place to start after the Uro ban. This deck puts on a lot of pressure and has some easy ways to remove Cobra and Omnath in the form of Spikefield Hazard, Bonecrusher Giant, and Primal Might. I think a test of this deck will be how good it stacks up against new UB control decks, or potentially UW control decks. Edgewall Innkeeper is a nice way to have some resilience against these decks.

It wouldn’t be a Roman Fusco standard article if I didn’t include a UW control list:

Not sure if this is even remotely good in the face of Omnath. It honestly might be a lot worse than UB since this list has less targeted removal. I do like having access to Shatter the Sky if we see a rise in Mono Green and Gruul Adventures. I also like having access to Dream Trawler as a way to close out games vs Temur Adventures. Overall, I’m not sure if this can compete with the new best decks of the format, but I’ll be giving it a go.

Overall the Uro ban was a much-needed change to Standard, but it doesn’t solve some of the underlying issues of the format. We’re still subject to not only Omnath ramp strategies, but other oppressive cards such as Lucky Clover and Embercleave. While I do think more bans will probably be needed, with Uro being gone it’ll be interesting to see how the Omnath decks adapt and if other decks will have their time to shine.

What do you think about the Uro ban? Will it really have a major impact on the Standard metagame? Let me know your thoughts. Thanks for reading!