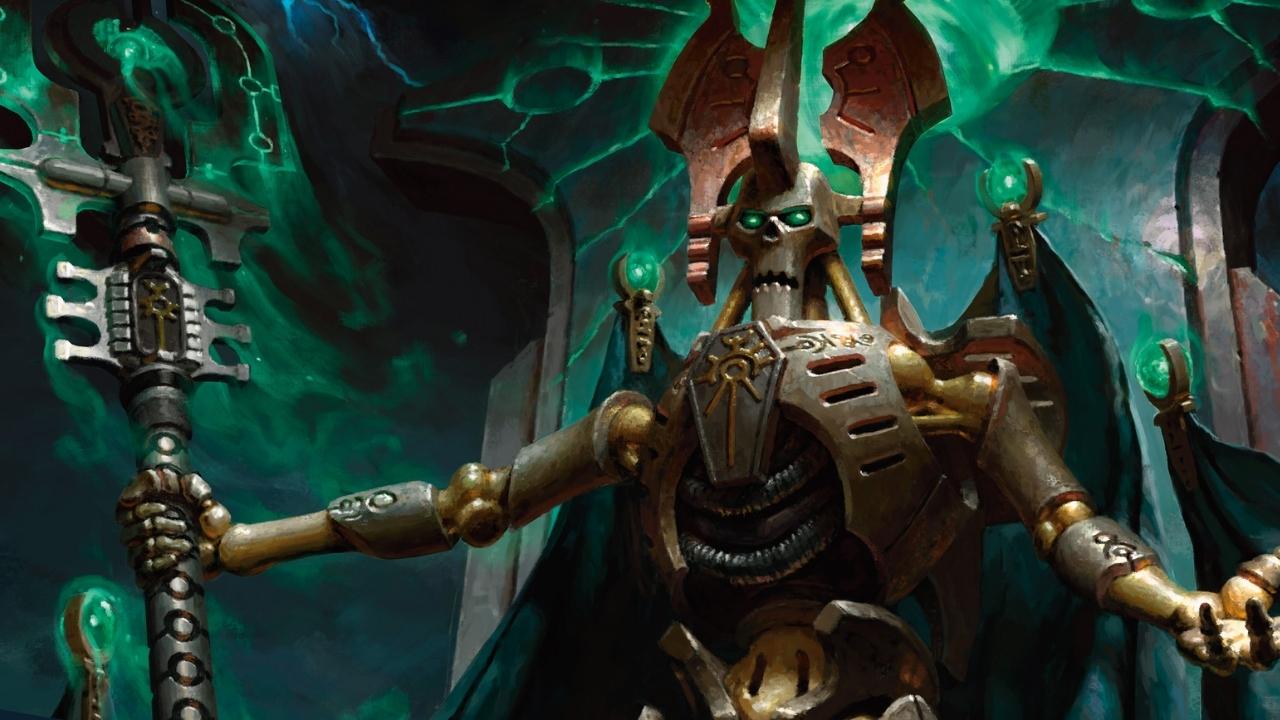 Monocolor in Commander is a tricky business. The advantages gained from playing even one other color are massive, as each one works to shore up the weaknesses of another. Strategies that usually benefit from being monocolor, like aggro, are weakened in Commander, due to the format’s increased life total and multiple players.

It’s not impossible to pull off – commanders like Krenko, Mob Boss and Yawgmoth, Thran Physician certainly prove that, but it’s rare that Wizards puts out a monocolored precon. Necron Dynasties is actually the first such precon to be released since Commander 2014’s monocolored planeswalkers. As such, it has a lot to live up to. Let’s see if it’s up for the task, by pulling apart its new cards to find out what they contribute — both to their deck and to the format as a whole.

The deck’s face commander is Szarekh, the Silent King, and he’s awful. There’s no getting around it, he’s simply not a very good commander, and not even a very good card. For four mana players get a flying 3/4 that draws a card when it attacks. Or at least, it draws a card if one of the three cards it mills are an artifact creature or vehicle. Why doesn’t this just say artifact? The deck has plenty of noncreature artifacts Szarek won’t draw.

In fact, why doesn’t it say return to the battlefield instead of to hand? A commander that reanimates a particular subset of creatures when it attacks isn’t something new, with both Olivia, Crimson Bride and Drana, the Last Bloodchief doing exactly that. Players are better off dropping Szarekh entirely and letting Imotekh the Stormlord take the stage. For the same amount of mana they now get a commander that rewards the deck’s go-wide artifact strategy and its unearth subtheme, at a terrifyingly efficient rate.

The rest of the deck’s commanders are a mixed bag. Trazyn the Infinite and Illuminor Szeras are both interesting in their own ways. Trazyn is the most obvious kind of combo-bait, enabling the same kinds of synergies as Mairsil the Pretender and Necrotic Ooze, but doesn’t justify being in monoblack by that ability alone. The same is true for Illuminor Szeras, who makes a fantastic amount of mana but doesn’t really scream “commander,” feeling more like a card to run in the 99 of a deck with access to more colors

No, the deck’s only other option for a true alternate commander (aside from Imotekh) is Anrakyr the Traveler. Like Szarekh, Anrakyr has an attack trigger, but does far more than draw you a card, instead cheating mana costs by letting the player use their life total for a single artifact spell. This obviously invites comparisons to Nashi, Moon Sage’s Scion. The difference between the two is how much selection Anrakyr offers, able to cast any artifact from hand or graveyard instead of merely one of two exiled cards.

As Many Artifacts As Possible

The strategy for Necron Dynasties is actually pretty simple. Get as many artifacts as possible, often in the form of 2/2 Necron Warrior tokens. Royal Warden is only one such token maker, but also one of the most efficient, with five bodies for three mana and a four mana Unearth ability. Another option is Their Number is Legion, which serves as a great mana sink. While inefficient at four mana before increasing X, the lifegain is a nice way to counteract the deck’s many cards which require life as an additional cost.

I could write pages on Biotransference alone. The card makes all creatures count as artifacts in addition to their other types, even when not on the battlefield. This is relevant to the deck’s many commanders, but also to so, so many of its effects. Necron Dynasties has cards that care about when artifacts enter the battlefield, when artifacts die, when artifacts are milled, and when artifacts leave the graveyard. The only issue with the card is that it’s an enchantment, which feels a bit odd for a card that’s all about artifacts.

Another great way to make a ton of artifacts is Canoptek Scarab Swarm, which exiles a graveyard and makes another 1/1 flier for each artifact or land exiled that way. It’s a bit of a puzzling card, since it’s likely to get more hits if you target your own graveyard, but deprives you of further resources if it does so. Hitting an opponent’s graveyard makes sure to get rid of their future options, hopefully making a few more 1/1s in the process. It’s also yet another card that benefits from Biotransference.

Canoptek Spyder is a great source of card draw. It’s most comparable to Soul of the Harvest, but at one less mana and with flying instead of trample. It’s questionable whether nontoken artifacts or creatures are easier to acquire, but it’s definitely worth playing in any affinity-type deck.

Push Through For Lethal

With all these Necron Warriors, it’s important to have proper sources of evasion. Black doesn’t have access to something that’d grant all its creatures flying or trample, but it does have menace. Menace is best with lots of small creatures, which is exactly what all these 2/2s are. Skorpekh Lord gives all of your artifact creatures menace, and even makes them 3/2s to greatly increase their lethality.

Triarch Stalker is another great way to grant menace, but with a particular twist of its own. It only grants menace to creatures attacking one of your opponents at a time. This seems worse than Skorpekh Lord… until you realize it grants menace to any creature attacking that opponent. Effects that encourage your enemies to fight amongst one another are never bad in Commander, especially when they’d probably be worth playing anyways.

Their Name is Death is the best kind of wrath. It destroys each creature on the battlefield, but in the right deck it only hurts your opponents. Six mana isn’t even a terrible rate for a wrath in black, which usually only has access to Crux of Fate at five and Damnation at four. There’s a chance opponents have some artifact creatures too, but unless it’s a mirror match they’re more likely to be incidental than crucial.

And while black can’t grant its creatures flying en masse, it does have access to some truly great flying beaters. One of these is the Necron Monolith, a flying 7/7 vehicle for seven mana. Crew 4 is easily attainable with the number of tokens the deck makes, and it’s indestructible to boot. That might not be enough to make it playable on its own, but the card’s attack trigger both mills you and makes more 2/2s to help crew it going forward.

Necron Dynasties is a promising start to a great monocolor deck, but it’s missing something crucial. The first is more effects like Psychomancer and Shard of the Void Dragon, both of which trigger off of artifacts being put into the graveyard. Beating an opponent down with 2/2s is all well and good, but in black it’s often better to have both a sac outlet and a way to benefit off of sacrificed permanents.

The second is treasure. While some effects like Psychomancer specify nontoken when it comes to the artifacts they care about, Shard of the Void Dragon absolutely does not. Treasure would help both to ramp it out and turn it from a powerful card to an absolute devastator. Treasure can even be sacrificed at instant speed, meaning the resources needed to pump up the Void Dragon wouldn’t have to be spent until absolutely necessary.

If you do pick up Necron Dynasties, add some treasure generators like Pitiless Plunderer, Black Market Connections and Grim Hireling. Those are only the tip of the iceberg, and with payoffs like Disciple of the Vault or Nadier’s Nightblade, being in monoblack seems less like a disadvantage and more like a brewing challenge for the ages.