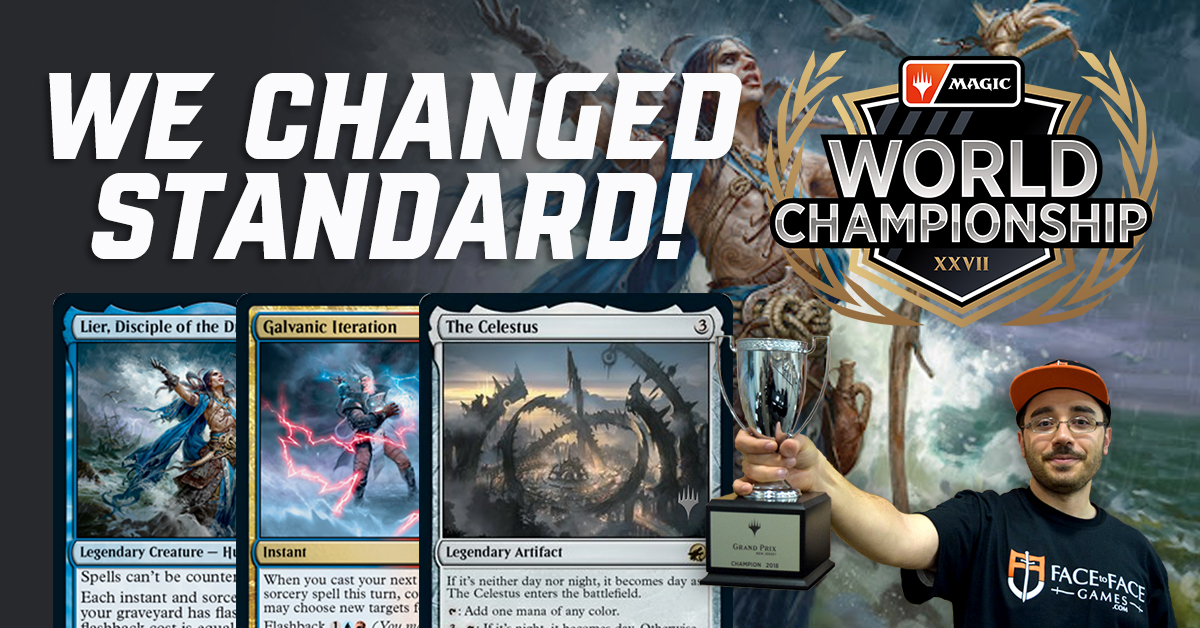 By “we” I mean my testing squad for the 2021 World Championship – Gabriel Nassif, Matt Sperling, JMM and myself, of course. For those of you who weren’t following coverage, my team extensively worked on and created the breakout deck of the tournament: Grixis Lier. The deck has now taken the metagame by storm.

While Grixis Lier has a lot in common with the standardized Izzet Epiphany lists, there are some key differences worth noting. For one, we play Black! Lier, Disciple of the Drowned was the focus of our deck and we wanted some great cards that synergize with this amazing mythic. Duress was an easy decision. For playtesting purposes we started with a few copies, then tried just one, and eventually settled on two copies being the perfect amount to have in the maindeck.

We knew we needed a couple of strong answers for the Izzet mirrors as well. This led us to sideboarding in Go Blank in that matchup. You haven’t lived until you’ve cast Go Blank after a Galvanic Iteration to not only make your opponent discard four cards, but to lose their graveyard as well! Imagine doing it twice! (lol).

However, greatness comes at a cost. To add in these strong Black cards we had to hurt our mana base a little bit. It was nice not having to play around the liability that Snarl lands bring, but too many pathways or Shipwreck Marsh or Haunted Ridge can also hurt you in other ways. Either we cannot play any basic lands, (which puts us at a disadvantage against Field of Ruin), or we don’t play Field of Ruin at all (which is what we ended up deciding on). What sucks is that Field of Ruin deals with Faceless Haven, which is already a difficult threat for us to deal with.

Let’s go over the Izzet deck the Czech team came with then look at our own and examine the difference. Here’s the list that Ondrej Stratsky made Top 4 with:

One interesting card choice this team decided to include was four copies of Unexpected Windfall. The great aspect of this card is how it synergizes with Galvanic Iteration, allowing each copy to give you two more cards and two treasures. This let their deck take on a whole new dimension of acceleration that we lacked in our team’s testing unfortunately. However, either by luck or fate we dodged most of the Czechs and got lucky when we did get paired against their team.

Our team couldn’t get behind including Divide by Zero in our deck. The idea of a three-cost bounce spell that grabs a mediocre lesson card wasn’t appealing enough. We thought it would be better to play more proactive cards in this spot instead, namely The Celestus. The other major difference here is we found Lier, Disciple of the Drowned and they either didn’t or didn’t like it. Our teams concluded after the tournament that Lier was exceptional on its own, and we were almost guaranteed to win any game we untapped with it.

The most notable thing about our list is all the one-ofs. This is a quintessential attribute of all of my brews, but there are reasons why I love singleton copies of cards. Ultimately the removal we played each came with a drawback. Diversification was a nice way of reducing dead cards in matchups. With The Celestus, we could cycle away cards that we didn’t need against a particular deck.

Now let’s talk about the overperformers: Galvanic Iteration, Prismari Command, and Expressive Iteration. Galvanic Iteration with Alrund’s Epiphany is of course the “combo” of the deck. There are a lot of games where it really shines, copying Prismari Command or a Demon Bolt. The flashback on Iteration allows it to become an additional threat later in the game. Expressive Iteration is the card advantage glue that holds the deck together. Having it be a way of grabbing extra lands or spells is extremely valuable, don’t even think about cutting a copy from the deck! Prismari Command just being the best answer available for Esika’s Chariot was clutch, but using the treasure token to ramp into an Alrund’s Epiphany or Burn Down the House was the decider in multiple games.

We can’t talk about the overperformers without mentioning the underperformers: Duress, Mind Flayer, and Power Word Kill. Duress was boarded out in a lot of matchups and really is only good versus decks with a lot of countermagic (countermagic being on a decline in decklists already). Mind Flayer ran into a lot of Blizzard Brawls and Snakeskin Veils. Having our five drop disabled by a one mana spell was backbreaking. Power Word Kill’s drawback of not hitting Dragons was the simplest reason this card ended up being a liability against Izzet Dragons.

This is how my team decided we should try to sideboard against each Worlds competitor:

That’s all I have for now, but look forward to future articles for more updates on Grixis Lier as things develop further in standard. Thanks for reading!