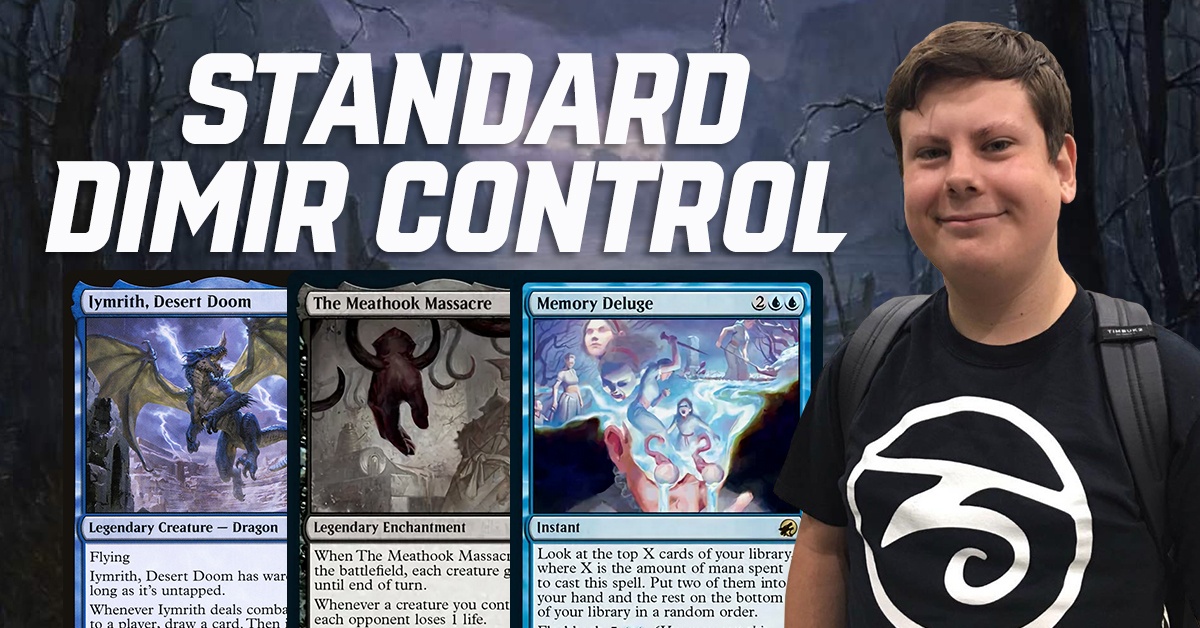 There’s nothing like exploring a Standard format where the options are wide open. With Innistrad Midnight Hunt, there are a ton, and I mean A TON of different decks you can play, in a variety of archetypes. You like control decks? We got em. Midrange piles? We got em too. How about some White Weenie? I gotchu. From scouring decklist after decklist it’s clear that the possibilities are endless.

While Midnight Hunt may champion a diverse Standard format, it is worth noting that a lot of the decks are defined by the power level of some of the rares and mythics, most notably Wrenn and Seven, Goldspan Dragon, Esika’s Chariot, and Alrund’s Epiphany.

These four cards make up the majority of some of the most represented archetypes: Gruul aggro, various non-Delver Izzet strategies, and midrange Wrenn/Storm the Festival/Alrund’s Epiphany decks. I’d also argue Blood on the Snow as another big contender with the various Black-based snow decks. With all of these different archetypes it’s hard to narrow down what might be the format’s “best deck,” but honestly that might be a good thing. We’ve been plagued by recent Standards where certain archetypes have been the clear best decks of the format, so it’s a nice reprieve to have a format where it’s not entirely clear what’s the best deck.

After agonizing over what to play in Standard I came across this top Mythic Dimir Control list on Twitter:

Cho Jaeseok’s list seems like a great way to attack the metagame. Let’s take a closer look at the decklist:

This honestly feels like a pretty standard control shell. We have targeted removal, a couple of wraths, draw spells, and of course, end game finishers. Let’s talk about a couple card choices.

First up is Iymrith, Desert Doom. Iymrith is a card that’s seen some play in Standard, but in this list specifically it actually has a number of interesting applications. Iymrith acts as one of the deck’s premier finishes, meaning you probably want to protect it with counterspells before hastily attacking into a removal spell. A 5/5 flyer for five mana blocks Goldspan Dragon and Ashmouth Dragon effectively, however it rarely will attack through a Wrenn and Seven token. It’s important to keep Wrenn in mind, especially when thinking of how to sequence your removal spells. If you fire off an Infernal Grasp when you could’ve Soul Shattered, it may cause problems for you in the future where you can Soul Shatter a Wrenn but not deal with the token, whereas Infernal Grasping the token and attacking Wrenn takes care of both threats.

One aspect about Iymrith in this list that I really appreciate is how easy it is sometimes to draw multiple cards on the attack trigger. Usually, control decks aim to have an ample hand full of removal and counterspells to deal with their opponents’ threats. However, with cards like Siphon Insight and Saw it Coming it’s all the more easier to ‘dump’ your hand while still having multiple resources. In one game I was able to foretell Saw it Coming, cast a Siphon Insight, and set up my Iymrith to draw more than one card.

The Meathook Massacre is another solid addition to control strategies from Midnight Hunt. On top of having a versatile wrath, it gives you immediate life gain back and in future turns. A Meathook in play means your Infernal Grasps now make you only lose one life as opposed to do. I remember talking with my friend before Midnight Hunt’s release and hoping for a wrath like Fumigate, and while this isn’t Fumigate specifically, the life gain is incredibly relevant across a variety of matchups.

One card that matches perfectly with The Meathook Massacre is Divide by Zero.

From watching one of control master Andrew Cuneo’s streams with a similar deck I was able to witness the power of returning a Meathook Massacre to your hand with Divide by Zero (while also drawing a lesson from your sideboard!). With decks like Mono White Aggro in the format, this seems like a perfect combination of cards to dismantle that sort of strategy where you can play Meathook for an X cost of 1. I’d definitely consider a copy or two of Divide and a few lessons in the sideboard and would especially be playing Divide and Lessons in a Best of One version of the deck.

Siphon Insight is another card I was stoked to play with and I’m happy it’s found a home in Dimir Control. While at times Siphon might draw your opponent’s bomb (Wrenn, Goldspan, Alrund’s) the majority of the time I’ve been happy with this as a way to not miss land drops while sometimes also finding a threat in the form of a manland. While this card can be a bit awkward since you can’t dig deeper into your deck for specific answers, it is definitely effective at either finding land drops or ways to end the game.

Next up is the land package this deck offers. While four of both manland may seem excessive, it is worth noting these lands come into play untapped a fair amount of the time. Hall outclasses most creatures in the format (aside from large Wrenn tokens) while Hive is a great way of getting around a treefolk token to take down a Wrenn while also removing significant graveyard threats. With various midrange piles playing cards like Blood on the Snow and Storm the Festival, Hive offers a unique way of removing your opponent’s graveyard while acting as a land that enters the battlefield untapped a non-zero amount of the time. Field of Ruin is a great answer in the mirror for removing your opponent’s manlands while also taking out Faceless Haven. I also just love the two copies of field in addition to the four of each manland to outclass your opponent in the mirror match.

Finally, let’s talk about a few changes I’d personally make to the deck and some sideboard options. While Skyclave Shade is a replay-able threat that can pressure your control or Izzet opponent, I’d rather play Poppet Stitcher to potentially snowball the game as opposed to playing just a 3/1 that can be blocked by a manland, token, or dragon. While Poppet Stitcher pairs nicely with two mana counterspells, I’d also consider running some amount of Duress, so you can cast Stitcher and immediately make a token on turn four.

Go Blank is another card that’s impressed me which saw play in the last Standard format and currently sees a lot of play in Pioneer. While we no longer have to deal with cheaper threats like Kroxa, Storm the Festival and Blood on the Snow are serious considerations that control doesn’t want to get out-grinded by. Go Blank taking two cards while removing some of these threats from the graveyard is a nice bonus to Hive of the Eye Tyrant (and I just like the feeling of making my midrange and control opponents discard cards!).

If I were to sleeve up a Dimir Control 75 for an event this weekend here’s what I’d play:

After playing a decent number of matches with this deck on Arena I also found that I was getting flooded pretty often. 26 lands plus four Jwari Disruption in addition to four Siphon Insight felt like overkill, so I cut two Jwari for a Memory Deluge and an additional Infernal Grasp, but could see the Deluge being a second Power Word Kill or the Divide by Zero. While Skyclave Shade may be the correct threat to board into the control and Izzet matchups, I want to test Poppet Stitcher and Duress more, since these matchups will most likely be boarding out their wraths and Stithcer has the potential to snowball a game in your favor. I’m still debating the Divide/Lesson package, but it seems worth it in Best of Three, and especially correct in Best of One matches.

Midnight Hunt Standard is shaping up to be a sweet mixture of midrange, aggro, and control decks. Dimir Control is definitely an archetype near and dear to my heart and I’m excited to test it out in preparation for upcoming competitive Standard events.