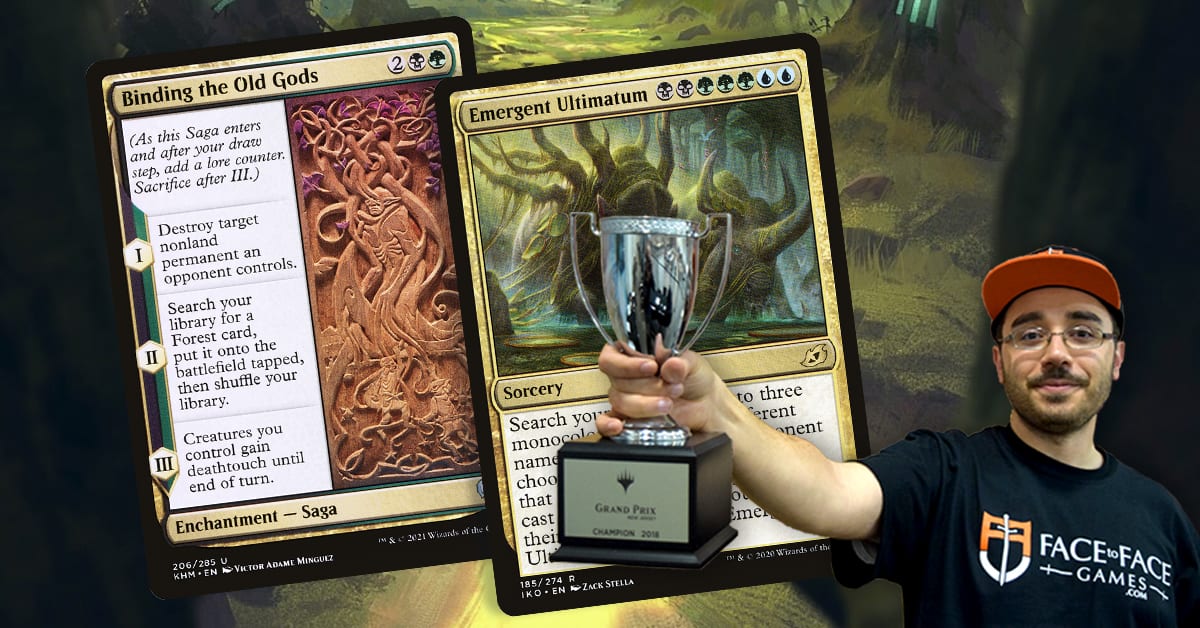 The first list comes as no big shocker. Yorion Sultai lists performed really well at the last split weekend. With a stale format tournament many players will adapt to the old data and play cards that answer the top dog. Cards like Roiling Vortex for instance. What I love about these lists is the addition of Binding of the Old Gods. It forms a double service of answering hate cards, but also ramping us to an Ultimatum. I never expected I would only be playing three copies of Ultimatum but it is nice not having a billion seven drops.

Here’s how I chose to work with the flex spots:

I chose to play a Shark Typhoon in the main deck to increase my options for an Ultimatum. Especially in mirror matches win conditions can become a real issue. I expect to face a good deal of Rogues in this event so I packed a couple Mystical Disputes in the main deck as well. A pair of Elspeth’s Nightmares I’ve come to feel is pretty stock. I didn’t love the second Valki others were running nor the third Alrund’s Epiphany, they both felt somewhat unnecessary and taxing on the curve. I chose the main deck Cling to Dust and sideboard Polukranos, Unchained as more concessions to the Rogues menace.

With the rise of Squirrel decks, I felt Pestilent Haze was a nice sideboard option. I like Saw it Coming in the sideboard since mirror matches get Duress. Hiding the counterspell in exile can be instrumental in long games. I felt 2 Mazemind Tome was already pushing it in the main deck with so many viable aggressive decks. I put the third copy in the sideboard because of its incredible utility in prolonged matchups. I still can’t decide if Vorinclex is just unnecessary but with open deck lists I wanted it just to make the opponents play around it. I recommend if your opponent has Giant Killer mana up to choose a different card with Ultimatum.

I’d say Historic is the more popular format and unlike Standard went through a bit of a shake up recently. When Uro left it took Sultai along with it. Some people are still trying to Sultai but according to the data, they have been rather unsuccessful. Jund Sac was actually the top dog before the banning and surprise surprise. It is still on top of the data sheets.

There’s a lot of variants with Jund Sac. There’s Collected Company lists. Frankly there’s not enough high value targets to make Collected Company’s consistently good. I whiffed quite often or would hit just a Gilded Goose sometimes. There are of course broken hits in double Mayhem Devil, but I don’t think statistically the results from it are worth the cost. It also made sideboarding options a pain in the neck. Trying to keep your Collected Company count of creatures that cost three or less high enough, while still bringing in the cards you wanted was next to impossible. It forced us to play less advantageous sideboard options just because they could be found by a Collected Company.

There’s straight forward Rakdos Sacrifice utilizing Chandra, Torch of Defiance on the top end of the curve. These lists are flexible in their utility for card advantage thanks to being afforded the ability to run cards like Castle Lochthwain. Chandra taking out the opponents Yasharns is always nice as well. Ultimately the issue with Rakdos was that it lacked in speed without Goose, had a worse time at coming back from behind, didn’t make broken turns like you sometimes could with Collected Company, and had worse options for sideboarding without access to green mana.

There are Jund combo variants that try to win with Bolas’s Citadel. Don’t even get me started here. The definition of a glass house.

Then there’s what I feel the best version of Jund Sacrifice is: the food variant. The data that’s coming out pre-Kaldheim Championship is showing that Jund Sac is the top dog as well. Korvold is a powerhouse in so many matchups and especially in Jund Sac mirrors. That being said check out how I built my list with the flex spots:

Most people play 3 Korvolds, but we always wanted to draw it in testing so we put the fourth copy in. The Akroan War was a cool add to the sideboard because we could find it off a Trail of Crumbs and served as a solid answer to an opposing Korvold. The Bolas’s Citadel is tricky because it takes away Jegantha. I recommend only bringing it in for matchups like Orzhov Aura’s where the Jegantha doesn’t do very much and the Citadel is very powerful.

Binding the Old Gods has been a very flexible answer that has added many dimensions to this deck. Again it can be found off of a Trail. It hits Leylines or Korvolds. All three modes are fantastic for the deck. The additional land lets you really abuse Trail of Crumbs. Stage three with a Mayhem Devil out can take out big creatures in one zap. The card is all around great, plus it means more ways to dispense with Yasharn.

The team kept the extra two copies of Trail of Crumbs in the sideboard for those matchups where they’re fantastic, like control or even Rakdos Arcanist. Pretty much anytime they’re not hyper aggressive it’s good to bring these extra copies in. Because of the fear of Neoform and combo decks like it, we felt four Thoughtseize was warranted in the sideboard. I would only bring in all four against Combo or a heavy control deck though.

I know I’ve referenced my team a few times and I cannot stress how powerful of mages I have the fortune of working with: Luis-Scott Vargas, Huey Jensen, Gabriel Nassif, Kai Budde, Shahar Shenhar, Reid Duke, and so many more insanely talented and super cool individuals. By the way this list of names is in no particular order, so don’t go throwing shade about any kind of tier list please.

The majority of our list is pretty much the stock Korvold list. I believe it plays the long game better than other variants. It can still do the early broken stuff even though it’s only slightly less often. It’s incredibly hard to combat this version because almost none of the hate cards effect more than one or two cards in the deck. We have the versatility to answer most things and it feels favored in most matchups. That being said most of my team last minute switched to Abzhan Yorion simply because it puts Jund Sac variants in the ground. By the time you’re reading this we will see if that was smart or not. I put my faith in Jund Sac despite the fact it has a target on itss back. We will see if that was dumb or not, I suppose.

As always, thanks for tuning in. See you hopefully in person this year!