What I’m Playing in the Historic Open 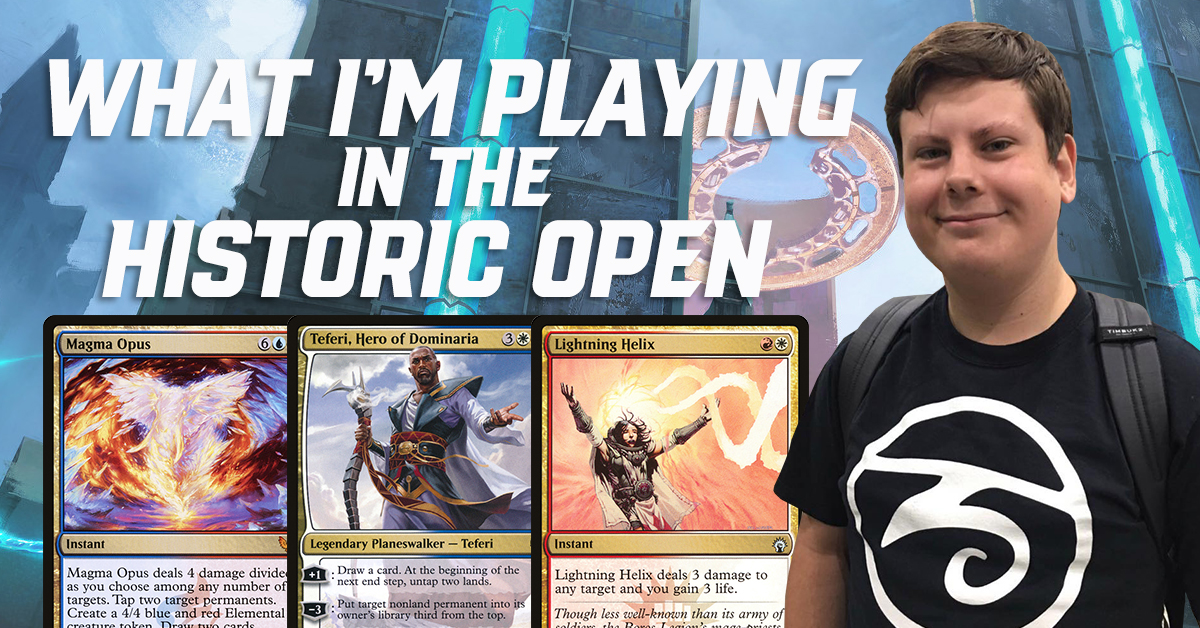 I’ve honestly given Historic little to no thought over the last few months. While I was somewhat preoccupied with making Mythic in Limited with the release of Strixhaven, I turned a blind eye to Historic due to one card’s printing:

Brainstorm proved to be too good to be true in Historic, as it was suspended back in July due to its overwhelming performance in the format and at the Strixhaven League Weekend. Man am I glad to have avoided the format until then. Brainstorm found its way in a number of high-performing decks, but most notably were Izzet Phoenix and Jeskai Control.

With Brainstorm gone out of the format and the addition of Jumpstart: Historic Horizons, Jeskai has evolved, and it’s what I’m digitally sleeving up for this weekend’s Historic Open. I don’t have any exact data on Historic, since there haven’t been any major events since Jumpstart: Historic Horizons’ release, but from my endless Twitter scrolling, I’ve found multiple high Mythic players and Pros commenting on Jeskai’s power level. Is it the best deck in the format? Maybe, maybe not, but as it stands it looks to be doing some broken things while playing a ton of good cards. And do you think I’d turn down the offer to play a control deck in a high stakes event??

My love of control deck aside, Jumpstart Historic Horizons did give us one notable spell that automatically slides into any Blue-based control deck: Archmage’s Charm.

Archmage’s Charm has seen play in similar Izzet and Azorius-based decks in Modern already, a current staple 4x in some of the Azorius Control decks that have taken down MTGO events such as the Modern Challenges. Charm is just such a classic do-it-all. In Historic it can act as both a counterspell, especially in instances where you want to snag a Collected Company. It can pull you ahead on cards when you’re digging for a wrath or some more action. It also has niche cases where its third mode is incredibly useful, such as nabbing a token from Commence the Endgame or a random goblin or Pelt Collector.

Moving on, here’s what I’m playing in the Arena Open:

The real power of the deck comes from a few key pieces: Magma Opus, Torrential Gearhulk, and Mizzix’s Mastery. Mastery was already the bane of my existence in Strixhaven Limited, and it’s no surprise why it’s so powerful in Historic. On the play with Jeskai Control you can discard a Magma Opus for a treasure and cast Mastery on turn three to flashback your Opus. This is incredibly backbreaking for decks that have explosive starts with small creatures, such as Goblins or Burning Tree Emissary decks. You can undo their first few turns, draw cards, and make a 4/4, solidifying yourself in the match on only turn three. If you don’t have a start as busted as that however, you can pull ahead with draw spells like Expressive Iteration and build up to a turn four Teferi, Hero of Dominaria or turn five Torrential Gearhulk to flashback Opus.

In the past week, aside from playing Jeskai mirrors, the majority of my matches have been against variable creature decks such as: Gruul Shamans, Goblins, Gruul Aggro, Elves, Mono Black Aggro, and Selesnya Company. Jeskai’s hardest matchup is most likely creature decks with discard and counterspell backup, such as Rakdos Lurrus and Dimir Rogues.

With that in mind, I want to be most prepared for aggro matchups and the mirror. Let’s go over the sideboard and some of my card choices.

2 Rest in Peace: For the random graveyard combo decks like Dragonstorm, and the Lurrus decks.

1 Devout Decree/ 1 Aether Gust/ 1 Fry: These are the one-of matchup-specific hate cards. You can customize this however you’d like. Tibalt’s Trickery is a deck that’s come up in Best of One matches, so Aether Gust is a bit better there. Devout Decree is more suitable for Mono Black, Izzet Phoenix, and Mono Red. Fry is for the mirror to hit Narset or Teferi.

2 Portable Hole: For the hyper aggressive aggro strategies such as Gruul Shamans, Mono Red/Black. Can also bring in vs Dragon’s Rage Channeler decks.

2 Mystical Dispute/ 2 Dovin’s Veto/ 1 Shark Typhoon/ 1 Commence the Endgame: Your average mirror cards – countermagic and evasive threats that draw cards. One neat thing about Archmage’s Charm is that it can steal big shark or zombie army tokens, so something to watch out for.

2 Settle the Wreckage: While this is an obvious sideboard in vs aggro decks, I especially like Settle over sorcery-speed wraths due to the popularity of Collected Company decks. Be careful of Gruul Spellbreaker though.

While Jeskai is my go-to choice for the Open this weekend, there are a couple things to keep in mind. I’ve talked about this before in some of my previous Open articles, but you are more likely to make Day 2 of the Open playing Best of One than Best of Three. Best of One has three more matches to win, but gives you two more losses, whereas Best of Three gives you only four matches to win, but any loss ends your run. However, this is something that heavily influences the metagame for these two options. Best of Three will most likely have more of these Jeskai decks and decks with more robust sideboard options, whereas Best of One will be populated by more aggressive strategies.

While I’m not a fan of Azorius Control in favor of Jeskai, I do think there’s an argument to be made about playing Azorius in Best of One. Azorius gives you access to a variety of wraths, such as Settle the Wreckage and Day of Judgement. Settle in particular is a great way to combat Collective Company decks that can play around your sorcery-speed wraths. Azorius also gives you access to lands that deal you less damage. In Jeskai you have to play multiple shocklands, while in Azorius you only have to play four. Jeskai does balance this out, however, with four Lightning Helix. One other benefit of Azorius is that if you skew your deck to combat aggro you can also balance out your Jeskai matchup by playing multiple copies of Narset in your maindeck. Narset can combat some of Jeskai’s card draw, but be careful of using her -2 in the face of a potential Lightning Helix.

There’s definitely value in playing Azorius over Jeskai in Best of One, but I think overall having access to a turn three Magma Opus is probably the stronger play. You can also customize your Jeskai deck to be a little more conscious of the aggro matchups in Best of One, focusing on playing an extra Justice Strike or a copy of Settle the Wreckage maindeck. While you can expect to face a variety of matchups over the course of the weekend, Jeskai and aggro decks are the two to keep in mind the most.

While Historic isn’t my format of choice, I’m excited to play a control deck in a high stakes event. Will Mizzix’s Mastery prove to be the format’s top dog? Only time will tell. Best of luck if you’re playing the open! Next week I’ll be switching back to Standard to talk Midnight Hunt spoilers and decklists.