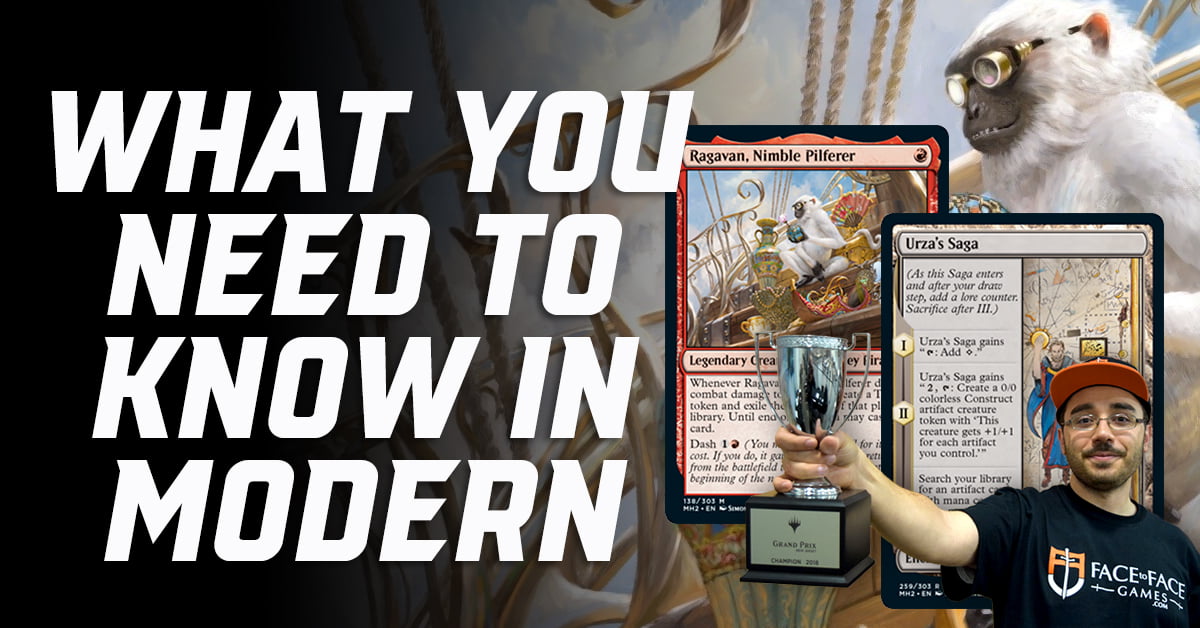 Modern Horizons 2 has sent a shock to the Modern format. The power level of cards is now through the roof. It reminds me a lot of original Modern and everyone trying to Blazing Shoal people out on turn 2. Seems to be more of a turn 3 format, but still feels as busted in the early turns as it ever was.

The biggest two cards’ people are talking about are Ragavan and Urza’s Saga. Although interestingly enough, Urza’s Saga hasn’t made a big enough impact to really be considered Tier 1. Despite many people talking of it being ban worthy. The secret sleeper card seems to be Dragon’s Rage Channeler.

Let’s look at the Modern Challenge winner from July 1st as a representative example of the Izzet builds that have swept the format;

We can actually see quite a few new cards that have manifested the explosion of this archetype. Murktide Regent has filled the gap in what used to be taken up by cards like Tombstalker and Gurmag Angler. This one gets significantly bigger however and doesn’t require a third color (extremely significant on the mana). Unholy Heat provides red with a sorely needed answer to big creatures like Tarmogoyf. Mishra’s Bauble acts as a delirium enabler while also fueling the graveyard for Dragon’s Rage Channeler and Murktide Regent. What we start to see is all these Izzet cards coming together and playing off of each other really well which is something we only sort of had before. With the curve being so much lower and faster, it’s easy to say these decks will be at the top of the format for some time.

Delver decks as they’ve been known in Legacy for some time have been at the top of the format. Now it seems that’s been introduced to Modern as well. So, the time to adapt is here and we are seeing people do so in innovative ways. Delver in Legacy used to have issues overcoming Miracles. This creative player found a way to utilize Modern’s “Swords to Plowshares” Prismatic Ending in conjunction with Chalice of the Void to give these Delverless Delver decks in Modern some real fits. Here’s what that looks like;

This list preys upon the Izzet builds having lots of threats that cost one mana, either by locking them out with Chalice of the Void or by stealing the threats with Archmage Charm in the hopes of picking up instant speed two for ones. The fact that Prismatic Ending gets around your own Chalice of the Void is pretty exciting as well.

Still others are finding additional ways to innovate old decks into something competitive for the new environment. My teammate, Gabriel Nassif, has been a big proponent of the Blue Cascade Living End type of deck for some time. I believe this next list is close to what he has been attempting with the format.

The obvious downside of any cascade deck is the inability to have meaningful interaction in the early stages of the game. The nice aspect of Living End is you want to be spending that time cycling away your threats into the graveyard anyway. The ability to use Grief to pave the way and then to get the recursion of a Thoughtseize effect has been another huge boon to this archetype. Subtlety is of course another big advantage the deck has gained, being able to answer threats and not even worry about recurring them alongside your threats.

This deck has a strong game against a lot of the field but can fall short against threats like Leyline of the Void a little harder than some of the other cascade strategies. Even with the format being as graveyard dense as it’s been, we haven’t seen many people picking up Leyline of the Void. In the meantime, this could be a deck to watch until people start to adapt again.

If you’re throwing a Modern deck together right now, you need to consider that there are very fast threats that need to be answered immediately such as Ragavan as we’ve mentioned. Secondly, many people are playing Cascade combo decks and so you’ll need a plan for that as well. Thirdly, there are a lot of permissive cards in Counterspell, Archmage Charm, and Metallic Rebuke. This has caused a sort of bottleneck at the top of the tiers. What we are seeing is only Izzet Strategies and Cascade decks emerging.

Does this mean Modern is already locked in with two distinctive types of decks being the only Tier S decks? I think there’s still a lot of time for creativity left. Modern Horizons hasn’t been fully explored yet. I believe that Urza’s Saga is powerful enough that we could find a build of Amulet that’s up to the task of taking on the new meta. Ragavan and Counterspell are mighty threats for Amulet to be facing however and currently it’s been falling short. Still there are decks like the Azorious Control brew listed above that attack a small meta with a very fine precision. Chalice of the Void on zero is a great answer to dealing with Cascade effects. It’s certainly a list I’ll be excited to try as I like to diverge with the meta in order to gain a significant advantage in an open field whenever possible.

I’ll leave you all with an Amulet build that went 3-1 in that same challenge for reference;

The adaptation of Grazer over Sakura Tribe Scout is mainly due to the prevalence of Lava Dart in the format. I think it’s a necessary swap, but unfortunately still leaves the deck with some undesirable late game draws. I would certainly want a Chalice of the Void in the sideboard as a tutor target for Tolaria West in order to have a good target to combat the Cascade meta as well. Thanks for reading as always!