Another week and another handful of massive Pioneer bans. They really weren’t kidding when they said they’d be heavy handed with policing the format at the start. 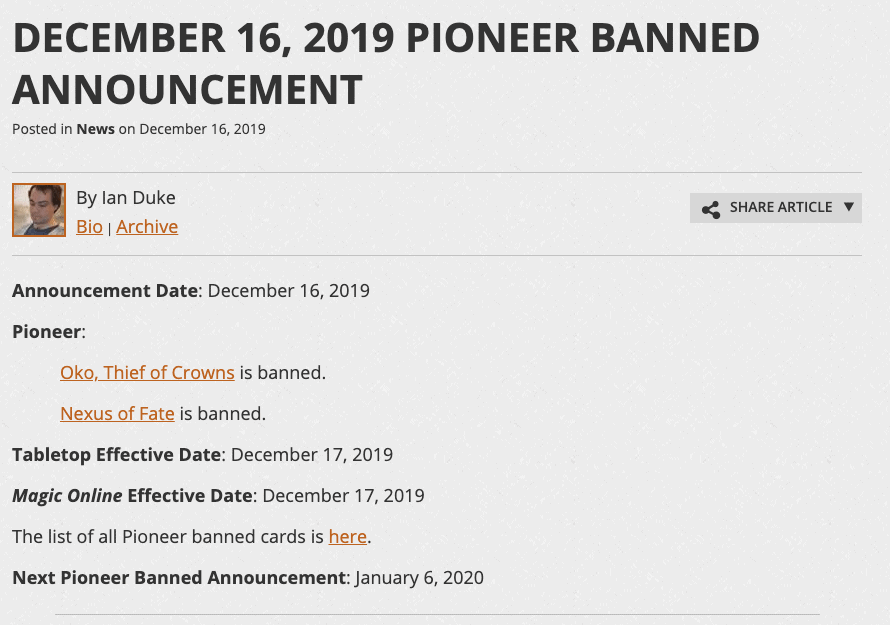 Incase you haven’t heard, both [Card]Nexus of Fate[/Card] and the bane of just about every format right now [Card]Oko, Thief of Crowns[/Card] were banned on Monday. Which means, for what feels like the tenth time in two months, we’ve got a brand new Pioneer format to brew in. Here’s where I’m starting:

The core interactive shell of [Card]Thoughtseize[/Card], [Card]Fatal Push[/Card] and [Card]Abrupt Decay[/Card] is excellent for keeping opposing linear strategies of all kinds in check. The problem has been finding a proactive shell to support them that can keep up with the rest of the format. This briefly existed with the [Card]Field of the Dead[/Card] decks, and now that the format’s power level has moved down a rung or two, [Card]Emrakul, the Promised End[/Card] is primed to serve in that role.

Oko and [Card]Nexus of Fate[/Card] were actually the two hardest to deal with cards for Emrakul as they both are able to invalidate the 13/13 body while being impossible to get rid of during the [Card]Mindslaver[/Card] turn. By comparison, the [Card]Lotus Field[/Card] combo deck that remains in the format will generally fold to an Emrakul cast, either by being forced to combo off and draw their entire deck or simply blowing up their own manabase with a [Card]Lotus Field[/Card]. Similarly, without Oko the green decks are stuck trying to go through Emrakul the hard way with whatever’s leftover after a round of chump attacks and casting X spells for zero.

The key difference between this Delirium build and others is the lack of [Card]Grim Flayer[/Card]. While Flayer is an appealing way to apply pressure early and close games, Emrakul outclasses your opponents’ endgame anyway so pushing damage isn’t that important. Similarly the filtering Flayer offers — while powerful — doesn’t really help when the goal is to hit land-drops for the first eight turns anyway. For that reason I prefer actual  cards like [Card]Tireless Tracker[/Card] or [Card]Courser of Kruphix[/Card] that actually help you accumulate resources. Removing Flayer also frees us up not to care about hitting Delirium early, so we can avoid playing a hodgepodge of mediocre enablers like [Card]Renegade Map[/Card] or [Card]Vessel of Nascency[/Card] and just rely on [Card]Satyr Wayfinder[/Card] and the natural flow of the game to hit Delirium by the time we need it.

Ready access to sideboard cards via [Card]Traverse the Ulvenwald[/Card] is another major payoff for building in a Delirium shell. [Card]Blightbeetle[/Card] and [Card]Massacre Girl[/Card] win games and matchups single-handedly, and we effectively draw them more often than other decks while preserving more sideboard slots for other problems.

Of course, nobody said we had to play fair with our Emrakul deck. In my opinion, running dedicated [Card]Aetherworks Marvel[/Card] fatties beyond Emrakul is a little weak. That said, not reliably hitting something huge before your Marvel was turned into an elk proved too much of a Catch-22 for the deck to get anywhere before the bans. Now without Oko your opponents will have to fade multiple spins, or at least have to spend a real card killing your Marvel, so it’s far easier to convert your energy into an Eldrazi titan over the course of a game. There is still a matter of [Card]Teferi, Time Raveler[/Card] shutting off the Marvel with its passive, but between it being much more fragile to attacks from our three-drops and Teferi decks being slow enough to just hard-cast Emrakul against, that shouldn’t prove nearly as big an issue.

The payoff for casting Emrakul is so high that the second best thing we can be doing off our mid-game Marvel hits is just ramping one out from our hand as quickly as possible. To that end, [Card]Chandra, Torch of Defiance[/Card] and [Card]Ugin, the Ineffable[/Card] are reasonable threats in their own right that also produce two crucial mana toward an almost certainly game-ending threat. They also conveniently produce another card type when they’re killed or milled over.

Ruric Thar is essentially a backup Emrakul in many combo matchups, where putting him into play generally locks your opponent out of the game. Leaning into haymakers here also just makes sense in a Marvel deck since our huge burst of free card selection comes with a side of however much mana we want, so we might as well be playing cards that actually win the game. The same logic extends to stacking up sweepers in the sideboard like [Card]Anger of the Gods[/Card] and [Card]Chandra, Awakened Inferno[/Card] rather than relying on cheap incremental interaction like [Card]Magma Spray[/Card] to catch up against aggressive decks. There’s also real upside to not leaning into more artifacts when our opponent is encouraged to bring in answers to Marvel.

There’s a lot of value in the ability to get aggressive against opponents playing combo or control decks, but it can be hard to realize that advantage in Pioneer because all the green decks are flush with tools to outsize early creatures and shut down the combat step. This shell, which uses [Card]Wayward Servant[/Card] and [Card]Corpse Knight[/Card] to convert kills off [Card]Rally the Ancestors[/Card], sidesteps that problem nicely by seamlessly transitioning into a combo deck as the game goes long. It began showing up in Magic Online leagues a couple weeks ago, and this list is the result of my attempts to refine it.

The first thing to know about this deck is that by far the best card in it is [Card]Cryptbreaker[/Card]. A free draw engine for one mana is obscene and making sure we can leverage it early and often is crucial. To that end we’re playing as many cheap zombies as we can, abandoning the many three mana lords that have appeared in typical zombie decks in Standard and embracing [Card]Foulmire Knight[/Card]. We’ll take extra combat damage when we can get it, but the threat of doing so is generally more important for keeping our opponents honest while we bury them in card advantage.

[Card]Fragmentize[/Card] is a sleeper in this format, and I’d advise adopting it in other white decks. The initial impetus in this shell is to have outs to cards like [Card]Rest in Peace[/Card], [Card]Grafdigger’s Cage[/Card], [Card]Leyline of the Void[/Card] and [Card]Tormod’s Crypt[/Card] that would otherwise cut off access to your combo game plan. In practice more importantly though, it allows you to pick off [Card]Fires of Invention[/Card], [Card]Trail of Crumbs[/Card], [Card]Ensoul Artifact[/Card] and any manner of build-around artifact that people will go for with Oko gone for only a single mana.

[Card]Oketra’s Monument[/Card] is another on the list of artifacts that proved themselves worthy in Standard but has yet to shine in Pioneer at least in part due to the presence in Oko. It also scales nicely into a larger format as we gain access to more pushed white creatures through the years. Although ironically the biggest upgrade comes from within it’s own Standard format with the now unbanned [Card]Reflector Mage[/Card]. Between Mage, [Card]Giant Killer[/Card] to pick off large green threats, [Card]Selfless Spirit[/Card] to dominate combat and [Card]Angel of Invention[/Card] to go over the top, this archetype has all the tools to outclass opposing creature decks at every stage of the game. With Monument itself and a stack of value bodies to back it up we should have plenty of game against anyone trying to go long, and the blue cards do a fair bit of work making sure combo players don’t get the best of us.

One card that does pose a real problem to the deck is [Card]Goblin Chainwhirler[/Card]. [Card]Spell Queller[/Card] can answer it, but not very safely, and so can [Card]Selfless Spirit[/Card] and [Card]Brave the Elements[/Card] as long as there isn’t a [Card]Soul-Scar Mage[/Card] in play, but that’s enough conditionals that more drastic measures may need to be taken if the red decks become popular.

The likely answer is [Card]Lyra Dawnbringer[/Card], although [Card]Nimble Obstructionist[/Card] may prove reasonable and also covers nicely against [Card]Emrakul, the Promised End[/Card] triggers if that’s a concern. Against the [Card]Lotus Field[/Card] deck, the normal plan of [Card]Damping Sphere[/Card] is still quite reasonable. Although here we could also turn towards [Card]Tomik, Distinguished Advokist[/Card] as a low cost maindeck-able hate card if there’s enough meta share being taken up by [Card]Hidden Strings[/Card] and Nissa, Who Shakes the World.

With the banning of Oko, a number of potent build around artifacts and creatures suddenly have a lot more breathing room to shine in the format, including but not limited to [Card]Panharmonicon[/Card], [Card]Feather, the Redeemed[/Card], [Card]Bolas’s Citadel[/Card], [Card]Whip of Erebos[/Card], [Card]Thing in the Ice[/Card], [Card]Tempest Djinn[/Card] or most of Kaladesh block just to get you started. So keep your eye out, because especially with Theros Beyond Death previews incoming, the next broken engine or last missing piece may be waiting just around the corner.