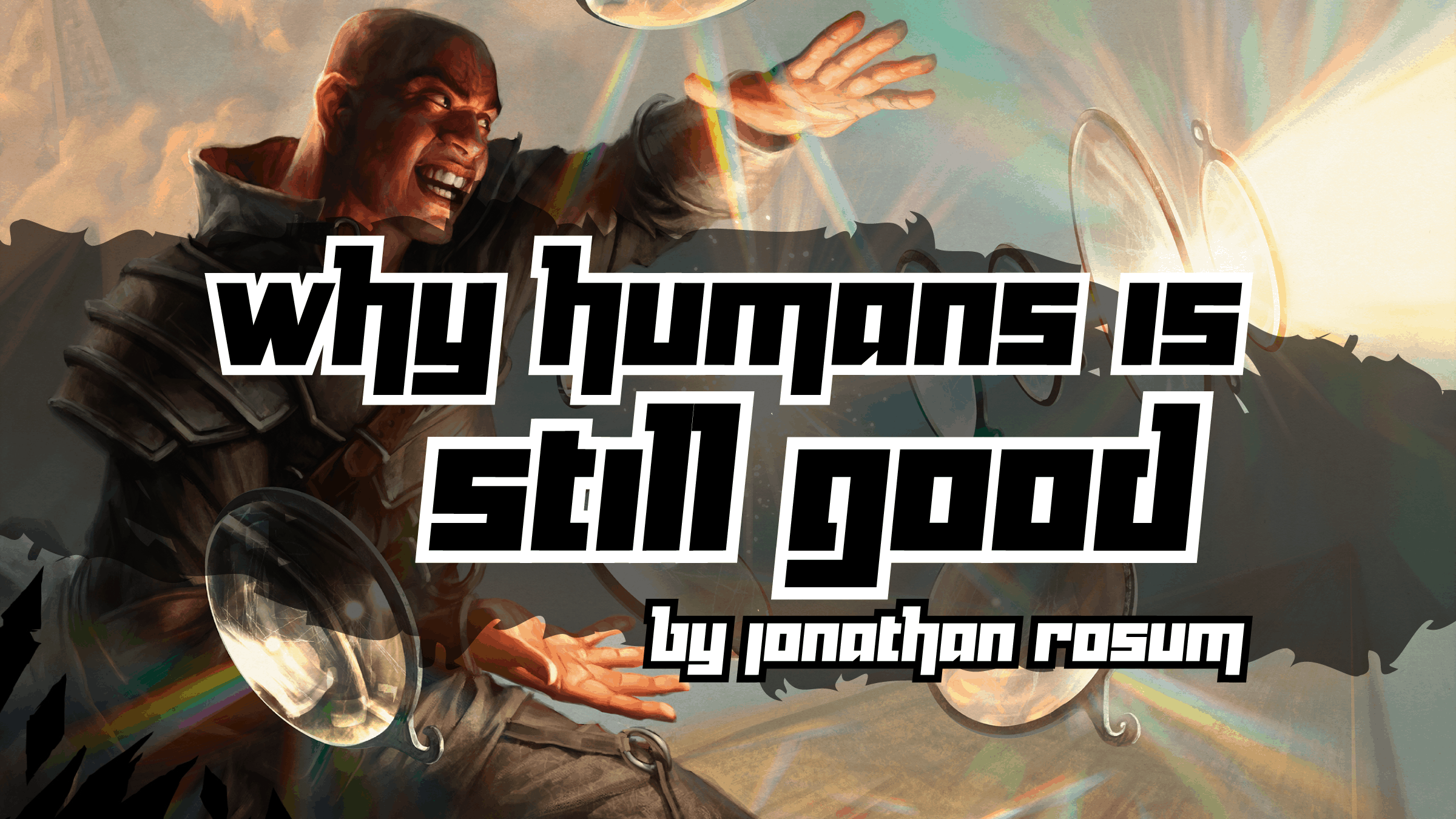 This past weekend I attended the StarCityGames.com Open in Texas. I registered Jund in the main event and sadly missed the cut for Day Two at 6-3. I believe that I played well all day. However, there were some spots in one match where I think I could’ve won if I managed my resources better and potentially have 7-2’d into Day Two. I was bummed about my performance and was skeptical about running the deck back in the Modern Classic. Jund is very powerful, but after getting bodied by Humans I wanted to investigate playing ole faithful.

My Lotus Box teammate Zan Syed had the complete 75 on him and he decided to play the Standard Classic to practice for SCG Cincinnati where we’ll be teammates. This the list I used to Top 8 the Modern Classic at SCGDFW.

I know what you’re all thinking, and I said the exact same thing when I saw Jace, the Mind Sculptor and Bloodbraid Elf get unbanned and that was — “Humans is dead.” That statement is far from the truth, and I honestly think the inclusion of these cards in the format made Humans better. The sad reality is that Jace, the Mind Sculptor decks aren’t very good at attacking the format and are clunky piles. The Jeskai and Grixis decks that are all removal into Jace aren’t well equipped to fight against a majority of the format. The three colour blue control decks don’t have a configuration that’s good against the grindy decks like Jund/Pyromancer while also not being able to fight decks like Ponza and Tron which makes Jeskai/Grixis not a very appealing choices.

The Jund match-up I think got better with the inclusion of Bloodbraid Elf. The Jund decks have been skimping on creature removal spells and relying more on discard. Discard is just fine against Humans, but the deck has a lot of powerful top-decks and is naturally very resilient to cards like Thoughtseize and Inquisition of Kozilek. Bloodbraid Elf also isn’t very good against Human strategies and it makes the Jund deck clunkier than it once was.

Humans has also been known for having a good Storm match-up which is the go-to combo deck of the format on the SCG circuit. It also has game against decks like B/R Hollow One, Ponza, Tron and Eldrazi Tron which makes Humans a very strong contender in the Modern format. Let’s talk about some of the more interesting cards in the deck!

2 Thraben Inspector: This is basically a concession to the grindy match-ups of the format while also serving as an addition one-drop. Humans is a deck looking to curve-out and bury the opponent and having another one-drop that also generates advantage later at an efficient rate is very good. It can also still be a threat that needs to be answered when paired with Thalia’s Lieutenant and Noble Hierarch.

2 Phantasmal Image: I was always a huge fan of having four Phantasmal Image in the main deck of Humans when I won the Team Open in Dallas a few months ago. It was always your best card and allowed you to have some complex two-spell turns. The issue with Phantasmal Image is that it does put a tax on your mana and is weak to opposing discard. Phantasmal Image is a card that you always want to draw when you are at parody, but sacrifices had to be made to make the grindy match-ups better like Jund. I would explore trying to play three copies of this card in Humans while being able to keep the “grind” package of Thraben Inspector and Pia and Kiran Nalaar.

2 Pia and Kiran Nalaar: This card is an absolute house against Jund and Jeskai while also being one of the better top-decks in the late stages of the game. The thopters are very relevant against any creature decks and it will turn the tide of most races. Pia and Kiran Nalaar forces you to have to play Reflecting Pool, which I’ve found to be just better than Seachrome Coast in a majority of situations, while still allowing you to play non-human sideboard options.

2 Gaddock Teeg: Gaddock Teeg is effectively your “I win” card against Tron. If you are able to Meddling Mage Oblivion Stone and have Gaddock Teeg you force your opponent to draw either Dismember or Fatal Push (G/B Tron) or they will die in a few turns. Gaddock Teeg is very good because of how fast your clock is, and the additional turns it buys against Tron and other big mana decks are usually lights out.

2 Dire Fleet Daredevil: This is probably the best sideboard option against Jund/any black midrange deck. It being an automatic two-for-one makes it very appealing against these grindy decks while also being able to use their own spells against them. Flashing back a discard spell or a powerful spell like Kolaghan’s Command is within the realm of possibilities and is key to winning the match-up. I would like to explore an additional copy of this card in the sideboard as it really does put in work.

2 Hostage Taker: This may seem like an over-costed Vithian Renegades, but I think that Renegades is often mediocre. Hostage Taker is a versatile card that not only comes in against Affinity but comes in against Tron, Jund and Lantern as well. The versatility of this card can’t be overstated, and the additional mana requirement is worth the cost.

Make sure you evaluate the board state when thinking of a Meddling Mage name. I recommend scouring through decklists and having a bunch of reps with Humans as blind Meddling Mages will come up a lot and information of all the common archetypes in Modern is very key.

Examples of this include:

Meddling Mage for sure is the trickiest card to use correctly and knowing what to name in the dark can very easily be the difference between a win and a loss.

This is the easiest thing to mess up when playing Humans. I want to go over a few opening hands and what you are looking for in certain scenarios.

Game One, in the dark on the play

What’s your Turn One?

Answer: This is an easy one, you should play Aether Vial and pass the turn as your hand is mana-light. You have a good curve into one-drop, one-drop and the potential of double-spelling your opponent out of the game if you draw lands.

Game One, in the dark on the play

What’s your Turn One?

Answer: Cavern of Souls into Champion of the Parish. Noble Hierarch into Mantis Rider is for sure a good curve, however having multiple Champions makes it infinitely more appealing to just go triple one-drop as your first three spells of the game. This has the potential to completely dumpster your opponent with a turn-four lethal. If the second champion was another two or three-drop, I would lead on Noble Hierarch to give you the option of turn-two Mantis Rider or turn-two Champion into a two-drop.

I could write an entire article about sequencing with the Humans deck. But, the turn-ones are the most important to get right and I just wanted to give all of you a taste of what these hands can look like. I plan on continuing to test Humans in prep for SCG Cincinnati and seeing what the next week brings.