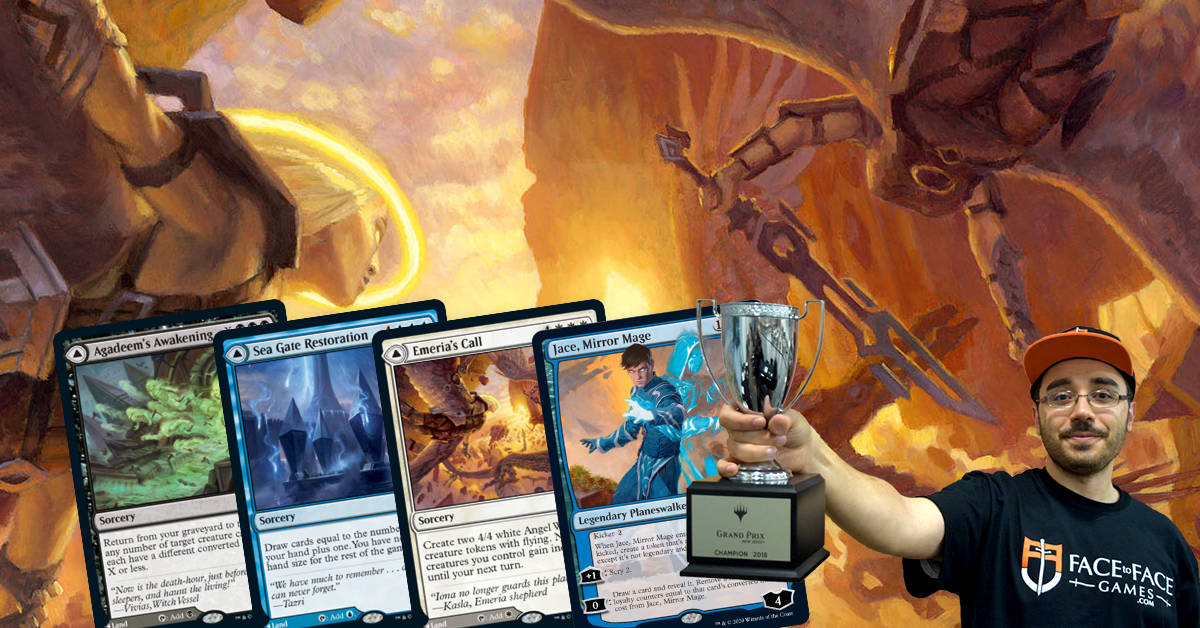 Welcome to my version of cherry picking the spoiler list and sharing random thoughts on Mythic level cards. I do consider myself a pretty solid deck builder and have championed some pretty sweet brews in the past that turned into format leading decks (most recently with Dimir Urza that led to a Star City Games Open victory).

But enough about me, let’s divulge. Tazri, Beacon of Unity screams partnership with Winota, Joiner of Forces. These classic Mardu builds lost some key components like Venerated Loxodon, but can make up for it by slamming haymakers and having a more flexible mana base thanks to Zendikar Rising’s fixing ability. I would look for this to be a premiere contender personally.

Jace, Mirror Mage while on the surface is always exciting, I expect this card to be underwhelming. In a bygone era sure it would have made the cut. We are living in a brave new world of powerful spells however and the control mirror eras seem to have passed us by.

Emeria’s Call on the other hand is so flexible that if we do have a control deck thats successful. It’s more likely to be a midrange deck that utilizes this card very nicely. I expect to see a whole lot of this card at first, then less for awhile as people normalize its role to only a few builds.

Sea Gate Restoration fits a similar role as Emeria’s Call. It being an expensive sorcery that only sets up for future plays is pretty limited, but obviously it being a come into play tapped (CIPT) Island makes it almost never bad to consider.

Agadeem’s Awakening I am kind of excited about. It makes for a Collected Company feel in black, but hinges on there being good early plays for a black style aggressive deck. This is mostly because of the triple black cost.

Shatterskull Smashing is a sweet card that will likely see play in older formats as well. The removal component or land component is the kind of flexibility that some Ponza lists or even Legacy Red Stax decks are looking for.

Turntimber Symbiosis is a dream creation for every Amulet player out there. I’m pretty sure they collectively threw a party amidst a pandemic they were so excited. For Standard it could be another cool support vehicle for finding Winota in a strange world where Lotus Cobra makes mana abundant. I have my doubts but we will certainly see.

Sea Gate Stormcaller is a surprising mythic to me. Snapcaster Mage was set at rare and this card paralells that one in many ways except it seems much worse because the presumption is you will be casting a follow up spell. Oh and it doesn’t have flash so you can’t do sweet things at the best time. So yeah pretty much not a fan unless there’s a way to abuse cheap creatures effectively and yet at the same time somehow spells. Very unlikely to me.

Scourge of the Skyclaves pairs with Agadeem’s Awakening I imagine if we have an aggressive black deck present again. The late game kicker ability is a sweet cherry on top, but with Uro not yet banned (I say this because the internet is wishing it into existence) the downside to this card may come at too great a cost. For the record I do not wish Uro banned and certainly not until we see how the format shakes up first. I am a bigger fan of creating cards to combat problems then to outright ban them unless it’s egregious.

Leyline Tyrant certainly seems like a great card for EDH decks. There exists the potential it could be good in some version of Standard, but I am skeptical again. They have given us some of the pieces to have a big red deck, but it feels like it would simply be trumped by any Ramp deck that seems to be the world as we know it nowadays.

Ancient Greenwarden also feels good for casual formats and I always like the ability to play things out of the graveyard, but without a killer abililty like Hexproof, there’s no way this card gets off the ground without it being good in a Genesis Ultimatum list. I hypothesize it would just be overkill in those decks and not stand on its own well enough however. I could easily be super wrong on this one and have that rubbed in my face down the road. I’m willing to take that chance on this guess though.

Nahiri, Heir of the Ancients seems like it was made to assist in other formats. We don’t really have great equipment to abuse, but maybe there will be a janky Colossus Hammer deck that’s fun to play with. Ultimately I do not see it being a Tier 1 deck however. It’s possible this is a second approach within a Winota list but it feels like it doesn’t line up the way you want those decks to.

Nissa of Shadowed Boughs brings the Landfall mechanic to a planeswalker for the first time. Super cool! It pressures planeswalkers well and potentionally acts as a reanimator effect. I am only uncertain on where it will find its home. We are losing some of the Rock Graveyard manipulation cards from old Standard in this rotation. Are we getting something back that’s truly backbreaking? I suppose we will find out.

Omnath, Locus of Creation is super sweet! It hinges on mana manipulation or a format in which people don’t kill the Lotus Cobra first thing. If you can make it work though and I think people will try (Mostly with Genesis Ultimatum again). I believe we will see great things from decks like this in the early weeks. Until people figure out how to combat these methods of decks, Omnath notable can be hard to kill as a 4/4 creature that dodges Eliminate.

Forsaken Monument is one of the cards I am most excited about as a long-time Artifacts player in Modern. I like to think I had a big influence on the Astrolabe and Mox Opal bans in the format. This card screams to be played in Eldrazi decks. I expect I’ll be tinkering with this card for awhile to find a home. I’m actually very excited about the gain life aspect on this one as eternal formats are littered with Mono Red strategies.

Lithoform Engine seems like a gross card if mana is Abundant, but I can see that getting harder and harder to pull off. The four-mana ability strikes me as the most abusable part, but between this being a legend and already having to have something awesome on the table that’s worth spending eight mana on the first time, I just see this as too much investment and not enough return to being consistently worth its time.

I skipped over Drana, the Last Bloodchief, Moraug, Furty of Akoum and Ashaya, Soul of the Wild. My thoughts on these three are that they were primarily created for limited. I can see Moraug being an EDH card as well I suppose, but they strike me as the most underwhelming Mythics in the set.

I’ll cap it off by saying I am excited that Expeditions are back. If we still had live Grand Prix’s and you could open and play with them in Limited. I for one would be more excited about attending an event like that. There’s no busted Sol Ring, but perhaps you could make the most out of a card like Strip Mine or Ancient Tomb.

As always thanks for stopping by, feel free to argue with me on any of my reads. That’s part of the fun!