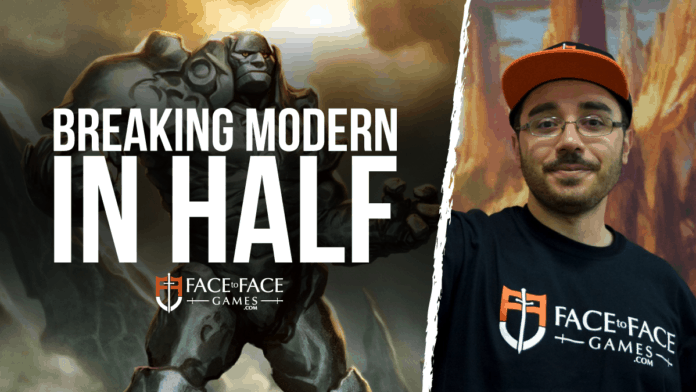 In this article you will get decklists, strategy talk and even a couple pieces of tech that we’ve been working on ahead of the event. With a Modern Magic Fest (MF) win and a Modern MF Top 8 to my name I like to think I have a handle on how to tackle Modern, but at the end of this you can be the judge of that.

My goal is going to be to give you a glimpse at the gauntlet of decks my Team Face to Face Games teammates and my are considering for the upcoming Mythic Championship, and some of the logic for and against each choice.

So let’s jump in:

I’m not going to waste anyone’s time by going too far into a deck you’re all deeply familiar with by now. This is a pretty stock list of what Izzet Pheonix looks like these days, the reason it comes first in my article is because the format has become warped around the existence of this deck. It was 20 per cent or more of the field in multiple large events and currently has the biggest following. The deck has inherent weaknesses to cards like Ensnaring Bridge, Rest in Peace and Fatal Push. The true power of this deck is it’s consistency — trust me, I should know.

Here’s how to beat it:

Zack did particularly well by facing seven Izzet Pheonix during his run in Cleveland and designed his deck in such a way that it took advantage of the matchup. Beware brewers, this deck is weak to Humans, Spirits, Blood Moon and Burn but if it’s all Phoenix all the time then by all means break out your Creeping Tar Pits. This strategy could also be utilized by this next deck:

I think this take on Azorius Control is excellent due to its ability to combat the graveyard-centric nature of the format by being the best maindeck Surgical Extraction deck out there. Even in the case of a mirror match catching an opponents Snapcaster Mage target can be back breaking. Bad matchups in the past like Storm are vastly improved with the addition of Surgical in the main as well. It does however decrease your game against many of the aggro decks in the format.

Modern can be frustrating as someone that’s looking to play “fair” Magic. But, Azorius is one of the rare fair decks in the format that CAN actually answer everything when built correctly.

When you decide to give up on the rock, paper, scissors that usually is Modern. This is where people usually end up.

All that said there’s certainly the feeling that you want to do something powerful in Modern. Your control deck could be built perfectly, but it’s never going to come roaring out of the gates and run your opponent over. With that in mind here’s the deck my team has deemed the most powerful that has many favorable matchups:

The addition of Hive Mind has given this deck yet another path to victory. Funny enough the Amulet Titan shell used to be a Hive Mind deck primarily, but has since gone over to the Titan side. The deck’s greatest weaknesses are to Blood Moon, Damping Sphere and control decks maybe? (It depends on whether you ask Edgar or Nassif)

You’ll want to decide which decks you want to beat and which decks you’ll be taking the loss to based on your estimation of your competition. With this Pro Tour being an open decklist tournament, this deck gets monumentally better in my estimation as you can accurately see the ways in which you’ll be hated on and account for them properly. No more bringing in answers to Blood Moon when they aren’t even playing it.

It’s hard to overstate just how good powerful toolbox decks are, Birthing Pod is banned after all. Amulet is a strong choice for the weekend.

Now if you ask me and you’re reading my article so you must be, here’s what I predict the most played deck in the room will be in London:

Humans has shown itself to be resilient and puts up a great fight against a majority of the format. If you’re looking to have an even spread of close matchups across the board then here’s a good place to start. Be warned, this deck is secretly one of the most difficult decks in the format to pilot. With cards like Meddling Mage to consider every card you may need to name, you better get your reps in and have a good understanding of the format.

Last but not least is another popular deck that many have deemed most-improved thanks to the new London Mulligan:

Here’s the thing, while this deck has gained extra consistency in its ability to establish Tron by turn three, it’s still susceptible to hate. The room is going to be read for Tron. We even see the Azorius Control players playing four Field of Ruins and Surgical Extractions in their maindeck! Be prepared for some grueling tight battles if this is your choice and realize that Thought-Knot Seer and Thragtusk are meant to allow you to play midrange battles post-board, when your big mana will likely be shut off.

Now of course there are too many decks to go into all of them, but I want to list some of the other top contenders for most chosen decks for MC London. Dredge, Hardened Scales, Eldrazi, Bogles, Lantern/Whir Prison and Collected Company decks are all worth considering for this event in my estimation. The fact that the format is so diverse really tells me how healthy it is.

Now obviously if you came here looking for my exact decklist you will leave empty handed, but I think the real takeaway here is that you have so much choice in Modern. Any of the decks I’ve mentioned above are capable of winning this Mythic Championship and almost all of them are customizable enough to adjust to different metagames. So, if you’re looking to break Modern in half you don’t have to go any further than these lists.

If you’re looking for the exact decklists Team Face to Face Games will be registering in London make sure to tune into Face to Face’s Facebook page and Twitter feed on Friday morning prior to Round 4 where they’ll be published for you.