If you’ve played Modern — you’re familiar with this iconic sequence.

This line of play strikes fear into Modern players while they contemplate their mulligan decisions. Legacy and Vintage have Force of Will, Daze and Counterspell to keep unfair decks in check. But in Modern we’ve made due with Thoughtseize, Inquisition of Kozilek and Duress. While these cards are frequently put in decks for a similar purpose — stopping problematic spells from resolving — the play patterns that each generate can vary wildly. A turn one discard spell can wreak havoc on a carefully considered opening hand.

In my previous mulligan articles we focused purely on the strength of a hand at performing a deck’s main gameplan. Now we’ll go a step further and ask the question: how do these hands hold up to disruption? We’ll look at Thoughtseize specifically as it’s the most widely used piece of maindeck disruption and is relatively effective against every deck at least when cast on turn one.

While this won’t approximate disruption in the form of a hay-maker like Rest in Peace versus Dredge or Stony Silence versus Affinity it is the simplest way I could manage to simulate some type of disruption. Those scenarios are complex and hopefully this investigation can provide the data necessary to help extrapolate the effectiveness of the hay-maker sideboard cards.

Luckily for me with the banning of our old pal Hogaak and Neoform being a flop I’ve been able to keep my set of decks and their lists the same as my original articles. While the specific lists have changed, and Wrenn and Six has allowed Jund to usurp Golgari Rock’s place in the meta the lessons will still apply in general. My simulation now goes a step further: after determining the strength of a hand using the appropriate mulligan method I then “cast” a Thoughtseize, removing the card which causes the largest drop in hand strength.

In order to appropriately measure the Vancouver mulligan I allow the player to draw their scry’d card, but assume they haven’t been able to cast any of these cards. Now clearly play/draw can matter a lot and I’m essentially letting the Thoughtseizing player effectively have the best of both worlds, but as my goal here is less about Thoughtseize specifically and more about the effectiveness of disruption in general I believe this is a reasonable approximation.

For example: in a matchup like Amulet where casting an Amulet on turn one before it can get Thoughtseized is a key play pattern this can make a big difference, but if we assume the Thoughtseize could instead be a Nature’s Claim the approximation mostly holds.

For a quick refresher from my previous article, here are the likelihoods for each deck to find a good hand before they go to less than five cards. We see all of the decks improve with the London mulligan and Tron and Amulet get the biggest boosts. This allows those decks to find a playable hand over 95 per cent of the time, despite fairly aggressive mulligan strategies. 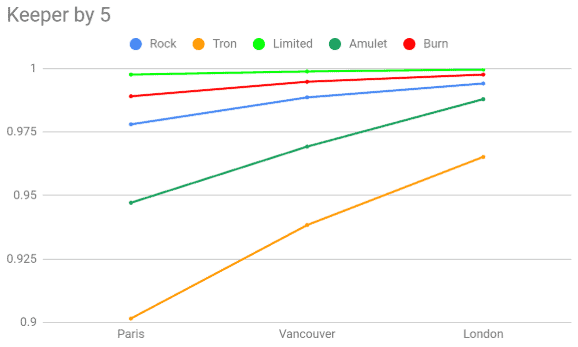 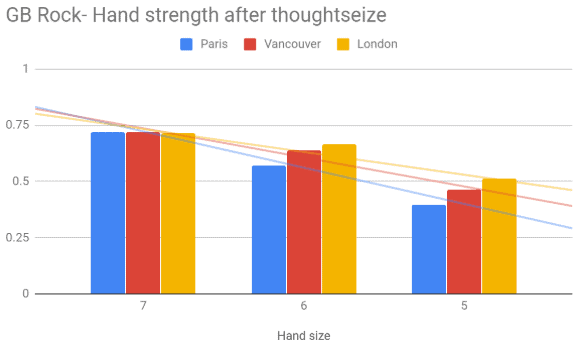 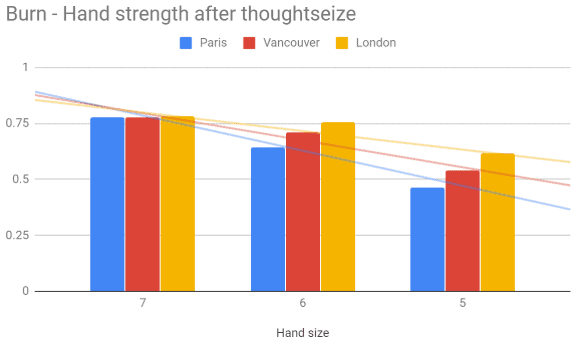 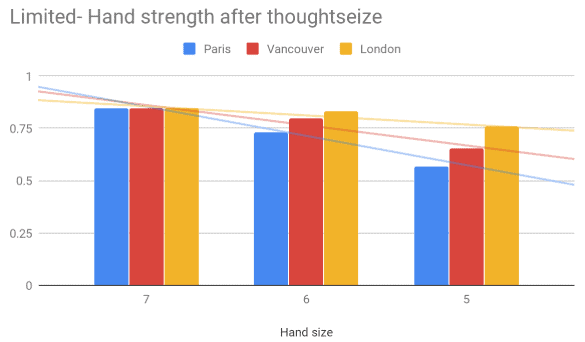 I’ve included these three decks first to show their similar trends. They each have minimal synergy — none of them really rely on a specific card or type of card to operate. They are for the most part just looking for a reasonable curve and the mana to cast their spells. While a Thoughtseize can take an early play the overall quality of each hand remains fairly similar to what it was pre-mulligan. It also shows why you don’t really want many hand disruption effects against any of these decks. In general they get weaker as games go longer, and only having a marginal impact even on turn one makes the risk/reward proposition less enticing.

While a hand disruption spell could potentially take the limited deck’s bomb they will also just completely miss from time to time. My advice is to make sure you have a good reason for adding a Thoughtseize to your limited decks! 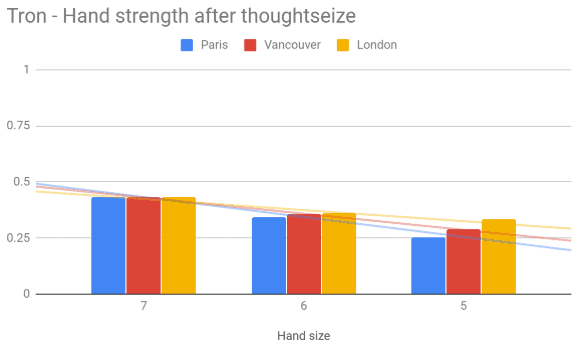 While Tron still sees an improvement in quality with the London mulligan of ~5 per cent, it no longer enjoys the dramatic improvement we saw without any disruption. The nearly flat curve among quality hands — whether you’re on five, six or seven cards — is dramatically reduced. After just a single Thoughtseize the quality of a five or six card hand is nearly equivalent regardless of which mulligan style you’re using. 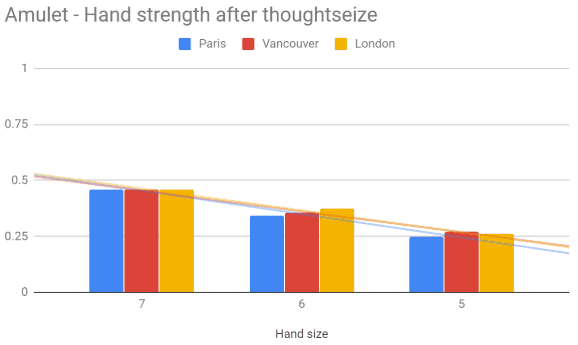 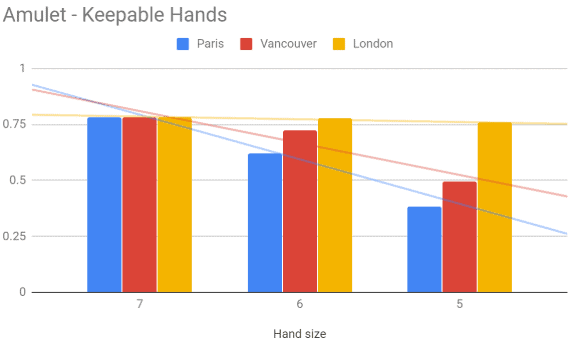 In the case of Amulet all of the gains we saw from the London mulligan quickly evaporate after a single disruption spell. I’ve included the pre-Thoughtseize hand quality chart to compare just how dramatic of a shift we see. At five cards we’re clocking in at a lowly 26 per cent likelihood of a hand being functional. At this number all mulligan styles look like they are within the margin of error of being equivalent. 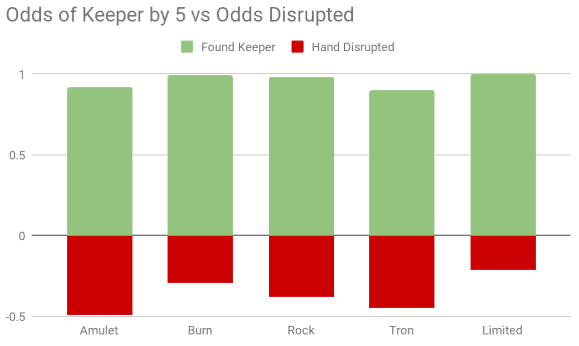 Using the London mulligan we view the likelihood of finding a quality hand before mulliganing past five cards paired with the likelihood that a Thoughtseize will render that kept hand “not quality”. As expected we see our more synergy-centric decks are affected more by losing their best card and we can see just how much of an effect a Thoughtseize can have.

I’d consider this chart a rough guide to how much you should worry about changing your mulligan strategy against a Thoughtseize deck. We frequently hear players discuss this and the data clearly shows why that is the case. Given the mulligan strategy provided for Amulet and Tron they both had over a 96 per cent chance of finding a quality hand before going down past five cards, but a Thoughtseize has a nearly 50 per cent chance of disrupting that hand. Once you’re down to five cards Amulet has a whopping 65 per cent chance of being disrupted while Tron is 55 per cent. With such a high margin of disruption players should certainly be wary of mulliganing too aggressively against a possible Thoughtseize. You’ll need to live off the top of the deck anyway, so you may as well do it with as many resources available as possible. 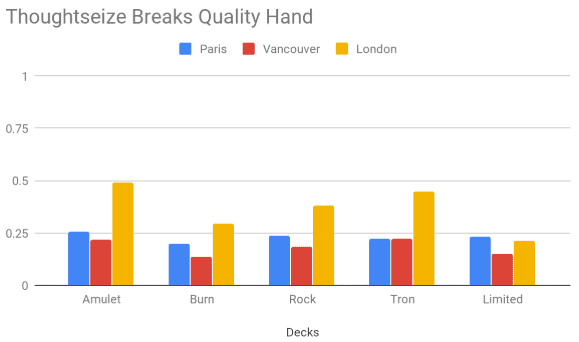 This last chart is a bit weird, but I believe it deserves some discussion. We’re looking at the likelihood that a turn one Thoughtseize will have a significant impact on each deck’s kept hand. The most striking data is seeing the massive spike in Thoughtseize ’s power under the London mulligan system. Now why is this? I’ve defined a very aggressive mulligan style, equivalent to what I might expect under the London mulligan system, therefore I’d expect under the Paris and Vancouver mulligan systems that players are more likely to keep hands that are not “quality”. A hand that gets kept, but didn’t hit the minimum threshold of a “quality hand” is not counted as “breaking” that hand. In simple terms: more card selection gives a higher likelihood of seeing a quality hand which gives hand-disruption like Thoughtseize a higher likelihood of taking a key card.

The second interesting data point is that while the London mulligan improves the quality of Thoughtseize, the Vancouver mulligan appears to dampen its effect. I’m not sure I have a valid hypothesis to why this is, but if I had to guess, it has something to do with improved selection while not removing redundant cards. This could also certainly be a small issue in my algorithm as I didn’t spend any resources determining the optimal card to tuck. I essentially just tuck any card that won’t reduce the hand’s quality, and take the first card generated if multiple cards have no effect. At first I thought this could be because the card could be “hidden” from a Thoughtseize, and while that is a real effect, my algorithm already assumes that card is valid to be taken.

We’ve looked at a variety of decks and how a turn one Thoughtseize impacts them after a mulliganing. In previous articles we saw the London mulligan having an over-sized effect for more synergy focused decks, however in this article we’ve shown that once a single piece of disruption can reduce those deck’s hand quality back to pre-London levels. Even more interestingly, we saw that even after being disrupted the less synergy focused decks continued to have stronger hands with the London mulligan in place. This is very promising, and I believe shows it to be more balanced than we many, my self included, originally thought. What this does show is that having some form of disruption is crucial. While the synergy based decks are better than ever at playing solitaire, they can be kept in check if we build our “fair” decks and plan our mulligan strategies with this in mind. Don’t be afraid to take full use of the new, more forgiving mulligan and find that precious disruption!

With the recent banning Hogaak and unbanning of one of the best midrange cards of all time, I’m pretty excited about Modern for the first time in quite awhile. I look forward to curving Thoughtseize into Stoneforge Mystic in the coming months!