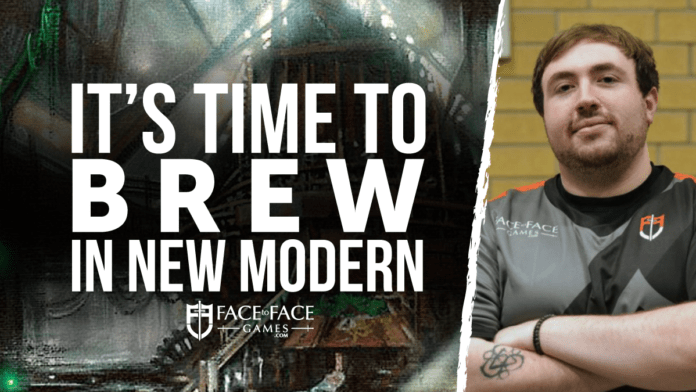 11-4 at SCG DFW with Azorius Stoneblade good for a Top 16 finish. Welcome to Modern Stoneforge Mystic.

My deck was everything I expected with the addition of one of Legacy’s best two-drops and and with a good break here or there, I could have seen myself in Top 8.

It was an interesting event and there was a lot to try to keep with as everyone adapted to the new format.

With the banning of Hogaak, Arisen Necropolis and Faithless Looting, the Modern format is honestly an entirely new beast. Not to mention, the unbanning of Stoneforge Mystic. I really enjoyed the tournament in Dallas because, at least for now, it would appear Modern has become a much more interactive format. You can get run over sometimes, it wouldn’t be Modern without that. But, have a more interactive format at its base allows you to brew a little more and come up with strong plans to help put W’s on the board. And, I like to brew.

It’s with these changes that it becomes extremely important to go back through Modern’s history and check out all the archetypes that have succeeded in the past. Before the format got a little too quick for comfort. It’s easy to forget that Modern is a relatively new format and that means that exploration is always viable — especially when the format’s turned on its head like this. The best deck could be under all of our noses, and I’m going to do my best to find it. This is what makes Magic so fun and creative!

While I think Azorius Stoneblade is a great deck and one that I will definitely be considering moving forward, I’m going to put it in my back pocket for now and work on some Modern brews. And that’s what I’m going to walk you through today: four different Modern brews. You’ll see some blasts from the past with a little new flavour peppered in here and there.

First up, we have a deck that has gained a fair amount of new tools recently. A deck that was somewhat popular in old extended: Aggro Loam.

This deck is a blast from the past and one that is very near and dear to my heart. Shout out to Phil Napoli, an old school Northeast grinder who I Googled for inspiration on this list. Wrenn and Six is absolutely awesome in this deck and with the printing of the cycle lands in Modern Horizons I think this deck could be a real contender again. Countryside Crusher is an option for these archetypes that I haven’t included above but can be quite potent in this style of deck. This is especially true if you’re looking for a quick way to clock your opponents and the format ends up having some spell-based combo decks you’re looking to close the door on.

With Hogaak and Phoenix gone and Dredge at an all time low because of Faithless Looting being banned, graveyard hate has been pushed out of a lot of sideboards. In the absence of graveyard hate the Loam, Wrenn and Seismic Assault engine can absolutely take over midrange mirrors and those are on the rise lately in Modern. You’re also offered the ability to play Ghost Quarter in your maindeck and recurring it with Loam is a real way to punish big mana decks which is something every fair deck in Modern is looking for.

I think this deck has the tools to contend with the current top decks in the format and it is definitely something I want to work on moving forward.

The next deck that I want to work on is another blast from the past, Four Colour Gifts Ungiven.

I think Gifts Ungiven, Unburial Rites, and Iona/Elesh Norn is an underplayed combo in Modern. That being said, Iona is a bit worse now that Karn, the Great Creator is a prominent threat in Modern that can sidestep it.

With this list you have the added power base power level of curving a turn one accelerant into a powerful three-mana planeswalker in Teferi or Liliana. The gifts package is very good in this deck because it not only offers a combo, but also interacts on multiple different axis’. You can assemble Raven’s Crime and Life from the Loam, or search up a Snapcaster pile the ensures you get the answer you need.

Another deck that I am interested in that utilizes the gifts package is a deck that Gerry Thompson used to play a lot back in the day, Azorius Tron.

This deck now has an extra four mana payoff in the form of Karn, the Great Creator which makes your two-mana rocks like Azorius Signet way better. I think there is something here and I’ve had moderate success with this deck online. It may just be weaker than regular Tron on power level, but it is multi-faceted and is hard to hate on unlike traditional green Tron decks. Having to board in hate for the graveyard and for Tron is rough on the opponent.

Finally, we have a Azorius Urza Blade brew that I have been thinking about and working on. This deck is a bit different than the rest of the decklists that I have seen, but will look similar to the Urza decks you’ve seen winning Modern tournaments for the last month or so.

This version is less reliant on artifacts and has no copies of Mox Opal, but instead is playing more blue cards to lean hard on Force of Negation. I’m unsure if this is the correct route to go, but I think this deck could be quite powerful in a metagame where Force of Negation shines. Being able to protect Urza, Highlord Artificer is incredibly powerful and often you can hard-cast the Force once it’s in play.

The fact is, Opal is harder to turn on in the popular Urza lists than almost any other Opal deck out there. With an emphasis on basic lands and snow mana, it’s hard to play enough cheap artifacts to power it up without Darksteel Citadel. This version offers a more interactive slant to the deck that allows you to gradually approach your combo with protection rather than power it out as soon as possible. It also utilizes Stoneforge better than almost any deck as both a combo enabler in conjunction with Sword of the Meek and a secondary way to win the game.

I think we’re at a time in Modern where it’s correct to be brewing, this is basically a brand new format that is relatively unexplored because the interaction level has taken a dramatic shift. I’m looking forward to my next Modern tournament and if all else fails, I’ll have the blade waiting.