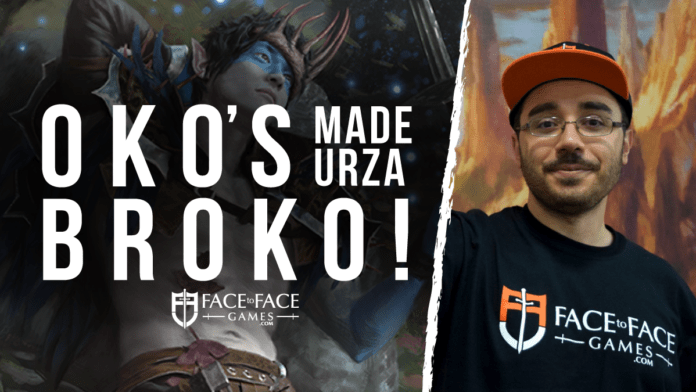 Greetings loyal readers, Throne of Eldraine has offered Urza some new toys. And I’m here to bring you my hottest takes.

What I am offering up on a platter today is the deck I played at SCG Philly in the Modern seat of course. It’s an Urza Thopter Sword variant utilizing the Sultai colours, my newest take on the deck I’ve been iterating since Modern Horizons dropped. My goal with this build was to best utilize the sideboard options within black and green to make this mostly mono-blue shell function at it’s best.

Before I get into that build though, I do want to talk a little bit about Paradoxical Outcome (PO) and Jeskai Ascendancy. PO Urza has been very popular on Twitter and across Modern the past few weeks. It’s an artifact-based combo deck that isn’t soft to Stony Silence. Who wouldn’t be excited about that? I know I certainly was and maybe even still am. What I found in testing the deck was that it was a little more combo-focused and a lot less grindy than the traditional Thopter Sword versions that I am used to. I fully recognize this may be my own personal biases, but the deck felt less powerful in a broad sense, despite being able to kill extremely quickly and consistently.

Of course PO is a touch more resilient to hate with the namesake card draw spell, Sai and Saheeli. But, I often ask myself about the statistical significance of a threat or the inherent fail-rate that a deck contains. My conclusions were as such: PO has a slightly (only slightly) higher internal fail-rate than traditional Thopter Sword just because it’s simply a more linear strategy. Even after that conclusion I also found that it’s kill turn was about a half a turn behind traditional Thopter Sword combo’s best draws. I am sure it’s debatable and others will have reached their own conclusions, but those were my findings and why I switched back.

Emry, Lurker of the Loch is so powerful it gets its own paragraph. It has birthed a whole new dimension with which Urza can be utilized. That said, I feel like it’s a little out of place in the traditional Urza shell.

Let me give you a few examples to help me explain: Have you ever thought about playing Sneak and Show in legacy but adding Noble Hierarch to the deck? How about Ad Nauseum in Modern and playing Birds of Paradise? You probably have already guessed where I am going with this. A deck that doesn’t give the opponent an outlet for their removal spells suddenly doing so is likely a mistake. And this is just too glaring of a weakness for me to ignore.

In a tournament I want to rely on the strengths of my deck and overall perform my best against the entire field. To do that I have determined Emry is a no go. The interesting part is that it is an excellent card to sideboard in after the removal is taken out of their deck, but the bad part is many decks are bringing in graveyard hate cards anyway and those shut down Emry as well. Which means I like to sideboard the card in my PO lists because you do not utilize the graveyard much, but I  don’t think I want it in my 75 if you’re playing Thopter Sword.

The only actual card from Throne to make it into my list has been Oko, Thief of Crowns. This planeswalker has nicely taken the place of Tezzeret, Agent of Bolas. Even though Tezzeret has a higher power level, Oko fits much nicer into our curve. On top of that Oko has the additional bonus of neutering Plague Engineer and Collector Ouphe.

Oko is truly a card unlike any other we’ve seen before in Magic. There’s a lot of talk about three mana planeswalkers and how powerful they can be, and Oko is no exception. This is particularly true in eternal formats like Modern where his transformational ability offers a massive amount of versatility. The reality is that the many Modern games are dominated by the effect of one game warping permanent, take Urza for example. Now with Oko, a deck like Urza, that both wants to react and includes a combo kill, can play a proactive answer to many problem permanents. It’s just such a powerful effect.

What I think everyone asks me for the most is sideboard notes. I stream on Tuesday, Thursday and Sunday nights on Twitch.Tv/EliKassis. When I do, often I promote subscribing to my stream with the fact that I send out new Urza lists with sideboard notes via email to all my subscribers about twice a week. As a bonus for reading my article today I have included those notes below. This is how I traditionally will sideboard in a standardized matchups. There are always people who will adjust a stock list and I would advise you to learn how to adapt to those changes accordingly when you are sideboarding as well.

I know there are plenty of other matchups, but I try to highlight the most popular ones. Modern is way too diverse a format to include them all. It’s also good skill building for anyone to develop how to sideboard for certain matchups. Urza is not an easy deck to pilot correctly. If you don’t have the time to test it thoroughly. Go to my Twitch page and watch some of my uploaded videos from past streams. I went 5-0 with this decklist twice in the first week of October alone, so there’s good content there to show you the way.

Thank you for coming to one of the best Magic shops around and taking the time to read my article. Feel free to say hi anytime at a tournament if you see me and good luck spell-slinging!