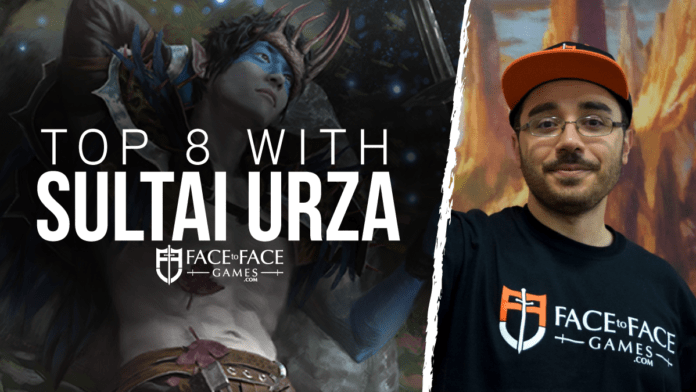 I’m back, and fresh off an SCG Open Top 8 with Sultai Urza!

It turns out, I was right — Oko is broko.

I’m here to bring you more data to help you win your next Modern event based on my success this past weekend. The most common question people ask me after a good performance is obvious: “what would you change?” This article is aimed at answering just that. Let’s start with a mini-tournament report however. Here’s the what I played:

Round 1: Vs Nicholas Devine on Izzet As Foretold – This was a swift 2-0 victory on the back of a double turn four combo.

Round 2: Vs Allison Warfield on 4C Whirza – 2-1. This was piloted by Ally masterfully I might add. Essentially I was able to combo in G3 on turn five of turns and she did the very honourable thing and scooped knowing I did not have an instant win button.

Round 3: Vs Matt Lettieri on Burn – 0-2. This loss was so one-sided I was rethinking my sideboard strategy for the matchup.

Round 4: Vs Joe Jancuk Azorius Control – 2-1. They had a great sideboard strategy that included lots of Stony Silence and lots of counters. Luckily I won game one with the combo and game three was all thanks to Oko beatdown.

Round 5: Vs Brandon Cook on Scapeshift – 2-0. I believe I assembled the combo by turn four twice and they stumbled a bit.

Round 6: vs Christophy Mahaffey on Eldrazi Tron – 2-0. Thanks to quickly assembling the combo and correctly playing around Karn, the Great Creator.

Round 7: Vs Jon Rosum on Sultai Urza Control – 2-1. Memory is a little foggy, but I was fortunate enough to win this somewhat mirror.

Round 9: Vs Jacob Ballington on Sultai Urza Control – 2-1. I combo killed in game one and games two and three were essentially determined by Oko. These Oko mirrors are pretty popular if you hadn’t noticed.

Round 10: Vs Austin Collins on Amulet – 2-0. I combo killed on turn three one game and through a Force of Vigor by turn five the next game.

Round 11: vs Jeremy Bertarioni on Sultai Whirza Control – 1-2. We had three very tight games that came down to a few draws that could have gone either way. Jeremy is very skilled and also entertaining to play against.

Round 12: vs Drake Sasser on Harlan Firer’s 4C Whirza deck – 1-1-1. We had three sweet games again, Oko got me one win for sure. He was able to out combo me on another. The third game could have gone either way as Oko and Thopter Foundry were on Needle lockdown, he had a slight creature advantage but I was the only one with an Urza in play.

Round 13: vs Jackson Baum – Sultai Control again, but I can’t for the life of me remember what happened in this match. I did win it 2-1.

Round 14: vs Abe Corrigan on Sultai Whirza Control – I got this one 2-1 again. The matchup was feeling pretty good at this point, but the games continued to be really close and definitely play dependent. Abe played very well, but I was fortunate enough to run a little better.

Quarterfinals: vs Collins Mullen on Sultai Whirza Control again – I won the first game by assembling the combo in a timely fashion. Games two and three I kept two land hands with decent interaction, but I proceeded to draw lots of air while Collins was able to Oko me into oblivion.

On a much more interesting note, here’s some changes I would consider making to the deck.

You’ll notice the changes are minor and almost imperceptible. The deck performed really well against the field so I don’t want to mess with that too much. That said, in Modern you’ve got to change your sideboard between every single tournament. The format just moves that fast.

The singleton Mystic Sanctuary makes me feel safer adding the additional land because some utility can be gained from it. It doesn’t do much in game one except to recur a Whir, but post-board recurring an Abrupt Decay or Veil of Summer can be a game-breaking play.

As for the sideboard changes, these are based on how I perceive our new metagame will shape up. Let me go through each decision card by card. The Nihil Spellbomb, with one main already you may be curious why there is a second copy. With people playing Drown in the Loch it’s actually a sweet answer there, but mostly I play this one additional copy because it makes the Dredge matchups a lot easier. Particularly this new Vengevine deck that’s been popping up. You draw it more consistently, but also so that after you’ve used one you still have the option to Whir for another. This card is actually pretty good against the Sultai Urza Control decks due to Emry, Mystic Sanctuary and Drown in the Loch.

The Additional Damping Sphere is for similar reasons as the Spellbomb. You want a little more consistency in drawing it for the Tron and Amulet matchups, but it’s good to have one after the first is dealt with. Particularly against Amulet because those games can grind. This card also comes in versus Storm, Paradoxical Outcome and a couple other random matchups.

Abrupt decay was hilarious all tournament because my opponents kept picking up their deck and searching for a land like I’d cast Assassin’s Trophy. I almost wanted a third Abrupt because of the power of Oko, but ultimately, I think the deck can only ever support bringing in two anyway. The other reason to have this card is it’s the absolute best answer to Stony Silence, which hurts Whirza more than other versions of Urza.

Assassin’s Trophy, this card is a two-of that I am never excited to play. Giving the opponent a two-for-one is never fun. However sometimes you just need to kill a Karn, The Great Creator. I think this card is a necessity and the two-count seems ideal. You can also kill Urza lands of course which can be useful.

Battle at the Bridge is a mediocre card but honestly, I’ve played a lot of Collective Brutality and just hated it. Battle can single handedly change the course of the game against Burn. It’s also nice to diversify the creature hate package in the sideboard because of Meddling Mage. Ultimately Fatal Push is better though and that’s why the 3/1 split is the way it is.

Nature’s Claim is usually a singleton or a two-of in my mind. It’s a nice card to bring in against Burn for obvious reasons. Countering burn spells by targeting your indestructible land to gain four life is fun. Killing Eidolon is of course important. Mostly though this card is to ensure we don’t lose to opposing Thopter Foundrys or Stony Silences. I could definitely see going back down to one copy, but I would want to fit in another Burn answer somewhere in the sideboard in order to do that. With how it’s configured now, Claim is pretty flexible as an answer.

Veil of Summer way over performed all weekend. I definitely wanted a second copy, but I don’t think you can play more than two. It is situational and people will start playing around it effectively. The  two-for-one and cheap cost was brutal to my opponents all weekend. I countered a Stain the Mind, many Thoughtseizes and Cryptic Commands. It felt really good and I am confident on this one.

Drown in the Loch is the last new addition. It does a little bit of everything that I am looking for. I am starting with one copy, but I could see myself going up to a second copy here at some point. I think this card is peripherally good versus Burn even and it fills the vacuum against decks where we have a lot of cards that should get boarded out.

To stay up to date on all the latest changes and updates be sure to tune in to my stream! Tuesday, Thursday and Sunday nights around 8:30pm EST and until almost Midnight (sometimes later). Twitch.tv/EliKassis is the link and if you like what you’re watching be sure to give me a follow. For all Subs you’ll regularly receive emails of my new decklists and sideboard guides.

A little something for everyone, thanks for reading guys!