A Guide to Dominaria United Draft 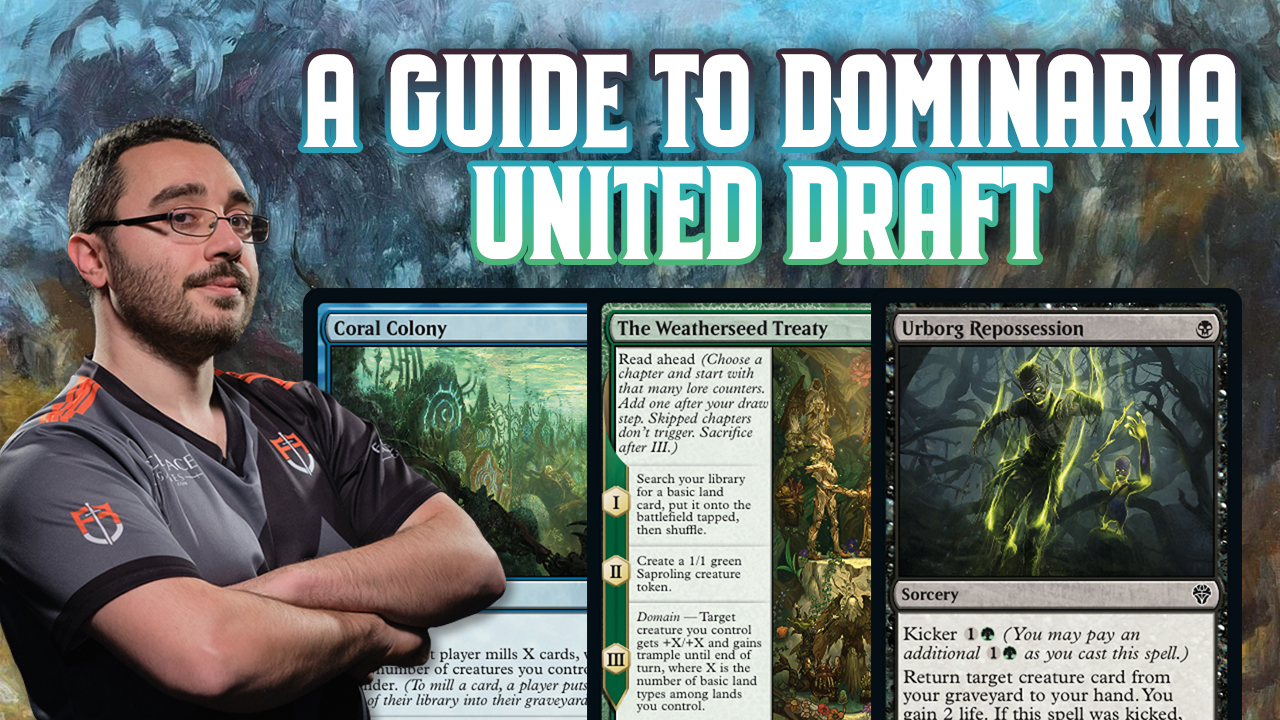 Once upon a time, Limited was “the” format to play. While Limited has been absent the last couple years of competitive play, it’s finally returning with Worlds and the first Pro Tour of 2023. I’m stoked to see the best in the world battle out some draft decks. While times have changed, Limited has remained one of the Premier cores of professional Magic and in my opinion one of the best ways to level up your game.

Dominaria United is actually pretty fun set to draft. Any time you can maneuver a 5-color pile it usually bumps up the funness of a given format. If you draft on MTGO there’s also a lot of monetary value to be opened in this set. Sheoldred is a whopping 50 Tickets! Leyline Binding is another goody to be opened, and it’s only a rare.

The point of the article however, is to get you ready to draft. Let’s jump in from the beginning – obviously we have the five colors of Magic and they are not created equally. Blue has been empirically the strongest by a fair margin throughout the history of Magic…. and it honestly still is. At common you have Shore Up, Timely Interference, Essence Scatter, Impulse, Phyrexian Espionage, and best of all Tolarian Geyser for combat tricks/removal. All of these go great with Tolarian Terror (another common), which if you get multiples becomes like a limited combo deck. Talas lookout, almost on the power level or Organ Horder, is also at common.

Blue also has busted uncommons and rares to select. Battlewing Mystic is fantastic in the aggressive Izzet shells.  Coral Colony is a defender deck powerhouse (yeah this is a thing in Dominaria United Limited). Rona’s Vortex is just a busted removal spell. Aether Channeler is a better Phyrexian Rager. Haughty Djinn is hard to answer, and giving spells a reduction in cost is extremely effective in the Tolarian Terror draft decks. Vodalian Mindsinger is a Limited “Control Magic” effect, ’nuff said. Micromancer actually tutors up multiple removal spells and cantrips.

Vesuvan Duplimancy can be built around and be nutty with cheap Blue one-mana spells. Sphinx of Clear Skies is one of the best cards in the set. Silver Scrutiny is much better than it appears, giving you flexibility at different points in the game. Defiler of Dreams can be paired nicely with cards like Pixie Illusionist for cheap cantrips.

Blue cards that are traps:

If I had to choose a second favorite color for this set it would have to be Black. Also not coincidentally I have identified Dimir as my pick as the strongest color pair. At common level we get Urborg Repossession, Tribute to Urborg, Extinguish the Light, and Shadow Prophecy for removal and draw. When we open it up to uncommons and rares/mythics we get; Cult Conscript, Cut Down, Evolved Sleeper in the one-drop pile. In the two-drops we have Knight of Dusks Shadow, Blight Pile (pairs nicely with Coral Colony), Pilfer, Stronghold Arena, and The Raven Man. In the three-drops we have Braids, Arisen Nightmare, Braids’ Frightful Return, Choking Miasma, Liliana of the Veil. Then in the four-drops there’s Drag to the Bottom, Defiler of Flesh, Sheoldred the Apocalypse, and then in the five-drops the Cruelty of Gix.

Black cards that are traps:

The middle color for me, is Red. Flowstone Infusion, Lightning Strike, and Smash to Dust are the good commons. Smash is better as a sideboard option but flexible enough to go anywhere with all the walls and token strategies in the format. When we branch into uncommons and more rare cards Red starts to get really broken. Electrostatic Infantry, Fires of Victory, Radha’s Firebrand, Sprouting Goblin, Hurloon Battle Hymn, Keldon Flamesage, Squee Dubious Monarch, Jaya Fiery Negotiator, The Elder Dragon War, Temporal Firestorm, and Shivan Devastator are all slam dunk first picks.

Red cards that are traps:

White comes in fourth, but it is pretty close with Green. Benalish Sleeper, Take up the Shield, Argivian Cavalier, Destroy Evil, and Citizen’s Arrest are our good commons. We can already see that it is more sparce in White and we need to tap into the more rare cards for White to be good. Cards that are more rare that are great are; Leyline Binding, Defiler of Faith, Danitha Benalia’s Hope, Wingmantle Chaplain, Serra Paragon, Prayer of Binding, Archangel of Wrath, Annointed Peacekeeper, Valiant Veteran, Phyrexian Missionary, Knight of Dawn’s Light, Guardian of New Benalia, and Runic Shot. We can see White fills up the good cards catagory if we can manage to get the hard to get cards.

White cards that are traps:

Interesting there’s really only one terrible White card. One benefit to White in this set is that it’s a flexible color. You can draft tokens strategies (usually Orzhov), aggressive strategies (Boros), and tempo/flyer decks (Azorius). While White isn’t the overall best color, it’s a good support color for multiple types of decks.

Finally we have Green. Green has Bite Down, Sunbathing Rootwalla, Gaea’s Might, and Vineshaper Prodigy as its good commons. If we include the more rare cards. We pickup Tail Swipe, Llanowar Loamspeaker, Nishoba Brawler, Quirion Beastcaller, Tear Asunder, Urborg Llurgoyf, Yavimaya Iconoclast, Llanowar Greenwidow, The Weatherseed Treaty, Defiler of Vigor, Silverback Elder, Territorial Maro, Herd Migration, and Mossbeard Ancient. Green has some good cards for fixing the five-color domain decks, but I’d steer clear of a bulk of the commons and uncommons it has to offer.

Now that we’ve gone over the picks let’s try to understand what we should be gunning for when we draft. Two-color decks are quite uncommon to win with. However it is typically best to focus on two colors and splash solid support cards or kicker cards. Five-color decks are certainly possible and they usually require having a minimum of six dual lands. You also don’t want to have more than nine of these duals since you want to mitigate how many of your lands come into play tapped. Six puts you in an uncomfortable circumstance to consistently have all five colors but you can support it with cards like Pixie Illusionist, Meteorite, Salvaged Manaworker, Relic of Legends, and a variety of Green fixers.

Colorless cards that are traps:

Blue pairs quite well with all four supporting colors. Izzet wants to be a Tolarian Terror spells deck. Dimir wants to be a value control build. Simic wants to be tempo-based and ramp. Azorious wants to be tempo go wide/flyers. From there Black pairs well with White and Green. Golgari wants to be removal + big creatures and graveyard recursion. Orzhov wants to be cheap tempo, removal, and some go-wide strategies. The last color combo I want to mention is Selesnya, which can be good with the right cards, but would not be a place any pro wants to be unless they had a plethora of ridiculous rares and gold cards to support this archetype.

As usually is the case you want 23 spells and 17 lands most of the time. Sideboarding can be quite important with cards like Smash to Dust being so destructive for tokens and defender decks. Having 3 1-mana spells, 5-7 2-drop cards, 6-7 3-drops, and about 6-7 cards that are 4 mana + is ideal. The mana base is where you should focus to make sure your multi-colored decks are feasible. For your base color you want 8-sources that produce that color. For the backup color usually you want 6-7. Then for 1-3 copies of cards in a splash color you want 2-4 copies of sources that add those colors (must have symmetry). If you follow this arithmetic you should be okay more often than not, but you’re never immune to the shuffler.

Don’t forget there is also legendary creature in every pack. This can inform your decisions on what is missing from the pack or what you might be able to open and capitalize on. Stay frosty in pack 1 without committing. Taking the best cards. Then take stock of what your deck can turn into. Then really go for the gusto and rapid commit starting pack 2 and you’ll have the best deck you could hope for most of the time.

That’s all for now, have fun jamming what I think is one of Magic’s most fun Limited formats in recent memory!