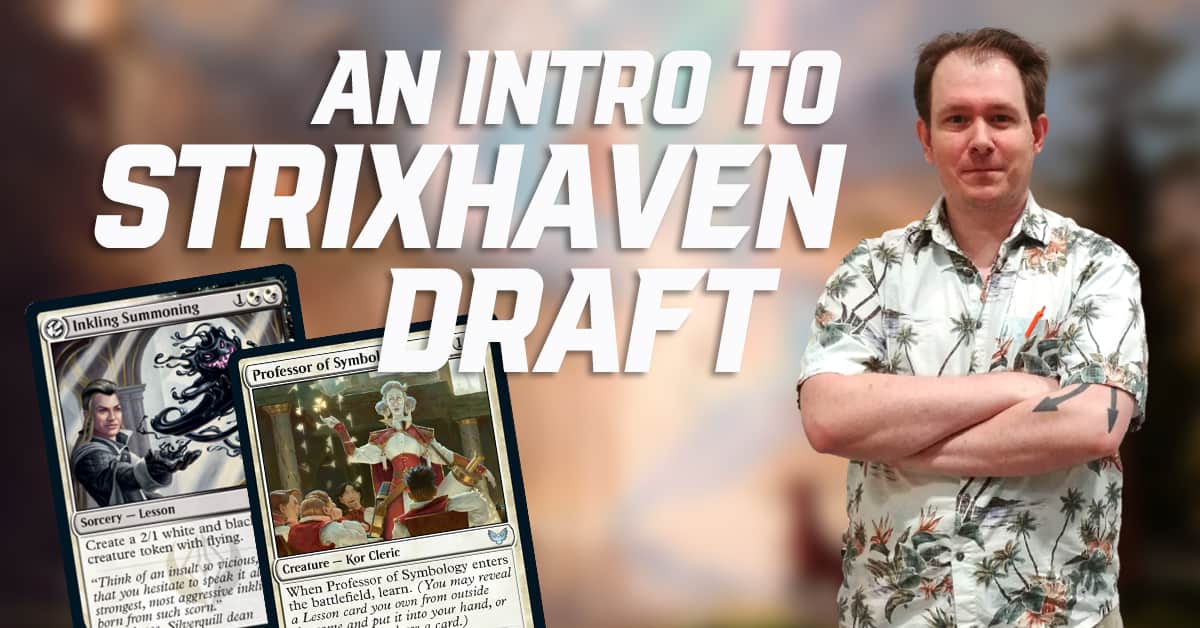 Hello and welcome to Intro Strixhaven Draft! Limited Magic is my favourite way to play the game. In this series we’re going to get you ready for your first Strixhaven Draft. Today we’re going to do a format overview. In future articles we’ll look at each of the Magic Colleges and dive deep on how to draft each one.

Grab your quill and parchment, we’ve got a lot to cover! From the Magic Colleges, the Mystical Archive, the power level of the cards, mana fixing, and the new Lesson and Learn mechanics, there is a lot going on in Strixhaven.

Let’s start off with the colleges. Strixhaven drafts will be similar to various Ravnica set drafts, because of the presence of 5 Mage Colgeges. Each college is comprised of an enimy colour pair.

In a normal Limited set, say for example Zendikar Rising, you have 10 colour pairs that you can draft. In this set, much like Ravnica sets in the past, you are going to want to focus on drafting only these 5 colour pairs. Red Black, for example, is not something you can draft in this set.

Why not? Good question! This set has far more multicoloured or gold cards than a normal set. Kaldheim had 39 for example, and Strixhaven has 90. These gold cards will only appear in the color pairs of the Magic Colleges, so if you’re trying to draft Red Black, you’re going to miss out on all of the good multicolour cards.

This has a few implications in drafting. One of the best strategies when drafting, is to try to “stay open.” This means trying to pick a card that can be played in as many decks as possible, before you commit to a colour pair or strategy. Many players would pass on a powerful gold uncommon like Quandrix Cultivator for a monocoloured removal spell like Expel pack one pick one.

This is not the right approach for Strixhaven. Single colour cards aren’t actually keeping you as open as you might think. That Expel is only going to go into a Red White or Black White deck. Other than colourless cards the cards that keep you most open in a draft format like this are Hybrid Mana cards, such as Silverquill Pledgemage. Silverquill Pledgemage is at its best in BW, but is also playable in GB, and WR.

Each pack of Strixhaven will have a Mystical Archive Slot, so you will always open one. These cards are alternate art versions of some powerful (and not so powerful) spells from Magic’s past. These cards take up the basic land slot and have their own rarity ranging from Uncommon to Mythic. This means you could open a pack with two rares! Many of these archive slots are good removal spells, a few are reprints of old combat tricks, and some are obvious plants for Constructed. Keep an eye out on this slot as you draft as many of these will be sought after in your decks.

After doing a thorough review of this set, I can say with confidence that the power level of the commons is relatively flat. There are a few good ones, but most of the common cards range from slightly above filler level, to slightly below. All of the uncommons are just better versions of commons, or enablers for various strategies. The rares, and many of the Mystical Archive Rares are incredibly powerful and will often be first picks.

What does this mean as you get ready to make your first pick? It means in most packs, you should be looking at the rare (or rares!) and the uncommons. Do not be afraid to first pick a gold card. You’ll likely be able to find enough playables with a flat common power level. If you are looking to draft the open lane at the table, keep your eye out for good uncommons going late. Seeing a Witherbloom Apprentice past pick 5, likely means that most of the table is not drafting Green Black. In future articles, we’ll talk about some cards that are good in multiple decks, and can help you navigate the draft.

The last mechanic to focus on is the Learn and Lesson mechanic. Several commons and uncommons allow you to Learn when you cast them. This ability allows you to “Rummage,” that is discard a card to draw a card, or to get a Lesson card from your sideboard and place it into your hand.

There is also a dedicated Lesson slot in each booster meaning there will be at least 24 Lessons at each draft table. Learn is already powerful on its own allowing you to dig for action or lands, but when combined with the flexibility of a sideboard full of lessons it becomes even better. You’ll want to prioritize the good Learn cards and then grab the lessons a bit later. Pay special attention to the summoning lessons such as Inkling Summoning. These lessons are all commons and can be played in 3 of the 5 colour pairs making them excellent lessons to pick up. My first impression is that it will be better to stock up on Learn cards as they will function without the lessons, but you’ll still want as many lessons as you can get. If I finish a draft with 3 Learn spells, and 5 lessons I’m going to be quite happy. If I finish a draft with 1 learn spell and 8 lessons, I’ve been picking the lessons too highly.

The last thing to peek at before we dive deep on the Magic Colleges is the fixing situation. If you like drafting multi colour decks, I have good news! The fixing is here for you. There is a cycle of enemy coloured dual lands at common for example Lorehold Campus. These lands fix your mana and give you a late game mana sink. These will be quite good in the base colour decks and will enable a splash. We also have Archway Commons at common allowing you to fix for any colour. In addition there is Campus Guide, Letter of Acceptance and Environmental Sciences all at common.

Because of the way the Magic Colleges affect colour pairs, you’re quite likely to be splashing in a Wedge. If you’re playing Lorehold (RW) you’re likely to be splashing Silverquill (BW) cards. There is not much incentive for you to splash a green card in your RW deck, but you could in WB for example. Keep this in mind as you’re selecting your potential splash cards and looking for fixing.

That should do us for a basic course in Strixhaven. In my next few articles, we’ll cover the Magic Colleges and the key cards for each archetype.