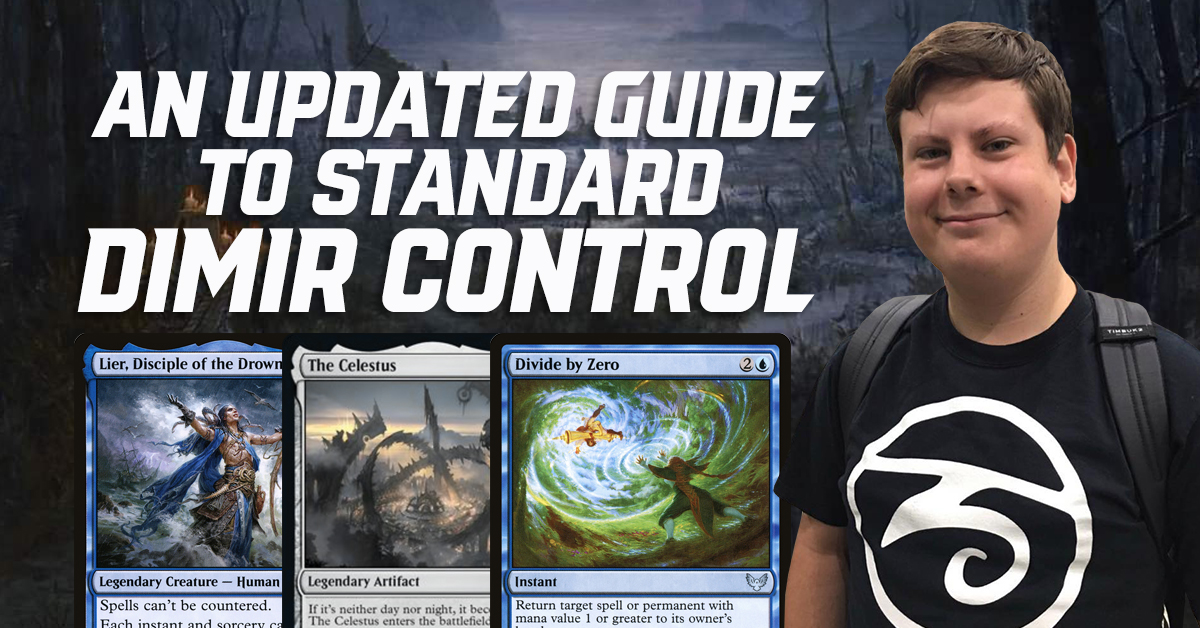 Alrund’s Epiphany has officially become enemy #1 in Standard. After Yuta Takahashi’s stellar performance in the World Championship with Izzet Dragons, Alrund’s Epiphany has earned its title as Standard’s current champion. Other builds of Epiphany performed well, including Eli Kassis’s Grixis Epiphany and Ondrej’s Stratsky’s dragon-less Epiphany build. While other decks have shown up in Standard since Worlds 2021, Epiphany still remains the reigning champ.

It’s not a surprise that the Epiphany deck is so efficient. Take a look at Stratsky’s build:

The innovation in this list comes from Unexpected Windfall, allowing you to ensure a copy to resolve with a Galvanic Iteration. Windfall lets you pitch unneeded cards in a particular matchup while pulling ahead on both cards and mana. It helps you ramp in matchups where you don’t have to worry about counterspells, and in the mirrors you get to rummage away your Fading Hopes and other removal spells. This list makes the most out of the spell package, fighting through both counter magic and allowing the deck to sift until it’s able to cast multiple Epiphanies in a row.

While Epiphany is a tough deck to beat, there are other options to consider. Let’s look at the deck that won the Redbull Untapped 2021 Qualifier 1, Mono Green Aggro:

One thing I’ve always appreciated about Mono Green is that the threats are diverse and versatile. Esika’s Chariot is essentially two 4/4’s spread out, all in one card, that has to be answered by multiple removal spells. Old-Growth Troll has high toughness for its mana cost and helps you ramp or make a replacement 4/4, depending on your draw. Ranger Class is a 2/2 with some great upside in grindier matchups.

The creature decks of Standard have access to multiple creature lands as well, helping them get in the last points of damage even in the face of multiple removal spells or a wrath. I also have to give Yann Rabay mad respect for his inclusion of four copies of Tajuru Blightblade in the sideboard, for the mirror match.

With Standard feeling condensed with Mono colored aggro decks and Epiphany at the helm, what’s the best choice to combat these decks? Awhile ago I championed Dimir Control as my pick to combat the Standard metagame, and while I had the right archetype in mind, my build was not even close to optimal.

Enter: Lier, Disciple of the Drowned.

From editing F2F writer extraordinaire, Eli Kassis’s article last week, it was no secret to me that Lier, Disciple of the Drowned was busted. Eli’s article clearly outlined all the reasons why Lier was so powerful. Untapping with a Lier can be game ending, doing anything from casting a swath of removal spells again on a board of creatures, casting draw spells to pull ahead, or even attack the opponent’s hand with cards like Go Blank and Duress. Lier is not the lone card that makes these strategies so powerful, however.

The Celestus is the key piece to making these decks as good as they are. The Celestus has a variety of uses. First off, on turn three you can cast a Celestus while casting a number of one-mana spells: Duress, Consider, Bloodchief’s Thirst, and Fading Hope. This allows you to put your mana rock/loot engine in play while also getting an Epiphany out of the way early or taking care of an early creature. In matchups such as Izzet Epiphany, Celestus loots away your unwanted removal spells and digs you closer to your action spells.

Let’s take at this list that Top 8’d the most recent MtGO Standard Challenge:

It’s honestly kind of funny to see a competitive control deck that has virtually no counter magic, in the traditional sense at least. The goal of this deck is to get your opponent at parity and then take over with Lier. I love that Lier nerfs your opponent’s countermagic in a variety of ways. It not only shuts off their hard counterspells, but completely stops Malevolent Hermit in its tracks. Lier also is a great answer to Hall of Storm Giants as well, negating the Ward 3 trigger and paving a clear way for your cheap two mana spells to trade up with your opponent’s seven mana.

I’m not sure I really like Crippling Fear over a second copy of Shadows’ Verdict, however. Crippling Fear does clean up most of Mono White and Mono Green’s threats, but it fails to kill cards like Old-Growth Troll, Reidane, or a Wrenn token. I do like all of the one mana spells though. I didn’t know how I felt about Consider at first, but after playing with it it’s a vital part of the deck. It helps shape up your early draws, especially if you’re trying to hit an early Celestus or discard spell vs Epiphany. Later on in the game its value skyrockets, helping you dig for very specific cards, or binning spells to cast later with Lier. Casting Consider in this deck brings back memories of a certain Ancestral Recall episode as well:

Besides swapping the maindeck Crippling Fear for a Shadows’ Verdict, there isn’t much I’d change to this deck. I think you can swap out some of the spells depending on a specific metagame you’re expecting. One card that I do think might make the cut in my sideboard is none other than Return to Ravnica Standard sideboard all-star: Pithing Needle.

But Roman, why Pithing Needle? You may ask. Good question devoted fanbase. While this deck is already positioned to beat Mono White and Izzet, the Mono Green matchup can still be tough. As stated above, Mono Green has access to a diversity of threats that dodge one for one removal well. Pithing Needle is a helpful way to shut down some of Green’s prominent threats while also being a cheap card to cast on turn three off a Celestus. Needle shuts off the activation of Esika’s Chariot first and foremost, but can also be used to stop Wrenn and Seven, or even any of the creature lands from bashing in.

Additionally, Pithing Needle can be used to stop Old-Growth Troll’s triggered ability, but make sure you name Basic Forest as opposed to Old-Growth Troll (for more info check out the Underworld Connections/Pithing Needle interaction that constantly came up during RTR Standard). Pithing Needle might not be the best answer in the world, but I like that it hits multiple cards vs Green and is a cheap way to turn Day to Night and vice-versa.

With all of this in mind, I decided to sleeve up the deck for a team trios event (Standard, Modern, Legacy) and my home store, Collector Legion. I teamed up with some Eternal format gurus who desperately needed someone to fill the Standard seat, and I was happy to oblige. With a somewhat small turnout we ended up with a four round event that cut to top four, and after two victories, our team was locked.

Unfortunately, while I secured my match win in the semifinals my teammates, on Temur Rhinos and Izzet Delver, lost to Azorius Control and the Izzet Delver mirror, respectively. While we didn’t make it to the finals, I was content with my play and learned a lot about the deck during the event.

Of the five matches I played against during the day I maintained a record of 4-1. Round one I defeated an interesting Esper build of Dimir Sedgemoor Witch. While that deck plays countermagic, once a Duress clears the way for a Lier followed by any wrath, it’s essentially game over. I was able to manage my opponent’s cards with my suite of removal and discard, and any resolved Lier was lights out.

In round two I defeated Mono Green aggro, a matchup I had tested extensively before the event. My goal was to survive each game until Hall of the Storm Giants could take over blocking duty until I drew a Lier, and that’s exactly how my games went. I did in fact draw a Pithing Needle in game two, but my opponent never drew a target for it before I clinched victory. I was extremely happy with the second Shadows Verdict maindeck, since it cleans up practically every creature from the Mono Green side. Crippling Fear would’ve been a liability, since it would’ve failed to kill my opponent’s Wrenn and Seven token and their Kazandu Mammoth that had a +1/+1 counter. Crippling Fear is a fine sideboard card against Mono White, but I’d rely on Verdict to get the job done in the majority of your matchups.

Round three I was paired against the powerhouse team of Mythic Champion Eli Loveman and popular streamer Jana Amari. Jana was on Izzet Dragons, another matchup I felt comfortable playing against. Both games went as best as I could hope, with an early Celestus both games helping me facilitate my draws and digging me closer to Lier plus Duress or Fading Hope to protect it. One important thing I learned about Lier is how critical your use of your flashback spells is. It’s incredibly important to sequence your Considers and other draw spells effectively to draw into your ways to stall the Izzet deck. Your biggest concern is Hall of the Storm Giants and Alrund’s Epiphany. The dragon creatures (if they play any) aren’t that much of a concern since you have lots of spot removal to deal with those cards already. The most important play pattern I noticed once I had an active Lier was to Divide by Zero my opponent’s Alrund’s Epiphany that they had in exile, and then follow up with either a Duress or Go Blank to remove it entirely. This is kind of a Dissipate with extra steps, but you do what you have to do to out-tempo them.

Round four I took a loss against another Izzet opponent, against one of my many LA nemeses, Peter Quach. Game one I tapped out for a Go Blank with an active Lier when I should’ve kept up a Divide by Zero for a potential Alrund’s Epiphany, and ended up losing to multiple copies of Epiphany. Game two I was outmatched by multiple Malevolent Hermits with no Lier in sight. However, in the semifinals (paired vs Peter again!) I clawed my way back to victory, making sure to manage my resources as best I could in the face of Peter’s multiple foretold Epiphanies. It goes without saying Lier is the most important card in any matchup, as it stops Malevolent Hermit in its tracks and allows you a window to out-tempo Alrund’s Epiphany. However, I actually won my game three by going all-in on Hall of the Storm Giants after tearing apart my opponent’s hand with discard spells.

While we didn’t end up clinching the semfinal match as a team, I was still happy to have been able to team up with fun and positive teammates. Team events are always a blast to play and I was at least happy to have beaten every opponent I was paired against.

Dimir Lier is definitely a big contender in Standard and might be the perfect answer for a format overrun by Izzet Epiphany and Mono Green/White aggro decks. I felt rewarded for not only my practice with the deck, but for my card choices for each individual matchup. While there are only a few weeks remaining in the Standard format, I think it’s the perfect deck to grind with on the Arena ladder or take to the SCG Invitational if you’re expecting lots of Izzet Epiphany. Depending on how the net set turns out, Lier could become one of Standard’s #1 enemies, but for now I’ll keep on casting my Dimir spells until someone stops me.