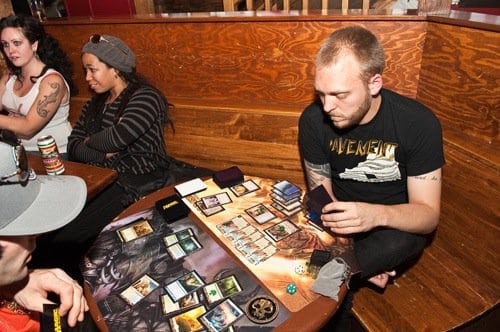 Well, it happened. That’s right, I’m back to Mana Deprived. I never really went anywhere, though. The BCSM (Broken City School of Magic) is now just on a much more manageable article schedule. I don’t actually come up with enough content to write weekly articles as I had been doing in the past. Still, I’m hoping to get a bunch of content out once the school year is finished. Maybe I’ll finally beat KYT in some matches we record for video content?

Anyway, there was another one of those PTQ things in Alberta last month, and things did not go quite as well as the time before. If you’re curious about the last one, you can check out my PTQ report here. I ended up with a final record of 2-1-2, getting knocked out by accumulating my second draw. Of course, a 5-1-1 record was not a guarantee of top eight placement, as fellow Mana Deprived player Doug Potter knows all too well, but I was not fully out of contention until that last, fateful draw. After the draw happened, it got me thinking a lot about draws, and so now you, the loyal reader, gets to read all about draws. So sit back, relax, crack a beer (it’ll make it way more interesting), and enjoy my discussion of the art of the draw.

Now, everyone knows the basics of the intentional draw. You go undefeated for however many rounds, you draw with the other undefeated players and you’re a lock for the top eight. Congratulations. This is a very common magic scenario; no one wants to have to play those last two (or three) rounds, lose them all, and not make it. When you can all draw twice and make the top eight, there is no reason not to do it, as far as I see it. There are players who don’t believe in intentional draws though, which I find interesting. I guess they feel that it is against the spirit of the game, although it is clearly not against the rules. The way the Magic tournament rules are structured it currently heavily supports the double-draw in.

There’s also the case of the last round draw at x-1-0. This can be beneficial in a couple situations. If you have excellent tie breakers and can convince your opponent to agree to it, it is likely to put you into the top eight. Also, if you’ve scouted your matchup and feel you’re unlikely to win, then you may want to offer the draw, but your opponent is much less likely to take it. Basically, if you feel like your breakers are better than your matchup percentage, you should attempt the draw.

There’s also the category of the more nebulously strategic intentional draws. During round three of the aforementioned PTQ, fellow Broken City Magic-er, Jared Maguire, and I were paired up in the 1-1 bracket. We shuffled up and prepared to play, but ultimately chose to draw, as by drawing we would both be at least in contention. I put the decision of whether or not to actually draw in Jared’s hands, as he was playing Elves and I was playing Faeries, and I had not won a match against him in testing (note: we played afterwards for fun and I won – ballin’). Now, it may have been a better call for one of us to just get a victory, but at least we were both still alive. My handsome editor, Shawn Petsche, proposed another interesting early draw scenario to me. If your deck is weak to aggro, but has good matchups against control, it might actually be beneficial to accumulate a draw early, if the situation arises. The rationale here is that there will be very few aggro decks in the draw bracket until the later rounds, while control decks are significantly more likely to get an unintentional draw, and you can theoretically get more of the matchups you want, albeit at the cost of perhaps drawing yourself out of the tournament. I’m not, nor is Shawn saying you should attempt this, but it’s something to think about: the effect an early draw will have on the rest of your tournament.

Let’s face it; you all knew this was coming. I got an unintentional draw, and that is what brought on this column. I was 2-1-1 at the time, and I was playing Faeries against UW Stoneforge, so it was sure to be a slow game. I mulliganed to five in the first game, and was sure to shuffle well between mulligans, in an attempt to properly randomize my deck. I won a fairly long game, and then mulliganned to five again in game two. I am not complaining about the bad luck of the mulligans themselves, just the amount of time that it took to resolve them. Game two was a long affair, in which I had a slight edge early and then it slipped away when I stumbled (read: drew lands) a bit. I should perhaps have conceded earlier in the game to save time, but I still felt fairly good until near the end. Anyways, in game three I was keenly aware that we were near time; I snap kept an aggressive hand and didn’t get there.

As is convention, a concession was discussed. I was unwilling to back down and be the one to concede, and so was my opponent. I harbor no ill will towards my opponent, and he did not play slowly. It was mostly the mulligans that did us in, leading to my feeling like it was a completely needless draw, one that eliminated us both from the tournament, not because either of us played poorly, but because of luck, and because of deck choice. For a brief time after, I was angry at draws.

Now, it is silly to be mad at draws, they’re the most neutral concept ever. I understand this, but I was still mad at them, and a little bit on tilt. I mostly wanted our situation not to be repeated. How could I have avoided the situation? I could have played a deck that did not require quite so many decisions. However, I have not had many issues with draws in the past, and I was quite familiar with the deck, having played it for almost the entirety of the PTQ season. I could lobby Wizards of the Coast to extend the amount of time given for matches, but that is ridiculous, as tournaments are already fairly lengthy affairs (moreso in other places, in Calgary we are blessed with very good TOs). There might be some kind of a reasonable solution, though…

Draws: What Are They Good For?

While thinking about the possible elimination of draws, it occurred to me that there was already a form of Magic that does not include the draw as a possibility: Magic: The Gathering Online. Magic uses a “chess clock” system: each player has x amount of time to finish their portion of a given match. Now, it is impossible to port MTGO’s “chess clock” system to real magic, as there are far too many shifts in priority in real life for it to be feasible. Additionally, TO’s probably do not want to have the additional costs of clocks to be added on to the all of the stuff they already pay for. However, it is interesting that draws, intentional and unintentional, a very real part of the paper Magic tournament scene, are simply non-existent in the world of MTGO. It makes sense, as the no-draws system works very well on MTGO, where there are no judges to be called when stalling occurs, as well as latency issues.

Still, it seems odd to me that draws will not occur online, that everyone who top eights an online event will only have wins and losses to show for it. It’s proof that the system still works, though. You can have a PTQ without draws and it will still run smoothly. Tournament math would actually just be easier. I’m not even certain I want draws to be eliminated in paper Magic. I’m interested in hearing about people’s feelings about draws. Should they be eliminated if a good replacement system can be found? What would that system look like?

I’m going to throw out an idea for such a replacement system, but I’m not sure if it is actually any good, as it would still seem to favour certain styles of decks over others…

Matches are played as normal, but after 50 minutes, time is called. Instead of five turns being played, six are played instead. If either player dies during these turns, they lose. If not, the net life lost during the six turns is calculated and whichever player lost the most life loses the game. If both have lost the same amount, each player takes one more turn, and this is repeated until a victor is crowned. Obviously this would lead to occasional matches taking a very long time, but I feel this would not happen frequently enough to be severely detrimental.

Anyways, this is just one of what I imagine to be quite a few suggestions for the ending of draws. I’d love to hear other suggestions for replacement systems for draws, as well as everyone’s feelings on whether or not draws should be eliminated entirely. You can post in the comments here or toss me a tweet: @thedoctorbaker.

Anyways, that’s it for draws. May all your matches be decisive.