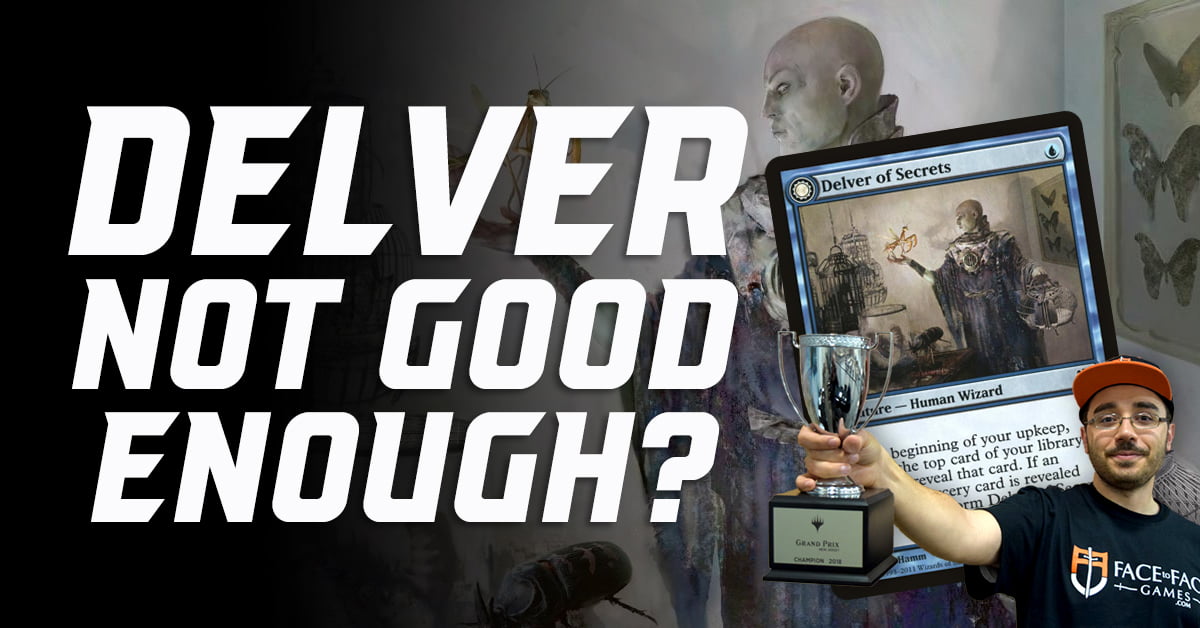 I know the title is a gotcha title. Here’s the thing though. Modern Horizons 2 is so broken, I mean it. Delver of Secrets is no longer powerful enough to make the cut in Izzet Delver. Let that one hit you for awhile as people used to rant and rave about how a one-mana 3/2 flyer was too overpowered.

At the time I am writing this article, I have the trophy leader position in the Legacy League on Magic Online. The majority of my trophies are thanks to the Legacy version of Izzet Blitz. I have made a number of changes that I am going to talk to you about, but first let’s review the new weapons that have put this deck firmly in the Tier S category.

Ragavan, Nimble Pilferer. The card is banana’s, people obviously know this already. Having an opener with Ragavan + Daze + Volcanic Island feels like a 3-card combo deck. Heaven forbid if you are actually on the play with all 3. Games tend to not be very close at that point.

Dragon’s Rage Channeler is going to be a card of much discussion here. Because I imagine the question people will ask is “Isn’t Delver just better?”. I assume because people are taking this approach “Well you need to turn on Delirium and it has to attack.” I’d like to think we could shatter that argument by proposing this – What if there was a card that for one red mana and gave half the spells in your deck Surveil 1? Add to it that it’s a threat and feeds the Delve ability of Murktide Regent! That spell is a no brainer in my book.

Expressive Iteration has of course been insane. In days past Delver could fall behind on the card advantage front when you had to double daze a spell for instance. Running out of gas was a thing, but no more. Expressive Iteration catches you up real quick. It acts like the second cousin, twice removed from Treasure Cruise. However, it feels great every time it resolves. It’s especially sweet to see Mishra’s Bauble with Expressive Iteration because of the free synergy.

Let’s start with an examination of the flex spots for discussion. 2 Mishra’s Bauble, 1 Pyroblast, 2 Unholy Heat. That’s really it, just 5 cards. The rest of the deck is pretty locked in and stock. Whereas others are putting 4 Delver of Secrets in these slots, I am trying to take advantage of cards that typically deal with threats and enhance my other broken spells. Often you’ll need to Unhuly Heat a threat out of the way of your Ragavan. Maybe even just kill theirs before it can hit you and putting a blocker out just eats a Lightning Bolt. Very important to not forget that Unholy Heat does hit planeswalkers! It’s killed many a Karn, the Great Creators for me.

Mishra’s Bauble has really only been played in Modern versions of this deck. I have however built the deck in a way that Delirium is a tad more important and I wanted to utilize this overpowered Modern spell here in Legacy as well. It’s quite fun playing a Turn 1 Dragon’s Rage Channeler and then a Mishra’s Bauble and getting extra value. Sometimes even being able to create a Turn 2 Murktide Regent!

Now you may have noticed that I didn’t mention the 4th Murktide Regent in the flex spots above. That’s because in my mind the card is freaking insane. Better than Dragon’s Rage Channeler even. What’s even sicker is in multiples they make each other grow even more! I don’t really know why others are only running 3 copies still. I tried 4 and I don’t think I’ll ever really go back. The general principle with Murktide is it climbs over the majority of removal spells. Which is especially nice when people are playing 4 copies of Prismatic End.

Sometimes I’ll employ a fun strategy when I know my opponent is over-sideboarded on removal spells. I’ll bring in Surgical Extraction and actually sideboard out my Dragon’s Rage Channelers. Then through the game I’ll only ever Dash Ragavan, Nimble Pilferer, which inevitably leads to it getting Swords to Plowshares. Surgical the Swords and then land a beafy Murktide Regent and it can be lights out. Prismatic Ending ends up clogging up their hand waiting for a juicy target that never shows up. It feels like you’re getting them good with this strategy, but I also just think it’s the right play in the 8 “Swords to Plowshares” matchups.

Classic stock lists are forced to try and play through the above scenarios and you’ll find anyone that runs the 8 Swords lists will boast about how good their “Delver” matchup is. So I am glad I can throw a curveball at those lists with maneuvering, but also some good sideboard tech. Court of Cunning has impressed me immensely. Not only has it been a one-sided Howling Mine in most control matchups, but it’s also a win condition on its own. One of my matches for my 5th trophy was against a Stax list. Not only did it draw me into repeated counters to stave off important threats. It milled out my opponent in a matter of 4 turns. Meanwhile they’re holding a bunch of removals and trying to sit behind an Ensnaring Bridge.

Another switch up from the “stock” lists that I am kind of surprised about is the basic Islands. Many people are running 2. The theory on this is that you may get Blood Mooned and then you want to be able to cast your Murktide Regent. Now the funny thing is almost no one is playing Blood Moon anymore (did you hear that lands?!). So you can get away with not having worse mana, since you almost always want to be grabbing Volcanic Islands with this deck. On top of that, if you do find yourself in a Blood Moon type of situation. Ragavan creates treasure tokens that can also pull you out of a tight spot.

A couple other sweet things you want to consider. Karakas comes in a lot. Not only does it bounce your own Ragavan to save it from removal spells. It returns Uro’s, their Ragavans, Hogaak, Griselbrand, Emrakul, and a whole lot more.

Alpine Moon is great for naming Urza’s Saga and in case you do not already know, the way it works is Urza’s Saga loses its chapters and goes to zero. Urza’s Saga is sacrificed as a state-based effect because it has more lore counters than it has chapter abilities. If they try to cast another, they won’t even have an opportunity to tap it for mana before it goes to the graveyard. Alpine Moon also allows us to name Dark Depths, which has traditionally been a tricky matchup for Delver decks.

Submerge can hit your own creatures. This can be important if you’ve got them really pressured by a Ragavan and the loss of card advantage is worth the specific amount of pressure. At the same time Court of Cunning can also mill yourself and your opponent which can help you dig to a Shenanigans or fill the graveyard for a Dragon’s Rage Channeler or Murktide Regent.

I tend to bring in Surgical Extraction against Doomsday players. I have actually won a couple games by targeting Doomsday post resolution. Shuffling their deck when they’ve stacked it has thrown them off by a turn or two. In addition you’ll want to hit a key component to prevent getting that far of course.

I’ll leave you with one last very important piece of advice. This is how I sideboard for the “mirror”, using quotation marks simply because others are playing more stock lists. In – Hydroblast, 2 Pyroblast, Red Elemental Blast, Karakas. Out – Force of Negation, 2 Force of Will, 1 Daze, 1 Murktide Regent. I’m sure boarding out a Murktide will feel weird. Keep in mind they are bringing in at least 3 Pyroblast effects. Not being able to cast these or having them easily killed will be one way in which you lose post board. For game 1s however, they are the crucial card in the plan for victory. Thanks for stopping by for a read and go crush your next Legacy tournament!