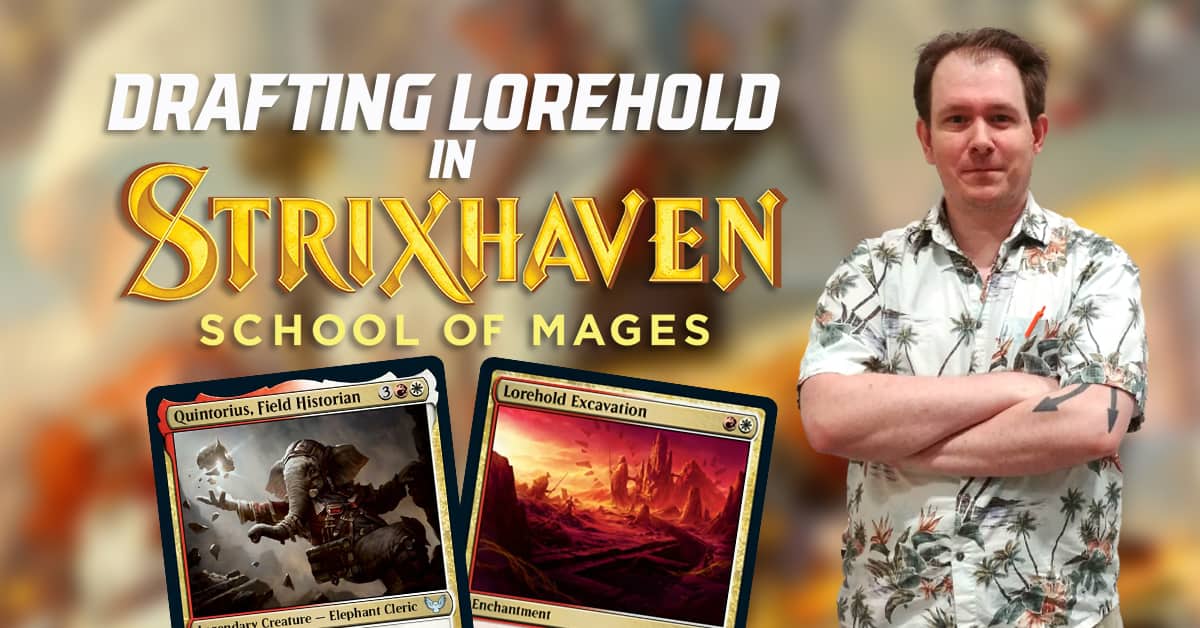 Good evening, students. You may be used to turning two drops sideways with your red white decks, but Lorehold has another lesson for us. The red/white colour pair is decidedly more midrange this time around. Though aggressive draws are still possible, Lorehold looks to play more like a classic limited midrange deck with some cool combo build arounds. As we’ve done with the other schools, let’s take a look at the commons and uncommons that make this deck function. We’ll start out with the uncommons that are just good cards.

Igneous Inspiration – 3 damage anywhere you want it to go, and a free lesson to boot. You’re going to want a lot of these.

Rip Apart – I’ve mentioned before that there are not a lot of enchantments to worry about in this set, and that most of the artifacts are underwhelming. For the few that aren’t it’ll be nice to have a maindeck answer with the flexibility to bolt a creature.

Professor of Symbology – We mentioned this card in the Silverquill review, it’s just as good here.

There will also be plenty of rares and cards from the Mystical Archive you’ll want to grab, but there is a great deal of synergy going on for Lorehold. Our synergy is cards moving from the graveyard into another zone. Here’s a simple combo that can happen with commons: spend 6 colourless to return Pilgrim of the Ages from your graveyard to your hand while you have a Fuming Effigy in play. Did you notice that both of those cards are Spirits? Our other synergy is the spirit creature type. Why not tap your Blood Age General after you attack?

Let’s dive in and see what we can do with some key uncommons.

Ardent Dustspeaker – I wouldn’t go nuts with 5 drops, but the Dustspeaker is bringing a lot to the table. Just by attacking it will trigger your “leaving the graveyard” effects, and can potentially be a divination every turn. Prismari will also be interested in this card, so it’s likely a safe pick early.

Lorehold Apprentice – You’re going to have more than a few spirits in your deck, and while this may be one of the weaker apprentices, it will provide you with some reach on a board that’s become clogged.

Lorehold Excavation – This is quite a powerful uncommon. You’ve got an enchantment that will give you a one point life swing each turn, a solid mana sink and an easy way to get cards in your graveyard. Many reviewers have said this card isn’t good. They are wrong, and you can take advantage of that by getting them much later than you should. This is one of the better enablers for Lorehold’s strategy.

Quintorius, Field Historian – We mentioned spirits and leaves graveyard as our synergy. Quintorius has them both covered. Make a spirit with your excavation and it’s like a buy one get one free sale! He even pumps all your other spirits. This is a premium uncommon, and a reason to jump through the Lorehold hoops.

Returned Pastcaller – Six mana is a lot, but you’re getting your mana’s worth with this card. A gravedigger for spirits and spells, a 4/2 flier AND you just triggered all of your “leaving the graveyard” effects. If I have 2 of these as my top end, I’m going to be a happy researcher.

Stonebinder’s Familiar is another reward going deep on the Lorehold synergy, and one that can start growing quite fast. Do note that it must happen on your turn. I don’t often like one drops that aren’t a good topdeck late game, but if you have the right synergy cards you should be able to trigger the familiar on the same turn you play it and turn it into a real card without much effort.

We’ll peek at a few commons to round out our lesson.

Guiding Voice – I’ve already speculated that this might just be the best white common. In Lorehold it’s giving you cheap magecraft, a counter, a lesson and some graveyard fuel. Again, don’t go crazy and play 6 of them, but be on the lookout for these on the wheel.

Lorehold Pledgemage – There will be versions of Lorehold that are more spell heavy. In those decks, the Pledgemage will be terrifying for your opponent to block or attack into. Also, a best friend of Guiding Voice.

Pillardrop Rescuer – This is giving you a flying body, triggering your synergy and getting you a 2 or 3 drop back to hand. You can’t play too many 5 drops, but this is one that will make the cut.

Stonerise Spirit – If this card was a 2/1, it would be too strong. That makes it perfect for Lorehold, as Silverquill will pass them. If you have enough payoffs for “leaving the graveyard” synergy, and a few cards that could take to the air, the spirit might be the right call for your deck.

Heated Debate – If something is alive, and you need it not to be, this is the card for you.

It is worth noting that the common red Learn cards are a notch below the white ones. They’re not unplayable, they’re just not great. I would plan to lean more on white for the Learning and red for the burning.

That’ll do it for today’s class, now get out there and Make Your Mark!