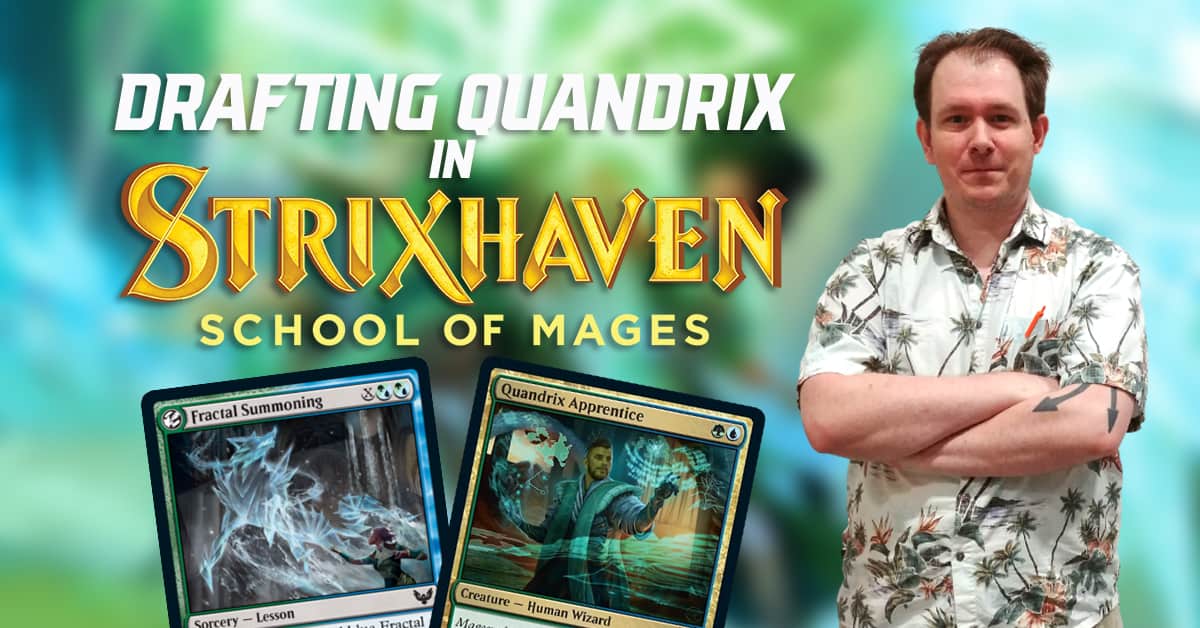 We’re almost through orientation and if math is your favourite subject, you’re going to love Quandrix! The blue/green colour pair has a lot going on with it, from solid creatures to BIG mana plays.

While Quandrix doesn’t have its own mechanic, many of the Quandrix cards will gain abilities when you have 8 or more lands in play. Some also create Fractal tokens (0/0 creatures that enter with some number of +1/+1 counters) like Biomathematician. Your synergy in this deck is going to be mana ramp, and things to do with a lot of mana. Having some good early blockers should also be part of your equation.

We’re going to dive in and take a look at the commons and uncommons that get this school really excited.

Aether Helix is a card I’m excited to get to play with. Regrowth and Unsummon is a potent card advantage combo, and when you think about splashing a few red cards with Lorehold’s “Leave the graveyard” mechanic, things start to get quite interesting.

Decisive Denial will function well in this set. When doing my initial set review with Jamie Rigatti we decided that we’d likely be interested in maindecking Negate in this format. Sadly, there is no negate. Instead we get most of a negate stapled to a fight spell! Sign me up!

Divide by Zero may not make much mathmattical sense, but it’s an auto-include in your blue decks in Strixhaven. This has the added flexibility of being good in Prismari as well.

Kelpie Guide is another card that will interest both blue schools, as both are looking to spend a lot of mana before they close out a game. In Quandrix we’ll be using it to ramp out our 8 drops (yes, 8) and then once we get to 8 lands, well, we have Icy Manipulator at home.

Snow Day is a card that will find a home in a few Quandrix decks. This is a LOT of mana to pay for the effect, but Quandrix is good at making a lot of mana. You may be able to close out a game the turn you play it, but it gives you another turn, and some card advantage on top of that.

Wormhole Serpent will block for you, and there will be some games just closed out by it.

Bookwurm is what we’re all about! Get me to 8 mana, and then let me slam this over and over. Don’t worry, I’ll show you how we’re going to get to 8 mana soon.

I mentioned Devouring Tendrils when talking about Witherbloom. The life gain is less likely to matter to us, but this is still a solid removal spell considering how big our creatures are.

Emergent Sequence is functionally turning one of your lands into a mana dork. It’s Rampant Growth that can attack and block. This is a great way to ramp and will enable a splash. It’s worth noting that this is the main splash enabler in green.

Master Symmetrist is a solid creature and one of the few in the set with reach. It will also be pumping all of your fractal tokens. This card is good on turn 4, and could be a mega overrun on turn 12. Value this highly.

Quandrix Apprentice is doing a lot for this deck. You’ve likely already figured out that Quandrix wants to hit a land drop every turn, and this apprentice is going to help you do that.

Quandrix Cultivator will help ramp you and provide a solid blocker. You’re not going to be able to splash with this card, as it only gets islands and forests, but getting from 4 to 6 while having a solid body will help you get to your late game spells.

Zimone, Quandrix Prodigy is a powerful late game mana sink, that may let you cheat a land or two into play early. I wouldn’t quite count her as a two drop, but she is good at blocking pests.

Ok, so we’ve seen what we’re going to do with our mana, how are we getting it? Let’s take a peek at the commons.

Field Trip is where it’s at. This is a key common for Quandrix decks. With the Learn tacked on, it’s not even dead late game! This is the easiest way for you to ramp, and it’s available at common. I would expect most Quandrix decks to be very interested in at least the first two copies of this card.

Fractal Summoning – I’ve mentioned how much I like all of the summoning cards. I think Fractal Summoning is a special one. Prismari and Witherbloom decks could play this, but they’re not quite as adept at ramping as you. This should mean you can grab this one a bit later, and take advantage of all that ramping you’ve been doing.

Needlethorn Drake – Need a good blocker while you’re ramping away? This drake has you covered!

Quandrix Pledgemage is just a Spellgorger Weird dressed up for Halloween. Well, almost. This doesn’t trigger on artifacts and enchantments, but there’s not that many of them to go around. You’ll need to get at least one counter on this to be happy with it, but the right Quandrix (or Prismari) deck could take advantage of this card.

Arcane Subtraction can potentially win you a combat and fetch a lesson. You have good Learn cards in blue and green, make sure you get some good lessons too!

Frost Trickster will serve a vital role at slowing down the assault early, providing chip damage midgame, and clearing out a blocker for a giant Fractal Token late game.

I always overvalue looters, and Soothsayer Adept is no exception. Whenever I play a ramp deck, I get nervous that I’ll draw all ramp and no payoff. With Soothsayer Adept, I don’t have to worry about that, as I can just cash in extra lands for more cards. It looks like it’ll block well early game as well, but do be warned I tend to like these types of cards more than other players.

Prismari Pledgemage will likely find its way into some blue heavy Quandrix decks as well. It’s a solid blocker and your ramp spells will allow it to attack on relevant turns.

Mage Duel is one of your best options for removal at common. The power and toughness boost combined with the natural size of your creatures, should get what you need out of the way.

Quandrix is less focused on any sort of cute synergy and more interested in the math of ramp, and counting to 20. With solid Learn cards in blue and green you should have no trouble finding the card you need. Pop Quiz tomorrow!