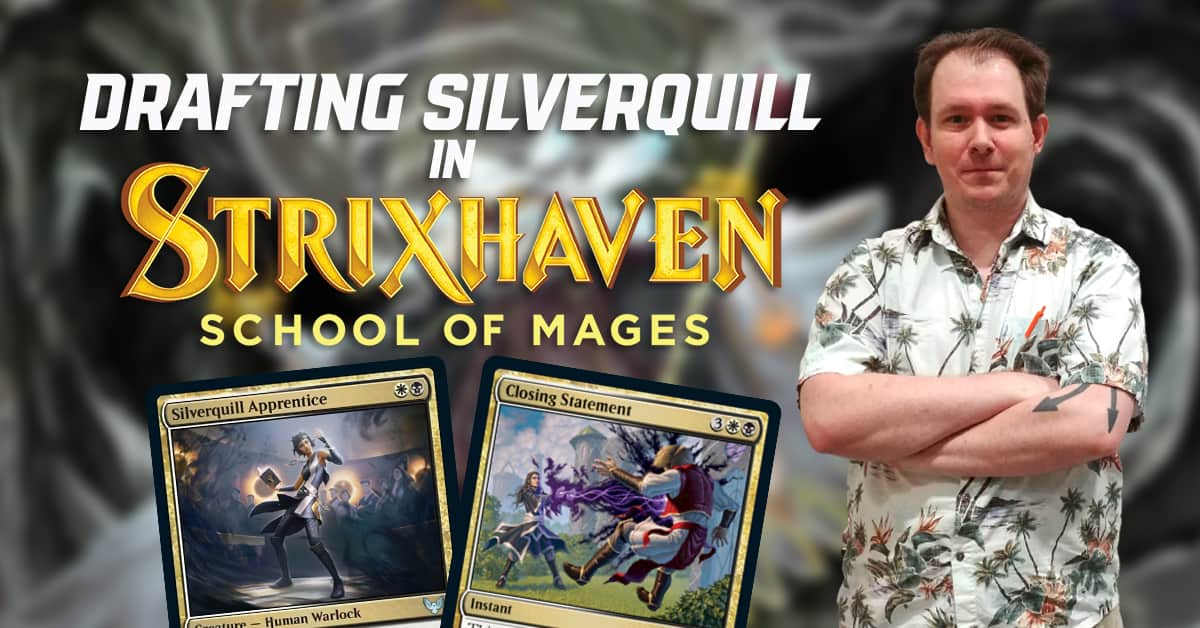 Class is back in session. Today we are going to investigate the Silverquill (WB) school. We’re going to continue to ignore rares and look for the commons and uncommons that make the deck tick, as well as flexible picks that can help you navigate the early part of the draft. To get started we need to understand that the Silverquill deck is the aggressive colour pair of the format. From previous experience I expected Lorehold (RW) to be the aggro boogeyman, but this is not the case as you will see shortly. Our goal as Silverquill is to get in early damage, and then close out the game with fliers, a well-timed removal spell on a blocker.

Let’s take a look at the solid early picks that might lead you into the Silverquill college.

Closing Statement – This is a solid removal spell with some flexibility on the mana cost, as well as a bonus counter. Counters are quite a theme for the Silverquill. In modern limited, removal spells need to either be cheap, or have the potential for a 2 for 1. This card offers you the flexibility of both.

Flunk – As mentioned when we talked about Witherbloom, this is a solid removal spell that scales as the game goes on.

Umbral Juke – We discussed this in our Witherbloom lesson, but the card should function quite well in Silverquill as well.

Professor of Symbology – While not playing into any of the Silverquill mechanics, this is a solid body and a way to fetch a lesson. This is a great early pick as it goes in both of the white colour pairs.

Killian, Ink Duelist – This is quite a solid two drop. You’ll be connecting in the early game, and may have some life gain payoffs in your deck. The discount affects your removal spells and tricks!

The above cards are just solid cards that you’ll be happy to play. Now we’re going to take a look at the synergy pieces in Silverquill. Your goal is to come out with an early board and augment your creatures with counters as well as begin an assault with fliers. It is worth noting that there are only three creatures with Reach at common, and one combat trick that gives reach until end of turn. Your fliers are likely to be able to connect, and will be difficult to block if their toughness goes above 3.

Shadewing Laureate – This card is hinting at the late game plan of Silverquill. You’ll be attacking in the air, and shuffling counters about to enable attacks. The narrowness of this card and the casting cost ensures that other colour pairs are not likely to want this card.

Silverquill Apprentice – The apprentice may not look like it’s doing enough at first glance, but remember you’re going to have a significant number of fliers and a good bit of spells in your deck. Consider casting Inkling Summoning and giving another Inkling +1/+0 with this.

Dueling Coach – Put me in, Coach! This card provides a late game mana sink and gets the counter party started. You’ll have lots of other cards that also provide counters, and I expect the coach will do a lot of work for you late game.

Once we move to commons, we see a few more cards that will support our strategies.

Guiding Voice – Guiding Voice may be the best white common. I’m not sure yet, and I wouldn’t advise running 6 of them, but this card is doing a lot for both white based decks. For Silverquill you’re getting a counter on a creature, which is part of our plan and being able to trigger magecraft while going to find a lesson! This is a lot of value for one mana! Keep your eye on this one. As a bonus, the “Hivemind” (everyone else that does limited set reviews) has rated this card unplayable. This could be a great opportunity early in the set.

Combat Professor – This is a well statted flier, and can enable an attack the turn it comes into play.

Expel – While obviously a strong removal spell, bear in mind this will not get blockers out of the way. The more fliers you have, the better this card will be as your opponents may be forced to race you.

Exhilarating Elocution – This card seems well-balanced as a one-of to trigger magecraft, and give you a way to push the last bits of damage. The more aggressive your deck is, the better this will play out. Do bear in mind it is Sorcery speed.

Arrogant Poet – While the poet is playable in Witherbloom, I suspect Silverquill will be more interested in the early game and the potential evasion.

Owlin Shieldmage – I wouldn’t go overboard on 5 mana 3/3 fliers, but if your deck can force enough damage to make the ward value a problem for your opponent, this could be a fine top end card.

Professor’s Warning – Being a worse Snakeskin Veil does not hurt this card at all. A one mana combat trick with the flexibility of saving a creature or winning a combat while triggering magecraft will be adding a lot to your arsenal.

There is even a bit of disruption available for you with Humiliate. Your deck is less interested in the late game, so picking a solid card and gaining information while putting a counter on a Star Pupil sounds like a great opener to me!

If Guiding Voice is as good as I think it is we may have an advantage in the early days of the format to wheel the 3 or so of them that we want, and stock up on lesson cards. Inkling Summoning is obviously the best one to grab at common, but do remember you can quite happily play Pest Summoning and Spirit Summoning in your Silverquill deck.

Time for recess! Don’t let the Spiteful Squad take your lunch money (but do feel free to include one as a blocker).