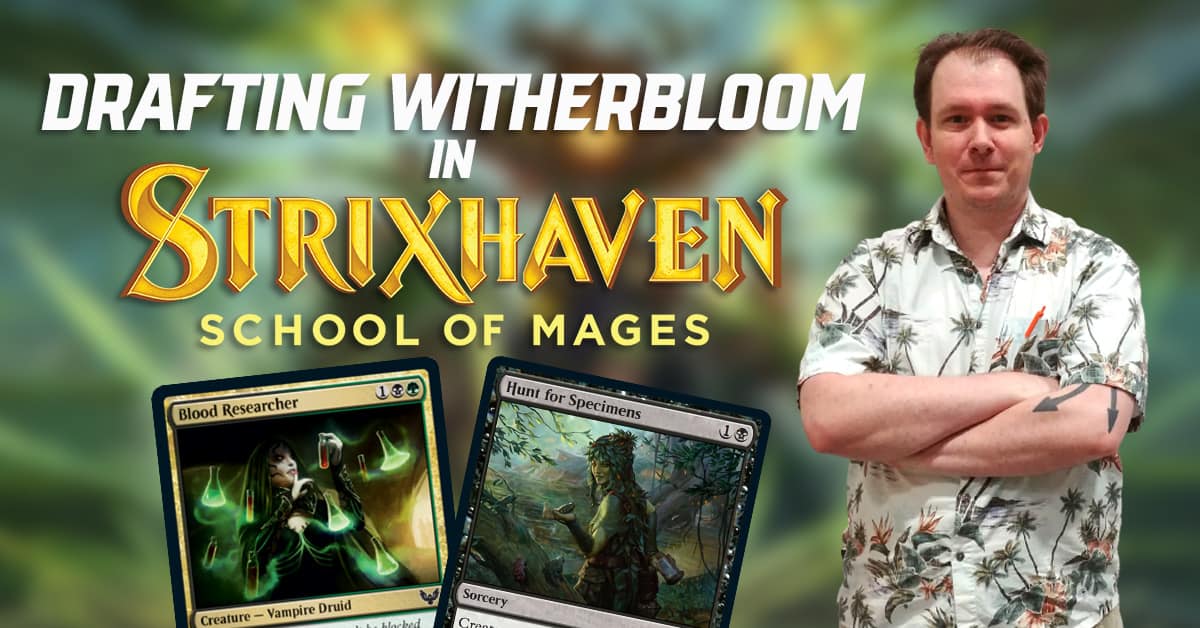 Welcome back! Today I’m going to share with you my early impressions of the Witherbloom (GB) deck for Strixhaven Limited. As we talk through the cards with Witherbloom, and the other colleges, I’m going to ignore rares. There are some wonderful rares in this set, but you should be able to recognize powerful cards and grab them when presented with the opportunity. What we are going to focus on are the roleplayers for the colour pair. What makes Witherbloom work in Strixhaven? Let’s find out!

Witherbloom has access to strong removal from black and green cards, solid creatures mostly from green, several cards that gain life, and several that reward you for gaining life.

Let’s focus on the solid cards in the colour pair first, and then dive in on the synergy pieces.

Flunk is a solid removal spell. At 2 mana and instant speed, Witherbloom decks will be quite happy to play this. It would also run just fine in a Silverquill deck, making Flunk an early pick while also being noncommittal.

Mortality Spear is a solid kill anything spell.

Umbral Juke has a lot of flexibility for 3 mana. This card could go in Silverquill, has the option to have your opponent sacrifice if that’s good for you, and the fail case of a flash 2/1 flier. All of this at instant speed!

Bookwurm – Ok, this is a lot of mana, but there will be some Witherbloom decks that can cast it, and this card is quite powerful. Be aware, it is a bit of a build around. You’re more likely to be able to build around it in Quandrix, but this card is something you can pick early and still stay flexible.

Devouring Tendrils – This is Rabid Bite with relevant upside to our colour pair.

As I mentioned in the first article, the uncommons have a ratcheted up power level compared to the commons in this set. These 5 uncommons are just good cards that you could play in Witherbloom. As we look at the synergy pieces for this deck the divide in power level becomes even more apparent. Your synergy cards will come in two pieces: Lifegain and Sacrifice. You will likely have some cards that want you to do each of these things.

Here’s a quick example of these synergies using commons. Hunt for Specimens will be a key card in black decks. In Witherbloom this gives you a body to sacrifice, and incidental life gain. What are you going to sacrifice it to? For starters, how about a Bayou Groff. Him’s a good pupper. And if you sacrifice a pest to a Groff while you have a Blood Researcher in play, you’ve had quite a good few turns. These are the synergies that Witherbloom is wanting to use to move toward victory. Now we’re going to take a look at the best ways to enable these strategies.

Let’s start with Overgrown Arch. This card may not look like it’s doing enough for the mana at first glance, but it is doing everything you want in a Witherbloom deck. Witherbloom has a lot of cards we’ll cover that are interested in gaining life each turn, and this little tree is one of the easiest ways to do it each and every turn. It’s cheap, can block early, trigger life gain on your opponent’s turn, and if it’s ever outlived its usefulness, just go grab the best Lesson card you drafted. This might just be the best Witherbloom uncommon.

Daemogoth Woe-Eater is filling both roles. It gives you agency over when your pests die, thereby triggering life gain, and can trigger life gain (and some card advantage) on its own. Not to mention it’s a 4 mana 7/6.

Dina, Soul Steeper continues in the same vein. You’re able to sacrifice pests when you want to, force a bit of damage and trigger the lifegain from the pests. Be aware, there are no playable enchantment based removal spells, so you’re not going to use this on a creature your opponent has pacified for example, but being able to sac pests at instant speed will be valuable.

Honor Troll is a lifegain payoff. I’d view this card as more of a reward for being in Witherbloom than a reason to get into it, but it is a solid card. Too many things have to go right for it to be a 3 mana 4/5, but I’d certainly run it in my GB decks.

Witherbloom Apprentice is a decent early game body, with a Magecraft trigger you’re very happy to have.

Brackish Trudge is a solid body to recur, provided you have repeatable lifegain effects.

As we move on to commons there is really only one lifegain payoff that gets me excited, and that is the before mentioned Blood Researcher. There are a few other ways to trigger lifegain, but most of them are oneshot and not something repeatable, for example Essence Infusion. A lifegain enabler that I think may be undervalued early in the format, is Silverquill Pledgemage. The ability to send this card in the air, or give it lifelink when you cast a spell is a lot to offer for a common. Do be careful though and side it out against pest heavy decks. We also have a few playable lifelink creatures in the colour pair.

When I’m sitting down to draft Witherbloom, I’m going to be looking for solid black and green removal spells, repeatable lifegain, and pest creators. There are plenty of other cards that work with this approach, as well as just solid creatures and spells in the colour pair. Professor of Zoomancy for example, gives you a solid body and a pest to sac. Look for lifegain payoffs a bit later, as they can be found at common.

Have fun drafting Witherbloom, and make sure to tweet at me everytime you play turn one Eyetwitch into Bayou Groff.