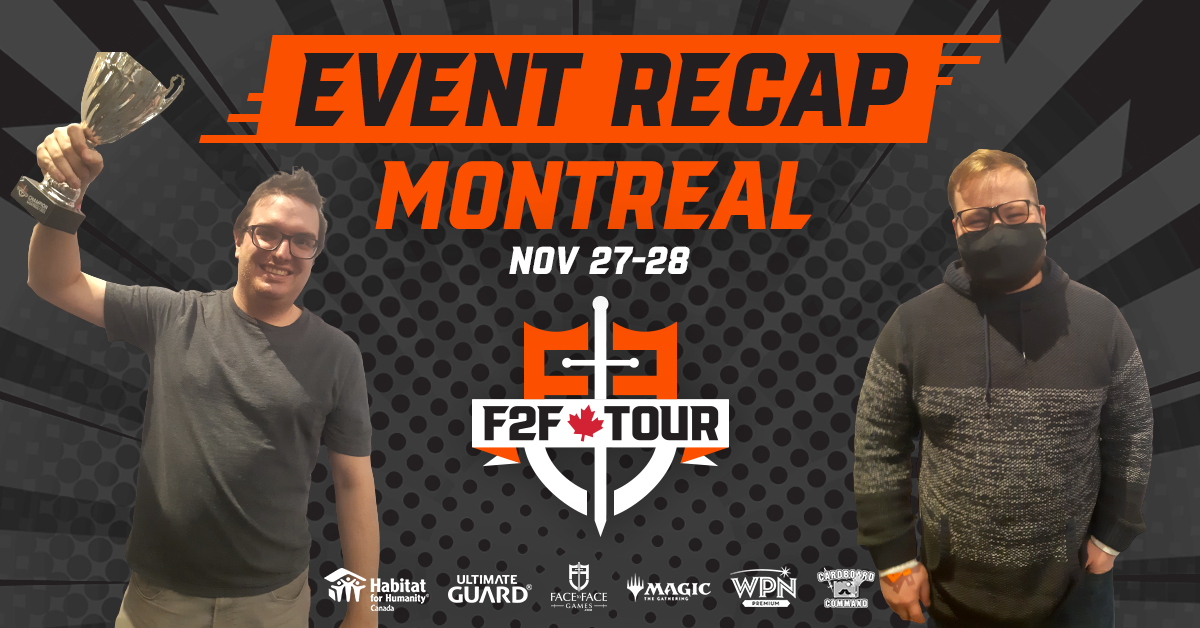 What a wild year it has been! The 3 F2F Tour events were each a complete success with Modern Opens selling out and Commander players everywhere coming to sling cards. After this series of events, you can definitely conclude one thing: people missed playing Magic in real life.

Robert Anderson piloted an old favourite in Amulet Titan and contributed his win to being “overwhelmingly lucky.” He was able to dodge Blood Moons and Dress Downs throughout most of the tournament. He made sure to tell me Cultivator Colossus was amazing!

If I had to give a “Performance of the Weekend” award, it’d have to go to Matthew Stein who managed to top 8 both Opens. Very impressive and maybe players should give this Azorius Control decklist a spin!

Michael Rapp won the Sunday Open with the deck he is most known for – Death’s Shadow. He brought adjustments to the table, playing 3 copies of Kologhan’s Command anticipating Hammer and RBx Lurrus decks. He also packed two copies of Tourach for the Solitude decks. When I picked his brain about the archetype this is what he had to say:

Being able to see the big picture of how a game is going to play out is important with any deck, but it is even more pronounced with tempo decks that play on thin margins, like GDS. Card flexibility is a strength of Shadow, but it requires a certain degree of format knowledge to know when you can afford to use which cards in which spots. Perhaps the biggest gain from having played a lot of shadow is the risk evaluation. Knowing when to lay on the gas, or play slowly is often the difference between a win, and coming up a few points short.

Dalia Morin had a tough run with Izzet in the Saturday Open, so she switched things up for Sunday opting to choose to play Rakdos cold. After the tournament, she told me Rakdos seemed very well positioned in the current metagame. She felt she could beat anything she faced and that the deck is very good at grinding out opponents provided they don’t play Leyline of Sanctity (her only loss in the Swiss was to Sam Tsafalas on Belcher who demolished her with Leylines).

Speaking of Belcher, Sam Tsafalas was able to eventually land a top 8 spot after defeating Dalia. He believes that because there isn’t a ton of combo decks in the format right now, players are ill-prepared to face off against the powerful Belcher deck.

Known mad scientist Norman Fried came with his own Bant concoction and managed to finish in the top 8 with it. This is a deck he recommends players to try as it preys on Hammer Time, combo decks and Cascade. The weak matchups to watch out for? Azorius Control, Tron and Amulet Titan.

I want to end this recap by thanking @MTGMuddstah, @cloveralters and the boys from @CardboardCmnd for stopping by and jamming some Commander. Fun times were had!

See you all next year! 😉