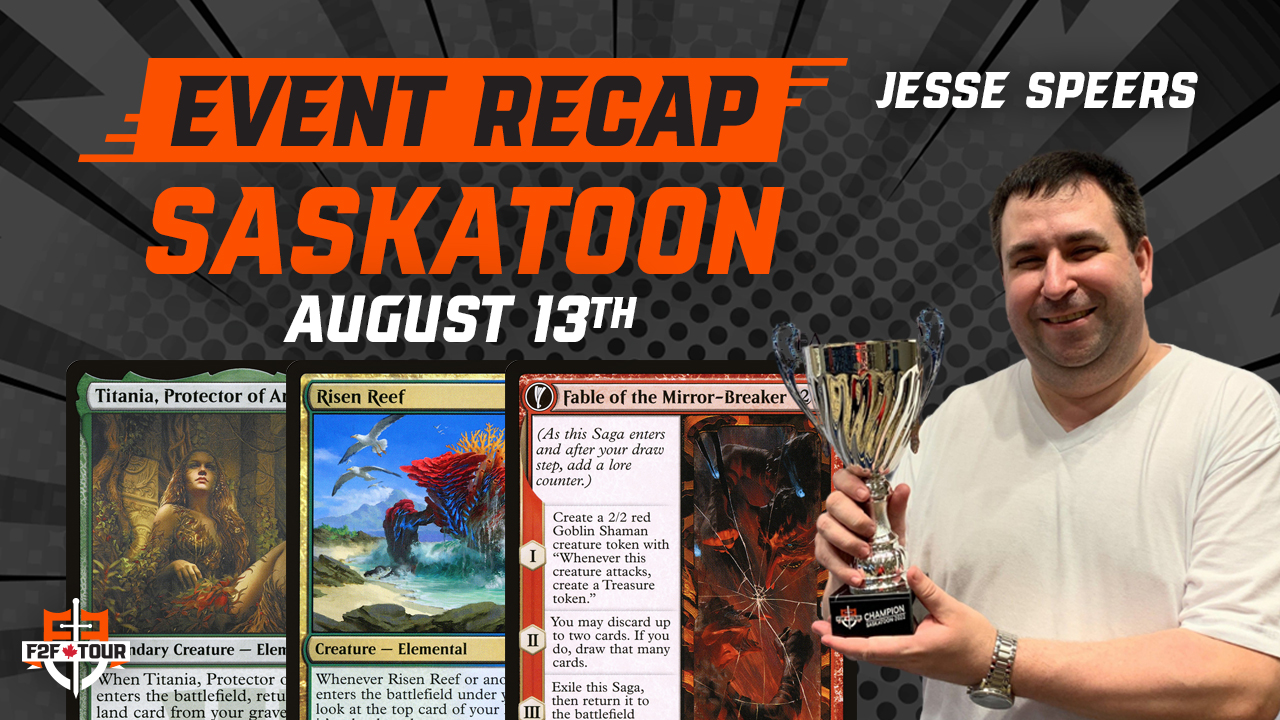 Continuing our impressive weekly streak of F2F Tour Stops, this past Saturday, we were in the lovely city of Saskatoon. If you missed our recent announcement, be sure to check our events calendar as we have added dates for Tour Stops belonging to Cycle 2.

83 players battled in our latest Open and the finals would feature what appears to be the two titans of the format. Jesse Speers defeated Jaden Dirk in the 4c Elementals versus Murktide Regent matchup.

Jesse was kind enough to share with me some specific tweaks he made to the 4c archetype.

“I have been playing a more traditional Delerium version with Emrakul in the main and even though that is supposed to be teched for the mirror, Risen Reef and Titania often still won. The mana was a bit better even on a lower land count when testing so we decided to merge things a bit.

We opted to remove Expressive Iteration, Mishra’s Bauble and Emrakul for the Risen Reef, Titania and Fable of the Mirror-Breaker. Fable provides incredible value letting you have extra ramp to use an earlier Omnath, improving Delerium and if you ever activate Kiki you almost always win.

Since we were on Fable we wanted to bring back some Utopia Sprawl for acceleration early with the ability to use Fable to re-draw late. Sprawl gets bored out in the card advantage matchups as the mana with Traverse and other packages is still amazing.

Best advice is trust the Risen Reef – Titania – Fable package. The sum is much better than any individual part.”

Steven Indzeoski is a familiar name at our F2F Tour Stops and he managed to turn in his 4th Modern Open top 8. Not bad! He tells me it’s his first one since 2018 though. When it came to his deck choice, it did sound like he put quite a bit of thought into selection his particular version of Amulet Titan.

“Amulet Titan is a great choice for anyone who is comfortable playing the Murktide, 4-Colour, and Living End matchups. I look up to a handful of MTGO grinders who play Amulet (Mistakenn, PuntThenWhine, Kanister, and HouseOfManaMTG/Jack Potter), but they all seem to have varying opinions on a lot of cards and all play different lists, so I was having a hard time settling on my list. I ended up going up with the most polarizing option, a recent list of Kanister’s, as I liked the 4 Hydroid Krasis plan for playing against Murktide and 4-Colour.

Another controversial reason I like Kanister’s list is cutting the Slayer’s Stronghold/Sunhome package for Hanweir Battlements. None of the other Amulet grinders play Battlements. I used to be against this, but the more I play with it the more I like it. The turn 2 double strike kill can come up, but I feel like it hardly ever happens, and Boros Garrison is by far the worst card in the deck so I’m glad to be rid of it. I also found that playing the Battlements version also simplified a lot of decision points, and made things easier, for very little downside.

The only change I made from Kanister’s list is -1 Emrakul, the Promised End and +1 Endurance. With 4 Hydroid Krasis I thought Emrakul seemed less necessary, and I expected a lot of Living End so I definitely wanted the third Endurance. Living End was both very popular at the recent Face to Face Regina Open, and at local Saskatoon Modern nights.”

That’s another one for the books! Next stop sees us visiting Grande Prairie this Saturday. Check out the event page for full details!