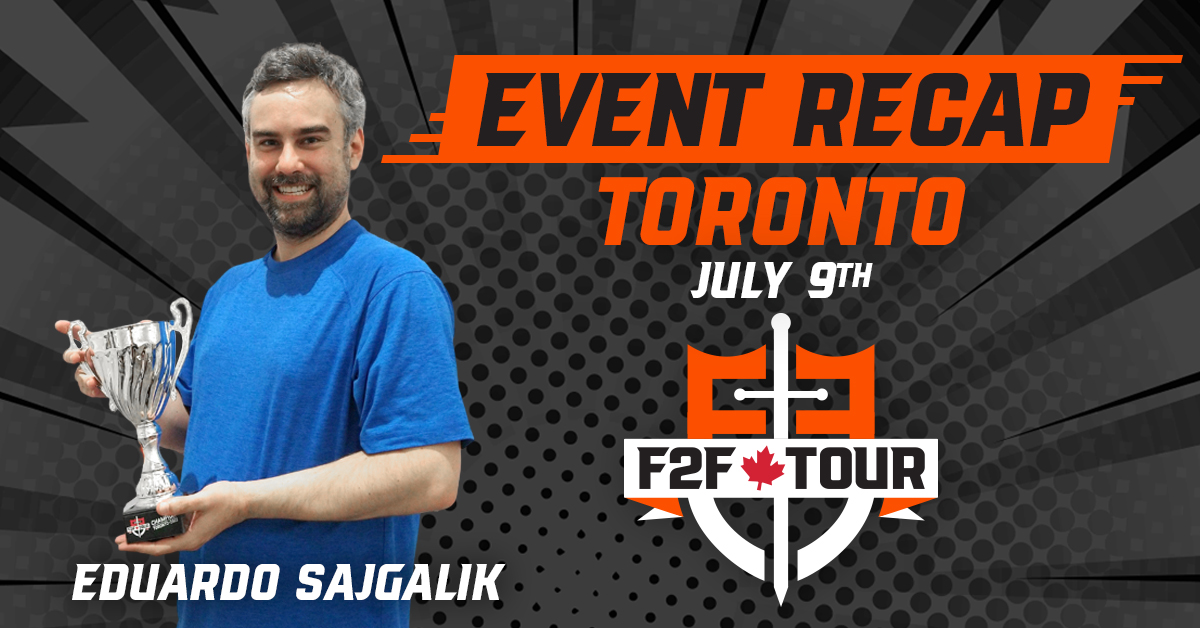 Another F2F Tour Stop, another BIG weekend of Magic. Don’t take my word for it, check out these photos from the event!

There were more than a few content creators (Cardboard Command, Mattcaster Mage MTG, Commander Mechanic, MrBevers MTG) that came out to battle!

196 players competed in our main event – the F2F Modern Open and when the dust settled, a familiar face took home the trophy. A frequent play-by-play commentator with multiple PT top 8s and a GP win to his name, Eduardo Sajgalik surpassed the entire field with 4c Yorion.

In my last recap, I had mentioned a few players who were consistently doing well at our Opens and for Ontario, Liam Kane is definitely someone worth mentioning. With another top 8, that’s 3 for 3 when it comes to Opens in Toronto. He piloted Murktide Regent which put 3 players in the top 8. After the event, he told me he was testing this version that ran 4 Ledger Shredder with 0 copies of Dragon’s Rage Channeler. Moving forward, he thinks some number of Dragon’s Rage Channeler is still correct.

Boston Schatteman, another familiar name in the top 8, also piloted Murktide Regent. He understands that the reasoning behind cutting DRC is due to the fact that it’s the worst threat in interactive removal heavy matchups like the mirror and 4c, but he thought he’d see less of those kinds of decks in a paper tournament vs. a big online one. Worked out great for him!

David Hall, another top 8 finisher, calls Rhinos Modern’s most overlooked deck but warns players to steer clear of it if their meta is filled with lots of Living End. He would ultimately lose to 4c Yorion and mentioned that it’s only chance in the matchup is being on the play with the nuts (Ice into Cascade into Force of Negation).

Notable streamer Derek Pite (@misplacedginger) made top 8 with Grixis Death’s Shadow. While he agrees with the idea that 4c Yorion and Murktide Regent are the two big decks, he thinks the matchups are close for Death’s Shadow and DS is far less likely to have to go to time than 4c Yorion.

And that wraps up my recap for Toronto. Our next stop? We are on our way to St. John’s! Check out the event page for full details!