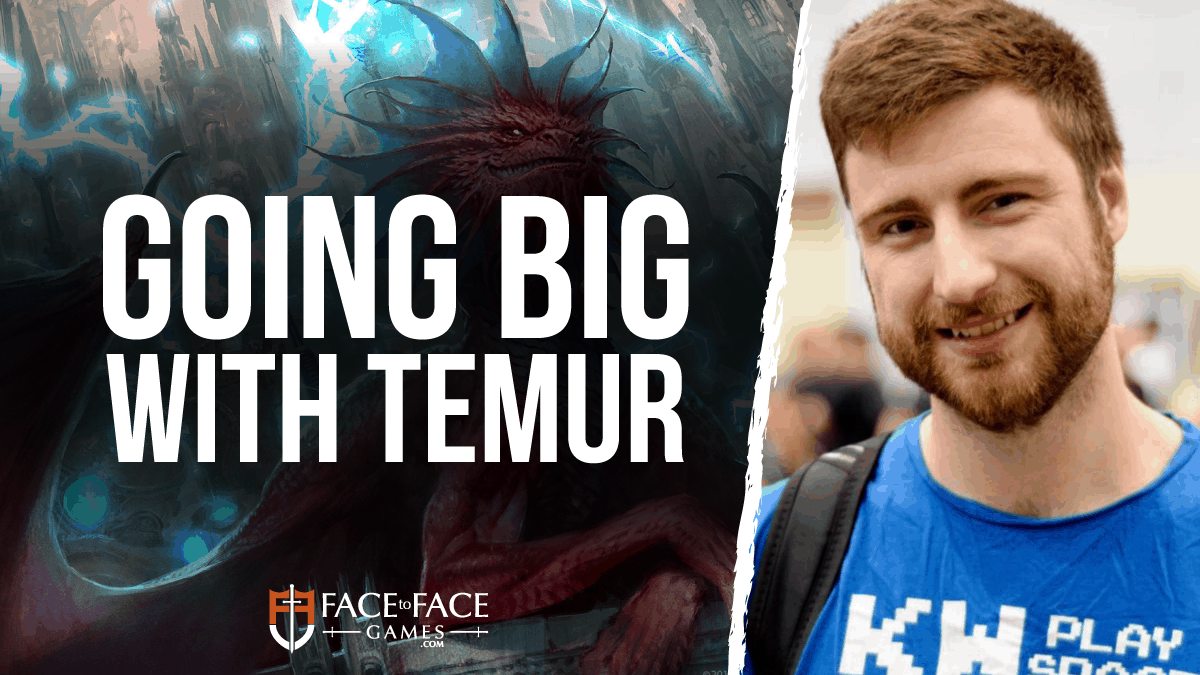 We’ve reached the second Pro Tour — ahem, Mythic Championship — of the season, and together, Team Face to Face Games has really hit our stride.

I feel we’ve really started to get to know each other and have begun refining our testing process. I’m writing this article Wednesday night, just after decklists have been submitted. We spent the first few weeks after Ravnica Alligence’s release almost purely on Limited. Most of the team attended Grand Prix New Jersey, with one poor soul forgetting a crucial step in the trip planning process.

Skipping my flight for #MTGNJ because I forgot to reg. No one to blame but myself, but I got other events coming up to look forward to. Rooting for @Fozefy and @Eli_Kassis to hit platinum, @tirentu to unwash himself, and @drood519 to prove to everyone he’s still one of the greats

Luckily the good luck offered from Mr. Magalhaes helped propel me to Platinum status after a 12-3 finish. I went over my process for quickly learning a new Limited format here, and it again proved fruitful. After spending the first few weeks focusing on Limited the team was ready to start testing Standard in earnest. Following a similar approach to what I’d explain in Limited the team started by playing as many decks as possible and collating all of our early results. Early on our team’s most promising deck was Esper Control. Edgar Top 8’d an SCG Open event with it and that very quickly sold the Esper Professor himself, Shaheen Soorani. However, something much sweeter was on the horizon — but more on that later. Esper Control looked to be in quite a good spot with good matchups against most of the aggro decks and a slightly positive matchup against the most highly represented deck — Sultai Explore.

As the format has continued to evolve Mono-Blue has risen to prominence, and this spelled some trouble for Esper. Playing a reactive deck that needed to have answers to such a diverse field wasn’t really something that seemed plausible at the highest level. It’s just too hard to beat Mono-Blue, Mon-Red and then switch gears and go long with Sultai. Mono-Blue’s rise was heavily influenced by the success of fellow Canadian Alexander Hayne’s week long rise and status at #1 Mythic on Arena while publicly streaming all of his matches.

With most of the MPL players publicly streaming it has changed our testing process. Everyone gets a look into the set of decks the best players in the world are considering for the Mythic Championship. While some teams and players may be hiding information, players only have so many hours in the day to focus on Magic, so it should be a fair assumption that most aren’t hiding much. This leads to a lot more open environment to what other teams may be considering.

In any case, with most of the team gathered at a house in Cleveland on Monday with fresh results from GP Memphis to go over we began jamming all of the top decks against each other. At the same time we’d begun exploring various rogue strategies revolving around the most powerful new addition to the Standard format [Card]Wilderness Reclamation[/Card]. With Mono-blue causing Shaheen some trouble and Nexus negating the Teferi loop win-condition he’d abandoned his flagship shard and brewed up a new Sultai Reclamation control deck. Sultai got to add potent threats doubling as card advantage against Mono-blue in [Card]Hydroid Krasis[/Card] and Ooze allowing the deck to put a clock on Mono-blue forcing them to play a more proactive game plan rather than sitting back trying to protect a single threat. Meanwhile Eli brewed up a Temur Reclamation deck adding to the stock Simic Nexus deck with Niv-Mizzet and [Card]Expansion // Explosion[/Card]. This change of end game allowed the deck a more effective way of fighting through counterspells with Niv-Mizzet being the ultimate end game against both Mono-blue and Esper Control which we were looking at as the top two deck.

Our next step was creating a quick overview of the format to give ourselves a general picture of each of the top deck’s strengths and weaknesses. To create it we sat together and built a matchup matrix containing every deck’s rough matchup percentages. Obviously these matchups should all be taken with a grain of salt as specific lists can vary greatly within a deck, but we tried considering mostly “stock lists” that had been doing well in the previous Grand Prix and other events. We also were much more sure of some matchups than others, but in any case it at least provides a very general understanding of the format. 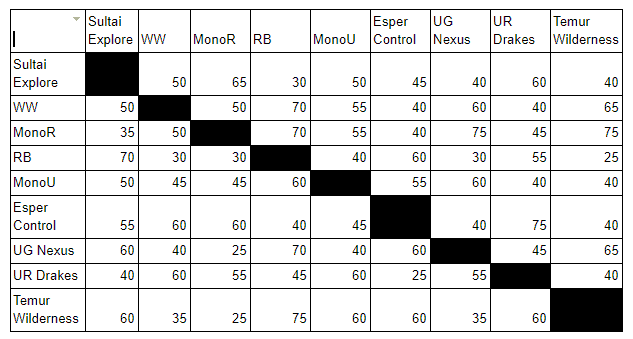 We then attempted to roughly predict our expected meta, and compared that to the GP Memphis Day 2 metagame. From this data we were then able to generate approximate win rates for each deck in our matrix. One note about the data below is that this only considered the early tournament metagame rather than the expected 10 round win-rate, which would require much more sophisticated statistics with what we felt would be minimal strategic gain. 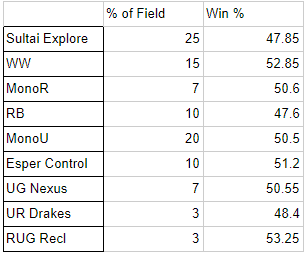 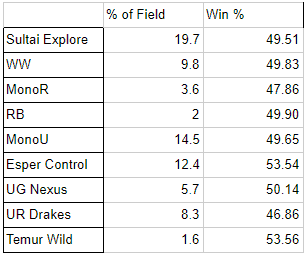 This metagame includes roughly 20 per cent of decks not included in our matrix, so for these purposes we just normalized the data ignoring those matchups. For one reason or another we hadn’t tested much with the decks outside of this set and therefore just didn’t have enough data to understand those matchups fully.

From this data the Temur Reclamation deck stood on top and got most of the team’s attention as a deck to really start considering. While we realized it had very poor white and red aggro matchups we felt that it had positive matchups across the board outside of those decks and the percentages worked out such that we thought we’d create the best possible win-rate. From there we spent the next two days tuning the list to where it is now. While we were unable to really fix the aggressive matchups, we feel very strongly about our plans in all of the other matchups listed in both pre and post board games. Therefore if our predictions were correct we felt that as long as we could dodge those deck early we’d become less and less likely to face them as the tournament went on. In this regard we were looking especially at our worst matchup in Mono-Red and it’s low expected win rate. Overall this format has shaped up to be fairly polarizing — every deck has strategic weak points.

The major stand out for us was the sheer power of [Card]Biogenic Ooze[/Card] with [Card]Wilderness Reclamation[/Card] in post-board games. We had initially been unsure about how our changes from the Simic Nexus deck would affect our Sultai matchup, but after trying the Ooze plan we were quickly sold. The post-board games are where midrange decks generally improve their matchups against combo style decks such like ours, when they get to cut all of their removal. However, the Ooze plan puts them in a major bind where they need to respect the threat with some amount of removal spells or quickly die in a slimy mess. While I’d originally missed the [Card]Wilderness Reclamation[/Card] interaction I’m glad my original prediction about the card’s power has proved correct.

While the Face to Face team and friends had some variation in our lists, we got over half of the group on the deck. This is the list myself, Edgar and Jacob Baugh registered for Mythic Championship Cleveland. Eli Kassis and Pascal Maynard also chose the archetype, but ended up being a few cards different. Pascal tested remotely and ended up the most divergent from the team with the most questionable change being him opting to only play two [Card]Opt[/Card].

Shaheen also stuck closely to his original reclamation Sultai Control list. He preferred a more controlling approach to the archetype than the more combo-oriented Reclamation plus Explosion or Niv-Mizzet end game. Gabriel Nassif and Pete Ingram decided to go with Sultai because they wanted a more balanced deck with reasonable matchups across the board. This allowed them to not have to worry as much about the polarizing matchups of reclamation. They’d also found a plan they liked against the reclamation decks we’d been testing and decided they could attempt to leverage play skill against the deck’s worst matchup — Rakdos Midrange.

In any case, we’ve now got a day to go before we begin to find out the results of our team’s hard work and I’m hoping for some good luck in the next few days. Hopefully when this article gets posted we’ll have been validated with some solid team finishes!