In Phoenix with No Hope: a Players Tour Top 8 tournament report (Day 1)

When I left for Players Tour Phoenix I really had no hope to do well.

It was Wednesday night and I was wavering on what deck to play:

In the right hand corner, coming in at 150 lbs, we have Dimir Inverter: Lean, mean and I’d tuned the deck enough to be very confident in the list.

In the left hand corner, coming in at 200 lbs, we had Sultai Delirium coming off a fresh 4-1 in a league where the only thing I learned was that I wanted a second [Card]Murderous Rider[/Card].

My record with Dimir Inverter, despite winning SCG Richmond with it, was 10-6 so I wasn’t super confident in it and I also knew that it would have a huge target on its back going into the weekend. However, I knew the list I’d prepared was good and I didn’t know where to begin or end with Sultai Delirium, especially with so little time before decks were due.

I settled on a Dimir Inverter list with Edgar Magalhaes, Jonathan Rosum and Dylan Donegan. We all registered close to one another’s list at around 1:30 am EST. The most important last minute choice I made was to add a second [Card]Damping Sphere[/Card].

Thursday rolls around and my Team BCW chat is popping off with several players saying their flights were delayed or canceled. I was worried because my flight was very late and basically one delay would leave me drawing dead to arrive on time. I was flying out of JFK which was lucky because the weather gods shined down upon me and all was well. I end up getting in at the hotel in Phoenix at around 1:30 am, and eventually fall asleep to wake up early the next morning to get cards and battle.

At some point on Thursday I get a Facebook message from Edgar which leads to us making a pact where if we 0-3 Draft, we have to book a flight to play in SCG Philadelphia. I’m pretty excited by this, considering my lack of faith in this tournament and also I don’t want to fall behind in the PC race. More on this later.

Friday morning Eli Kassis, Brandon Pascal and myself grab a quick breakfast from our hotel and head to the site. Draft pods go up and I get inspired to throw my AirPods in and listen to “Neato” by Three Loco, a tradition that will now be something I do at every PT. I get to my pod, sit down and the Draft gets underway.

Pack one, pick one I am faced with a tough decision: [Card]Calix, Destiny’s Hand[/Card] or [Card]Elspeth’s Nightmare[/Card]. I chose Calix based on the fact that I have lost to this card handily before and I think pairing either colour off with black and splashing the other will lead to a great deck. Thankfully when asked, Mike Sigrist agreed with my pick. I second picked an [Card]Elspeth’s Nightmare[/Card] but see no other black cards and quickly fall into Selesnya. I end with a sweet looking GWbu deck: 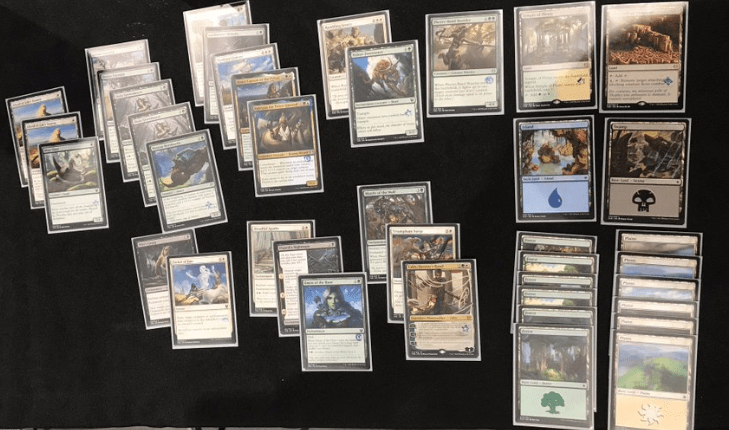 I played 16 land in this deck with Labyrinth, two Dryads and an Omen, I think it was more or less fine. I thought my deck could have trouble finishing out games so I incorporated Eutropia. I absolutely love this Limited format because I think there are a large pool of playable cards which leads to very interesting deck building.

Game one is super long and grindy. Nathanial has a sweet UGwb deck featuring [Card]Uro, Titan of Nature’s Wrath[/Card], [Card]Shatter the Skies[/Card] and a bunch of other really strong cards. I managed to narrowly win game one by running him out of cards. Game two looked like it would end in similar fashion, but his second to last card is [Card]Sweet Oblivion[/Card] which milled me out and forced a game three. With very little time on the clock I managed to get Nathaniel down to one life by turn four of turns, resulting in a draw.

Flores was on an aggressive Boros deck that featured [Card]Shadowspear[/Card]. Thankfully I was able to outrace it in game one thanks to [Card]Mantle of the Wolf[/Card] and [Card]Alseid of Life’s Bounty[/Card]. I boarded-out blue going into game two because I didn’t think I would need it to win games against such an aggressive strategy. Game two I played Mantle again and it was just as great as game one against the aggro deck and I was able to take the match down.

This match was extremely close. We both had similar decks although Tom was Golgari and we both had [Card]Elspeth’s Nightmare[/Card]. Game three Tom stumbled on lands and I was able to capitalize playing around both the removal spells I knew he could have on three black mana, which he did. Eventually Calix came down and that was enough to seal the deal.

I won game one fairly convincingly but games two and three my opponent was able to get [Card]Gideon of the Trials[/Card] down and I couldn’t get it off the table before it and some other creatures beat me to a pulp.

My opponent was on Mono-White Heliod again, this time with maindeck [Card]Leyline of Sanctity[/Card]. Game one a [Card]Gideon of the Trials[/Card] landed again and it was able to both lock me out of winning and beat me down. Game two I keep a [Card]Thoughtseize[/Card], [Card]Opt[/Card] and single land hand and my opponent mulligans to five and puts a Leyline in play which I completely forgot about. I boarded-in [Card]Ashiok, Nightmare Weaver[/Card] like a dope. I fail to draw lands and quickly get run over after drawing an Ashiok which is a fitting punishment for my stupidity.

How quickly we fall. Reality had checked in at this point and my mindset was completely shattered. I messaged Cory Baumeister who sadly wasn’t able to make the event and asked him if he would like to team for SCG Philadelphia assuming I get my third loss and am eliminated. That degen flight was looking more and more appealing by the minute at that point. Like the great friend Corey is he informs me that I need to chill out and that I can still win the PT. Corey, you’re great and I’m truly thankful we’re friends. You’ve made my event experiences so much better this year.

I lost game one but was able to battle back with the help of my sideboard cards. I’m having a tough time remembering what happened this match, however I do remember it being very close.

This match had razor thin margins and I narrowly escaped with a win. It came down to a pivotal turn in game three where I jammed [Card]Jace, Wielder of Mysteries[/Card] onto a board where I could die if his hand was good, but if he had to kill Jace I would likely win. Thankfully he had to kill Jace and from there I was able to narrowly maneuver my way into assembling [Card]Inverter of Truth[/Card] + [Card]Thassa’s Oracle[/Card] to win the game when he was hellbent.

After this round, Eli, Edgar and I all had win and in’s for Day Two. However, we were all on the win and stay or lose and head to the airport for SCG Philadelphia plan. I sat next to Edgar as I had for a bunch of rounds because we were both in the draw bracket. Both of our final matches were against 5C Niv-Mizzet. We were both torn at which result we wanted more, to win and stay for Day Two, or to lose and have a very sweet story to make a deep run in SCG Philadelphia.

Needless to say, I’m very happy with how things ended up.

I won game one after opening on some early discard and resolving the combo a few turns later. Game two was very interesting. I had ripped my opponents hand apart with discard and was super far ahead. I could go for the combo, but I would lose to a few cards if my opponent top-decked one of their three outs. So I went for a safer play of playing Jace on an empty board and plussing.

My opponent played a [Card]Niv-Mizzet Reborn[/Card], acquiring a [Card]Slaughter Games[/Card] and a [Card]Bring to Light[/Card]. On my turn I was able to [Card]Thoughtseize[/Card] the [Card]Slaughter Games[/Card], but I was fairly certain he had a second copy. So I passed the turn and my Jace died to Niv and he [Card]Bring to Light[/Card]s for [Card]Slaughter games[/Card] on [Card]Inverter of Truth[/Card] and I go onto lose the game. I couldn’t help but feel like I threw this game away and now game three was for all the marbles. Game three he got stuck on lands and I pulled super far ahead and won by milling him out with [Card]Jace, Telepath Unbound[/Card]’s ultimate.

Eli, Edgar, and I all advanced to Day Two! So the SCG Philadelphia dream was dead, but we all had our eyes set on broader horizons. Afterwards a bunch of us went out to a lovely dinner at the Arrogant Butcher, where we would go on to runback the following day.

That’s how my day ended. From no hope to win, to a Jace ultimate and a birth in day two. But as you know now, my work wasn’t done there. I went to bed with bigger goals in mind than jumping on a last minute flight to Philadelphia.

The story of Day 2 of Players Tour Phoenix, coming soon.