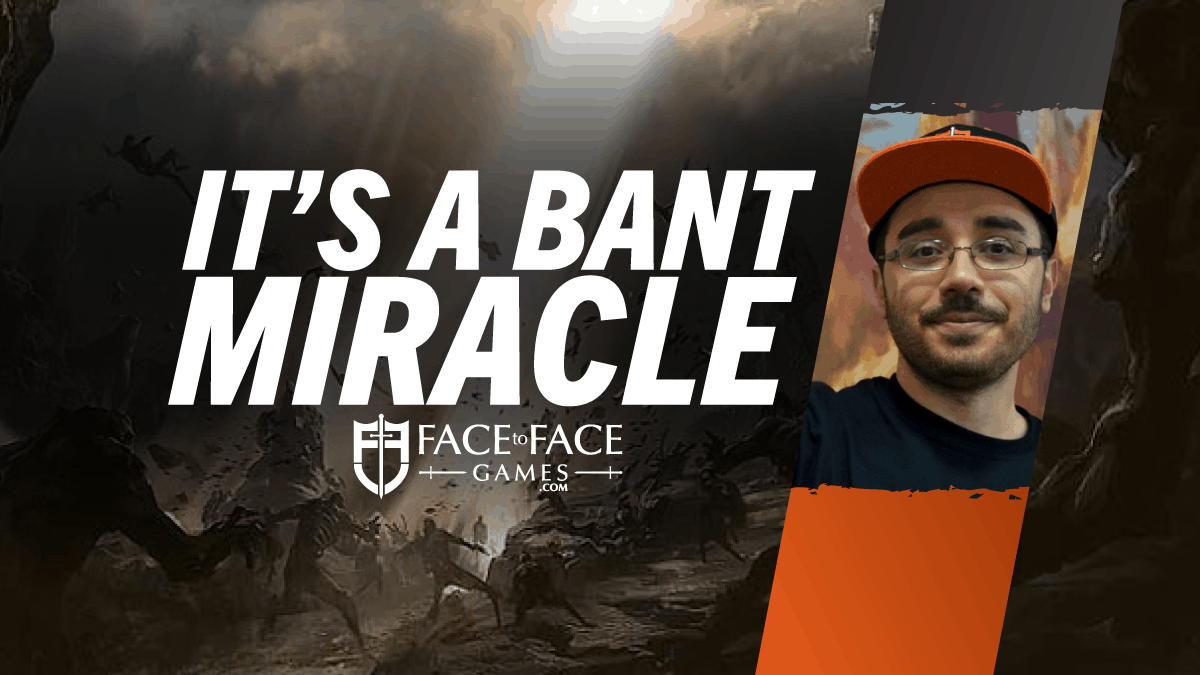 In the past few months I’ve taken just two losses across four separate events with my Legacy deck. Tier 1 doesn’t even quite describe just how good Bant Miracles is right now. By the end of this article you’ll either be convinced enough to play it or change your deck enough to beat it.

Let me walk you through the Bant Miracles deck I played to dominate four separate Legacy 2K’s. Here’s the list:

The first thing that stood out to me about this deck was it’s flexibility. Legacy is a format rich in diversity where players play the deck they can afford or prefer, often above what they feel is strongest. Old Miracles lists would frequently lose to a turn-one [Card]Chalice of the Void[/Card]. Now we have Oko to breathe new life to our game state. I’m going to walk you through a Tournament Report from my event in Late January.

I faced off vs Elves. Game one they had a normal first couple turns with some mana dorks while I just played lands. On turn three they had double [Card]Glimpse of Nature[/Card] that I was “forced” to force twice. This left me with very little action. They played five power worth of creatures and began attacking me.

I was able to play an Oko and gain life to offset most of the damage. The plan was that I would bide my time until I could dig to a [Card]Terminus[/Card]. After playing five [Card]Ponder[/Card]s and three [Card]Brainstorm[/Card]s and not seeing one I finally succumbed to damages. Game 2 my opponent resolved two [Card]Natural Order[/Card]s, but a well setup [Card]Terminus[/Card] still captured the game for me. Game three my opponent was able to combo kill me by turn four with a [Card]Thoughtseize[/Card] and through a Swords and a Force. Not off to a great start for a six round event.

This time I was up against Burn. Legacy Burn isn’t nearly as good as Modern Burn strangely enough. My opponent led off with a suspended Rift Bolt and I had a turn three Oko. That’s really all I need to say there. Game 2 started the same way and it was clear why Oko is already banned in three formats.

My opponent was playing the new Temur Lands list this round. For those unfamiliar they basically play Oko in a Lands shell. Game 1 opponent mulligan’d to five cards and I had the [Card]Force of Negation[/Card] to exile their [Card]Life from the Loam[/Card]. My Oko was able to trump their Oko with the aid of my removal spells. Game 2 my opponent didn’t have colored mana sources and once I was able to get past their two copies of [Card]Rishadan Port[/Card]s, Oko again put the game away.

This is the round I found out how good of a matchup Dimir Shadow is for Miracles. Death’s Shadow doesn’t want to gain life and Swords to Plowshares gives them a lot of it. My opponent played very well and deliberately, but my whole deck was geared to poop on their game plan. Planeswalkers were again the win condition and proved quite unfair.

It was at this point I knew I had a win and in next round. Since one more win would let me draw into the Top 8. My thoughts often wander to what I need to watch out for and improve in these circumstances. I knew I had one loss to a strong start from my opponent, but more from me not being able to fully put up much resistance. Considering ways to increase my starts like Carpet of Flowers. Also good functional cards to help utilize resources on while finding appropriate resources for the game state like Narset, Parter of Veils came to mind. These would all serve to function for another day however.

I finally got to play a mirror match. I was very concerned about going to time, but luckily, we both played fast and efficiently. My opponent resolved an Oko and a Teferi before I resolved any spells and I felt quite disadvantaged. Luckily, they were not able to close the game quickly. Once I had enough mana, I used a proactive [Card]Veil of Summer[/Card] (because of Tef3) to ensure I could resolve a [Card]Monastery Mentor[/Card]. Then I rattled off a few Astrolabes, [Card]Ponder[/Card]s and [Card]Brainstorm[/Card]s to make creatures.

My opponent had a couple [Card]Entreat the Angels[/Card] tokens and tried to fight off the Mentor. A couple [Card]Swords to Plowshares[/Card] later and their planeswalkers were off the table. It cost me all my Mentor tokens and the Mentor itself was removed by an opposing Swords. From parity, I had an Oko versus my opponents nothing and that was all she wrote for Game 1. Game 2 my opponent couldn’t answer an early Mentor and it ran away with the game very quickly. Mentor was definitely the MVP of the matchup.

I got the pair down unfortunately and couldn’t draw into the Top 8. Luckily my opponent was on Burn and I found the matchup to be quite favourable the first go around. Managing my life total with Oko and ensuring I wasn’t in reach of an un-counterable deal four damage spell was all that was needed. My opponent not being able to utilize an aggro strategy with creatures thanks to my removal spells proved important. This win clinched me second seed going into the Top 8 and allowed me to be on the play. Of course, that came in handy for Legacy.

I hadn’t played against Delver yet and that was strange given that Delver used to be the most popular deck in the format. [Card]Brazen Borrower[/Card] surprisingly gave me a tough run for my money and cost me the first game. I had stabilized, but at a low life total and a top-decked [Card]Lightning Bolt[/Card] finished me off. Games two and three went very favourably as my opponent was forced to mulligan and had hands that didn’t materialize. I took the approach of using excess [Card]Pyroblast[/Card]s on their [Card]Brainstorm[/Card]s and my opponent revealed their hand of four lands with four on the table before conceding.

Up against Bryant Cook, someone whose renowned for being a Storm aficionado. I was expecting a standard Ant list, but he was running [Card]Mox Opal[/Card]s and [Card]Wishclaw Talisman[/Card]s. I believe replacing [Card]Thoughtseize[/Card]/[Card]Duress[/Card] slots with [Card]Veil of Summer[/Card]s as well. This made my own [Card]Veil of Summer[/Card]s less efficient and effective.

I spent the first five turns of game one bluffing a [Card]Veil of Summer[/Card] with an obvious [Card]Tropical Island[/Card] up, but of course that was ineffectual as I learned afterwards. Having drawn multiple [Card]Force of Will[/Card]s and a Negation plus a couple [Card]Snapcaster Mage[/Card]s put this win in the books for me. Game 2 my opponent had to mulligan and kept a double [Card]Lotus Petal[/Card] plus [Card]Mox Opal[/Card] hand. I believe this crippled his hand because he couldn’t use a [Card]Lotus Petal[/Card] without turning off Metalcraft. My hand was crafted full of counter-magic and my opponent attempted an [Card]Empty the Warrens[/Card] for ten goblins. I used an Oko and a Jace to deal with the tokens and stabilize. Once that happened my opponent never recovered.

My opponent was my friend I drove up with and the person I lent a deck to. We split the prize and chose to drive home early to get through the snow storm more safely. My friend didn’t mind me taking the Trophy and the glory as a thank you for loaning him the deck. Incase anyone is interested I built him the Blue Green Omni-Tell deck that has popped up all over the MTGO scene. He actually went undefeated with the deck and achieved his highest finish to date (big congratulatory shout out to Christopher Seager!).

I usually put a paragraph of things I would consider changing at this point in the article. Honestly the deck is very solid. I would only look to the sideboard for considering a couple slots that might combat Lands and or Omni-Tell a little better as those decks have both seen a rise in popularity. [Card]Containment Priest[/Card] might be better served as [Card]Deafening Silence[/Card] for the combo matchups. Maybe as a two-of. Something like From the Ashes could be a useful way to combat the lands matchup, but also maybe just [Card]Blood Moon[/Card] is better and more flexible.

Legacy has been through a lot of changes over the years. It’s in a fun place right now where every deck feels like it has the right tools to combat any other deck. No one is pigeonholed into playing a singularly powerful deck because of excessive format domination. Despite the fact that I have been dominating with Miracles of late. I think each deck is adaptable to combat this strategy if they so choose.

Hopefully everyone likes the deck, Check out my stream at Twitch.Tv/EliKassis three days a week and also to see plenty of recorded videos anytime. Subscribers also gain access to my Discord channel with access to important things like sideboard guides. If anyone picks up the deck and has any cool idea’s feel free to tweet at me and discuss it anytime!