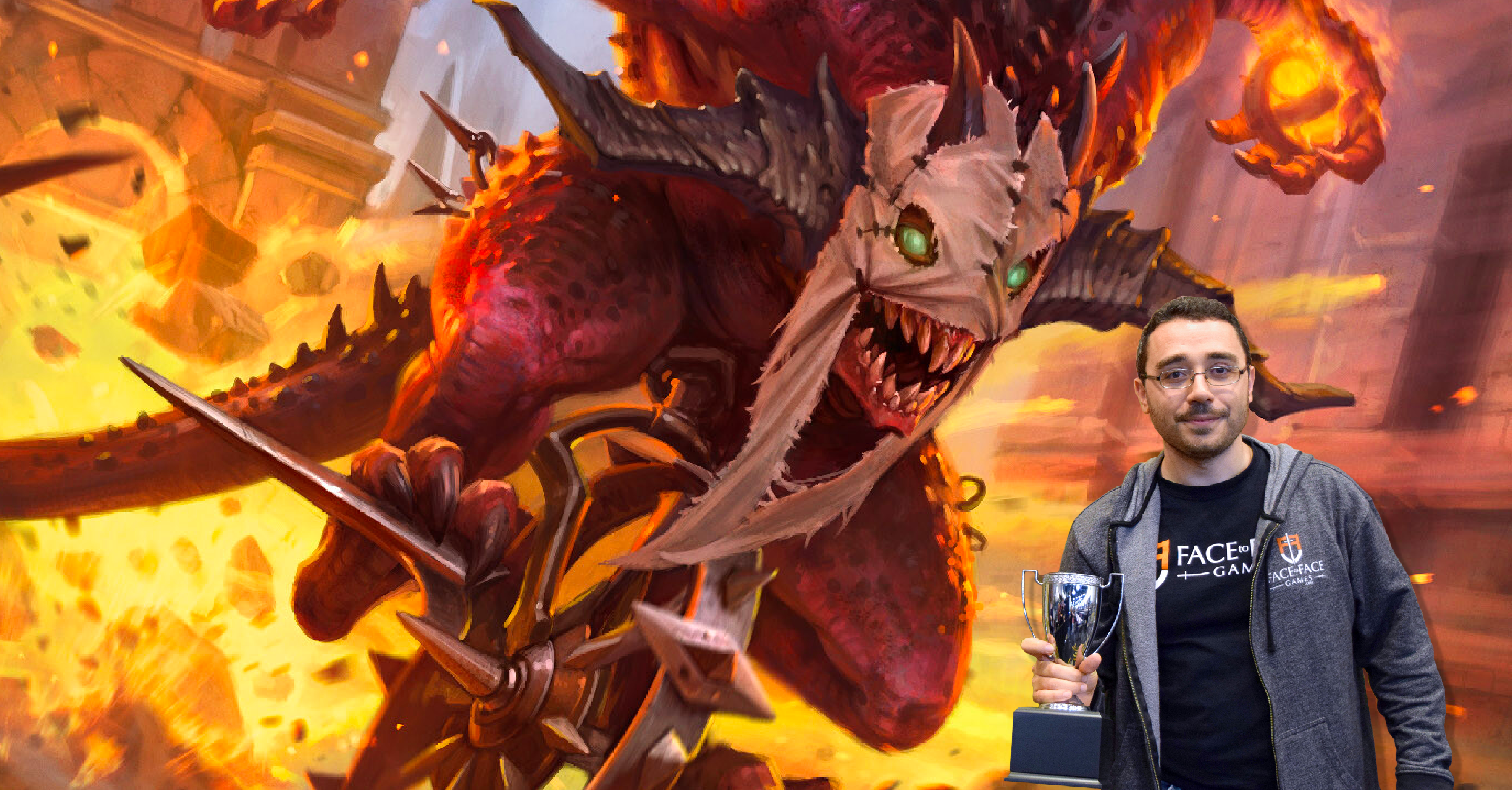 Jund Sacrifice has been around for a while of course. We saw it win the Mythic Invitational IIV in the hands of Piotr Glogowski better known as Kanister. Reid Duke is ever the Jund Afficionado in all formats and he has also written a lot about the deck.

Since Companions hit the scene the deck has taken on a new evolution. Strangely it hasn’t been contorted to fit a companion into the mix. It’s powerful enough to take on decks with an extra card surprisingly. What we’ve seen is a push to going under, but then over the top. Let me explain a bit further.

The old iterations of Jund Sacrifice would use Korvold, Fae Cursed King to obtain a large amount of card advantage fast. Then it would use Casualities of War to decimate the opponent’s side of the board. With the rise of Jeskai Lukka and cards like Elspeth Conquers Death (ECD), we now see more of a go under plan in terms of working around the clause of ECD that it can only target permanents with an average converted mana cast of three or more. 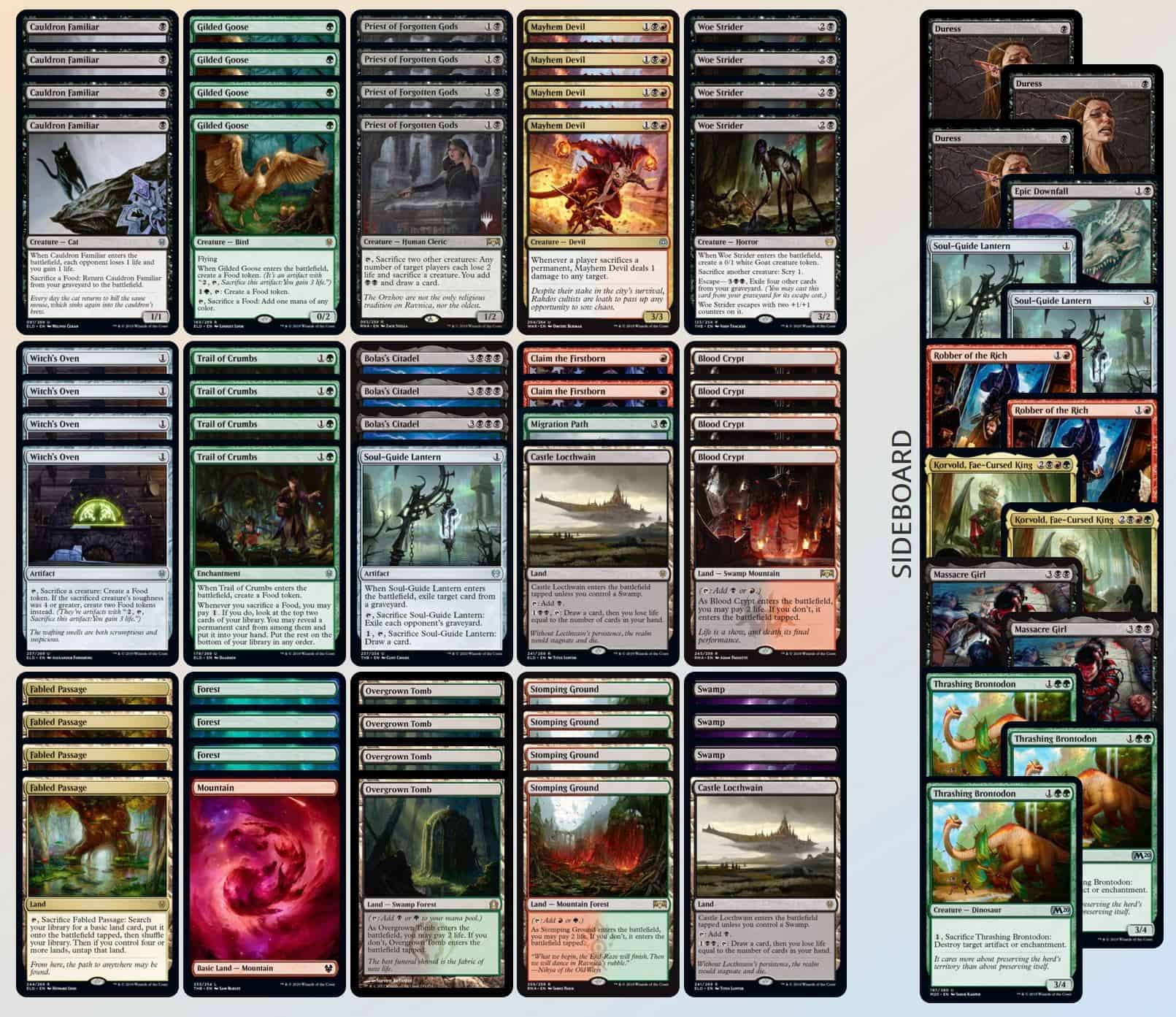 Bolas’s Citadel is the piece of this deck that’s new from past iterations. It comes down and with the Scry 1 ability on Woe Strider or by using Trail of Crumbs the deck can be manipulated to put down a large amount of permanents at the cost of not that much life. Once a Mayhem Devil hits the board and you can activate Citadel, you’ve likely won because that’s 20 damage.

There are a few flex spots to the deck so that a player can customize it however they so choose. You’ll probably wonder about my main deck choice of a singleton Soul-Guide Lantern. I wanted it in the sideboard, but I also wanted every other card in the sideboard. So, I fit the one that cycles and can sometimes be really powerful into the main deck.

I decided to play a 25th land where others are playing 24. I generally prefer to have excess mana as opposed to the opposite and side on the higher side of things typically. Most stock lists however do not play a 2nd Castle Locthwain.

The key elements for beating Lukka “AKA the boogeyman of Standard” is utilizing Trail of Crumbs to assemble the combo. It’s important to not let them also combo and steal all our lands before we can do so. Applying pressure in the early turns is important for this reason as well as boarding into multiple duress.

For the more aggressive opponents’ decks Citadel can often come too late and too high of a price. The sideboard strategy of bringing in Korvold as a throwback to versions of old and paired with Massacre Girl to sweep boards is a fun alternative. I personally like to keep at least one copy of Citadel in for almost any matchup.

My personal preference on Thrashing Brontodon is it’s better than Cindervines because the body can play a dual role. ¾ is basically a house against Obosh decks and can also deal with Grafdiggers Cage if they bring it in. Robber of the Rich is essential copies five and six of Trail of Crumbs for the Lukka Matchup and also other control variants.

It’s important to get your reps in with any deck, but this deck in particular can be quite important. I would also suggest that anyone interested in the deck tries it out online before attempting it in paper as well. The reason is there are one billion different interactions and triggers that are important to note. If an opponent has a Saga out on two for instance and you have a Mayhem Devil, you can utilize its going up to three sacrifice to finish off a Teferi planeswalker that’s on one loyalty.

Using Trail of Crumbs you want to maximize your ability to sacrifice food without paying the cost. Either by using Gilded Goose or by bringing back Cauldron Familiar. Do not forget that Cauldron Familiar can be used to Sacrifice multiple food with only one return from the dead if you so choose. Although if you have Woe Strider out you are better off returning it and getting to Scry some more.

Maintaining a high life total is important for maximizing a Citadel draw in later turns. Some turns you’ll want to dig for your win condition by setting up multiple activations of Trail of Crumbs. Other games you’ll just play Turn One Cat, Turn Two Double Oven, Turn Three Mayhem Devil, and if the opponent can’t meaningfully disrupt these cards. You’ll have lethal damage on Turn Four with no other cards needed.

There’s of course a lot more you’ll continue to discover as you play the deck more and more. However, that’s all for now, but be sure and check back next week for more on the Modern meta game. Modern is shifting fast we can stay on top of it together. Thanks for reading as always and If you’re hungry for more, check out my stream or Vods on Twitch.com/EliKassis.