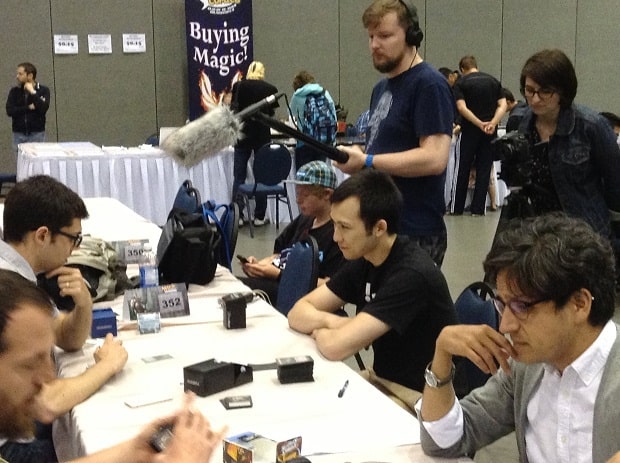 I haven’t written an article in a very long time; not that I wrote many articles to begin with. Writing is something that you should enjoy, something that you can be proud of once it finishes – and I didn’t feel like that was happening with my work. Add that to the fact that there are endless websites with endless articles covering the endless formats and strategies, and you have a recipe for me not wanting to write. Despite all that, there is something strangely comforting and therapeutic about putting pen to paper, (or fingers to keyboard). And this time, this time I feel like I have something other than the dime a dozen strategy article. This article will be about my experience with streaming.

Before we get into that let’s first cover some background information about who I am; because most of you probably don’t know. My name is Kenji Egashira, heir to the throne of Slyther…err, that’s not right. I am just Kenji, casual 24 year old college graduate who doesn’t really know what he is doing with life. Let us rewind a little bit, back to when I was about ten years old. I do not remember the exact circumstances, but I know I was at an extended family gathering, (the big asian kind). My older cousin, Daniel, was playing with some strange cards. Being the inquisitive young child, I was immediately intrigued by their awesomely strange artwork and captivating text. Every time we would hang out after that, I was always drawn to the card game that he was playing, eventually learning how to play and starting my own collection. It was at that point that I became obsessed with the game.

Fast forward seven years, during the summer before my first year of college. I was introduced to an online way of playing my favorite card game. Sign. Me. Up. While I was working a temp job, all my time was spent grinding 4-3-2-2 queues. I know, I know, 4-3-2-2’s are terrible. I was young and dumb, what can I say. Any and all paychecks earned that summer went straight into Magic Online. The next four years were a blur. Between studying, partying, and playing Magic – my time was ‘well’ used. Summer of 2011 rolls around and I received my undergraduate degree in Anthropology/Sociology from Washington State University (Go Cougs!). After graduating from college I didn’t really know what to do. While the courses I studied in college were interesting and gave me perspectives that I did not have before, I realized they were also subjects that I did not want to pursue much further. I started the dreaded ‘job hunt’.

The first job I had after receiving my degree was at my local YMCA. Technically I was an ‘associate teacher’. In reality, a glorified babysitter. Don’t get me wrong my experience working at the Y was great, as I am especially good with children. It was while I was working at the YMCA that I went to my first large event, Grand Prix Montreal in the winter of 2011. I had the fortune of hanging out with multiple people from Team ManaDeprived, and I would not trade the experience for the world. While I started off strong at the GP, which was sealed, I lost the last two rounds to finish at a disappointing 6-3. I did tilt after the event, going into “Dark Kenji” mode, but I still had a blast and have since been to other Canadian Grand Prixs.

Anyways, after having worked at the Y for close to a year, I simply realized I could not do that for any extended period of time. I started looking for a job once again. It was at this point, close to the beginning of the 2012 year, that I began streaming on twitch.tv. During this intermediate phase I was casually going to FNM’s and other local events, but nothing beyond that. The job search was not going well, but my current roommate told me that he could put in the good word for me at the local grocery store he managed at. I took the job, expecting myself to keep searching for something that I would want to do more long-term. Foolishly, I didn’t pursue other job avenues after getting hired at the store and I ended up cashiering for quite a while. All the while I was streaming quite infrequently, maybe a few times a week, and even then I was simply doing it because it was fun.

Eventually I was moved to night crew at the store, which put my hours at 11:00 pm until 7:30 am. Working graveyard was not something fun. The job was physically demanding, and I felt like I did not have any social life. This is where things became interesting. It was soon after joining the night crew that I moved out of my parents’s place and decided that I would try streaming every single day for a year. I had watched other streams where people had committed the time and effort to stream every day, and I figured that with my odd hours I could do it as well. For most of 2013 I was working between 11:00 pm to 7:30 am, sleeping until 3:00 pm, and streaming until work. Rinse and repeat. It was demanding, both physically and mentally, but I stuck with it and found a routine that worked for me. I was lucky enough to produce a ‘show’ that people found entertaining and, perhaps, informative. As the year progressed so did the growth of my viewer base. After some time I was able to partner with Twitch, thereby providing me some form of additional income. I began to spend more time creating a more polished product, and eventually was able to apply, and get accepted into, the subscriber program. That leads us to where we are now.

As I write this article I am closing in on day 300 of my one year livestream challenge. For nearly 300 consecutive days I have played Magic: The Gathering, (and a few other games), while broadcasting live to hundreds or thousands of people. There have been days where I ‘cheated’ and carried over into midnight of the next day, but I feel pretty confident in saying that I have done a decent job thus far. Because of the extreme growth of my stream, and the various opportunities that presented themselves as a result, I decided to quit work at the grocery store and pursue streaming full-time. I may not be making very much money, but I am doing something that I love. The stream has evolved from a fun, casual pastime, to something beyond all of my expectations.

The problem is I am not sure where to go from here. The last 300 days have been a blur of fun and excitement, but day 365 is just around the corner. I would like for this to be something lucrative enough to continue doing, but reality sets in and I know that I should look for a ‘grown-up job’. Twitch does pay a decent amount between the ads and subscriber fees, and sponsors and donations help tremendously, but these sources of income are fickle and can change at a moment’s notice.

The thing that people need to realize, and perhaps what I realized too late, is that this is a show. I imagine myself the creator of this show, just like any television series, constantly trying to produce new entertainment. Luckily, Magic has a way of keeping things lively, especially when you play limited. For the moment I feel like the show has not gotten too stagnant or repetitive, but I do feel like I need to change things around. I guess what I am trying to say is that I am not sure where I want to go with this. Do I continue to pursue streaming as a full-time venture? Do I stop streaming once the year ends? Or do I just stream casually every once in a while? I honestly do not know. I can tell you this though; I will continue to play Magic.

Magic has been my hobby, my passion, my obsession, for much of my life. Have I sacrificed things for it? Absolutely, but I have also gained more than I could have ever hoped for, and streaming has only been an extension of this. While I might not know what lies ahead, I can say with certainty that the journey has been an amazing experience. Here is to hoping that the last leg of my one year challenge can continue to provide me, and the viewers, with the enjoyment that it has provided since the beginning.