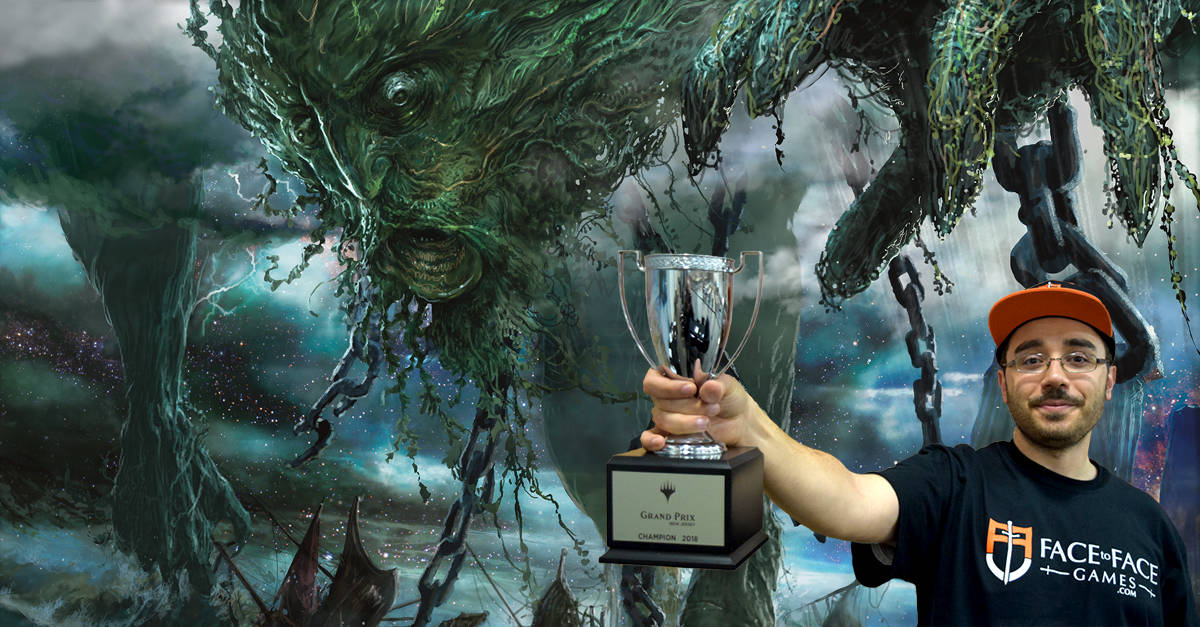 Oh boy, do I have something special in store for us today. Ever wanted to combine the power of Scapeshift with the raw power of Amulet? Yeah me neither, but I did it anyway! To my surprise it revealed the ability to kill on turn three somewhat consistently. With powerful new cards like Oko… errr I mean Uro! Fueling our plan A, but also acting as our plan B is extra spicy.

Let me put up or shut up and then we can talk about it after.

Beginning with the fact that I am playing 30 lands! Holy Moley that’s a lotta mana. With Tribe Scout, Uro, Explore, and Dryad ramping us into Scapeshift. We certainly don’t want to miss a land drop. The addition of Jace, the Mind Sculptor is one of the ways to stem the tides of flooding. In addition three of our lands have cycling which can form another combo with Wrenn and Six to be a draw engine.

Didn’t I mention a turn three kill? It’s actually quite simple. Turn one Scout, Turn two Dryad, Turn three Scapeshift with six lands out. Grab two Valakut, the Molten Pinnacle and it triggers six times per copy. That’s a whopping 36 damage on turn three! You may notice that Valakut doesn’t do anything in this deck without Dryad. You’d be absolutely correct. There are two copies of Bring to Light to help find Dryad. You can also go with Plan C: ramp a lot of mana, cast Scapeshift for tons of lands including 2 copies of Field of the Dead. If you have made sure you have 7 different land names, you’ll have yourself a nice army to win the following turn. 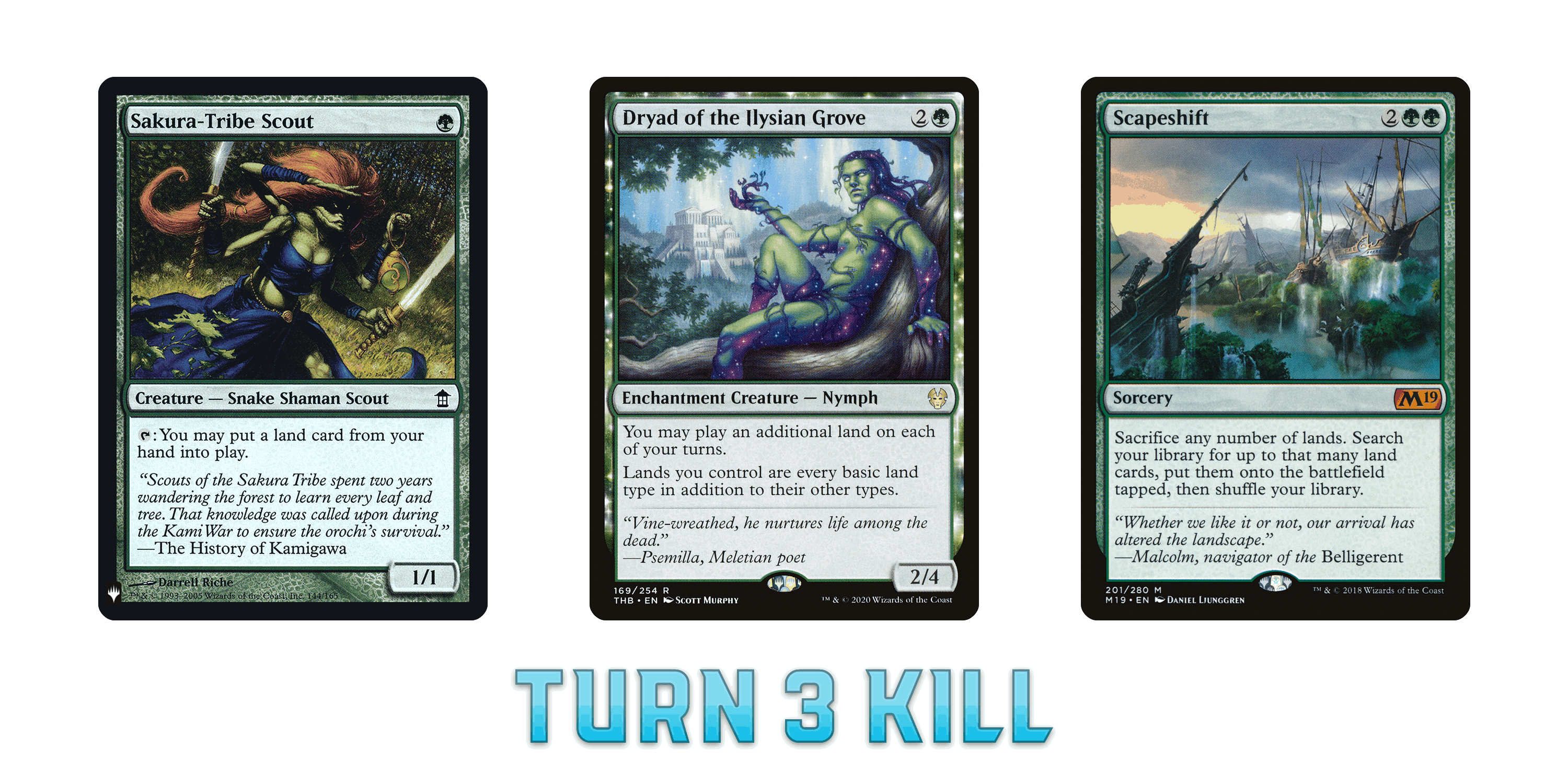 Let’s go over the little micro additions that make up the “Tech” in the deck. We have a Pendelhaven to enhance Sakura-Tribe Scout yes, but also because it’s a forest that comes into play untapped and has a different name for Field of the Dead. Minamo, School at Water’s Edge is an untapped Island under a different name. This is important for playing around Choke and Boil.

Although make a special note here that Boil with Dryad out will get all of our lands. Do whatever you can to avoid that scenario. Originally, I had more blue cards in the deck (Ice-Fang etc) so that I could play Force of Negation. Without the proper number of pitch cards being blue, we are forced to resorting to playing cards like Dispel. Which are kind of awkward to bring in against a deck like Jund, but becoming necessary. Luckily Choke is not a major threat vs this deck, but Boil can be lights out.

Oboro, Palace in the Clouds is another alternative island with a secondary bonus. You may choose to return it to hand and replay it to continue activating the trigger from Field of the Dead or Valakut if you have a dryad in play already. This fact has led me to consider whether I should be playing multiple copies, but it is complicated by the fact that Field of the Dead requires a diversity.

Bojuka Bog has an obvious utility to hinder our opponent’s graveyard during a time of Uro running rampant. We can also cast Scapeshift on four mana and sac only one land to go and get the Bog if necessary. Meaning by turn three we can affect our opponent on another axis.

Castel Vantress is for flood protection and to dig to our win conditions. Also serving to function as an alternative Island. We cannot play too many of these without the risk of having them come into play tapped due to non-Island ownership.

Lastly, the Life from the Loams are meant to act as additional Wrenn and Six’s so that we do not miss our land drops. I am not sold on this slot just yet and mostly want to test to see their effectiveness. It’s possible some of the other utility creatures could be better served here like Ramunap Excavator or Oracle of Mul Days. I especially want to figure out how to jam a few Tireless Trackers into the deck. I am sure I’ll be testing out all the alternatives soon enough.

As for the sideboard I started my thought process off with what am I weak to? I came up with faster combo decks like Neoform and Infect. I determined Boil players of course, but also decks that have lots of counter-magic (Dylan D’s Temur Urza for example). Veil of Summer is the grossly overpowered sideboard card of choice nowadays. It solves the Jund dilemma as well as decks with lots of counter-magic. That paired with Dispel are where I want to be for those post board matchups.

To combat infect a mix of Lightning Bolt, Dispel, and Thoughtseize are likely enough to stay alive until we can clench victory first. This has yet to be tested of course. For decks like Burn we lose Thoughtseize but pickup Obstinate Baloth. Obstinate Baloth is a powerhouse against Jund as well with the alternate casting ability being a thorn in the side of Kolaghan’s Command, Liliana of the Veil, and now Kroxa. Some are even playing Lightning Skelemental, so it’s a pretty savage way to get around these decks.

Anger of the Gods will always be there whenever available for answering Tribal Decks. The exile clause is extremely important when facing Dredge or Crabvine as well. The fact that it deals exactly three damage is nice for evading killing your own Dryad of the Ilysian Grove. Before you have the thought of making cuts to this list like removing black. Make sure you take into account that a fourth color is needed to make Bring to Light function as a Scapeshift. It is also nice to have Bring to Light be able to grab an Obstinate Baloth every now and again.

Cavern of Souls was briefly considered but this deck lacks the Primeval Titan payoff at the top of the curve to substantiate having the colorless source of mana. While there will be times resolving a Dryad would be useful, it’s likely not enough for the times it will hinder us by not allowing us to cast a Uro from the yard. The most fun you’ll have is beginning a game with an opponent thinking you’re on Amulet. Obviously they’ll start to question that as you play a Wrenn and Six or a Uro. Then when you slam Scapeshift the jaw drops.

Now post-board games can be quite difficult. You’ll have to deal with an array of problem cards like Blood Moon and Ashiok. The only catch-all card is Beast Within. I will certainly retool the sideboard to include this card once people start to see it more. Other notable one-sided answers with some resilience and versatility are; Fry, Magmatic Sinkhole, Force of Vigor, Nature’s Claim, Brazen Borrower, Reclamation Sage, and Repeal. Until we know what our metagame consists of, the sideboard is spread for the main meta of over a month ago. When the contagion is over and a new set has been integrated, I guess we will see how things change.

That’s all for now, but check back each week as I bring you more ideas to toy around with. Only here at FaceToFaceGames.com the best source for singles on the web. If you can’t get enough of my content be sure and give me a follow on Twitch at Twitch.Tv/EliKassis. I have a subscriber-only Discord as well for those who want 24/7 access. There’s also 50+ decklists on there, over a dozen sideboard guides, and a community of hundreds of fellow Modern enthusiasts.