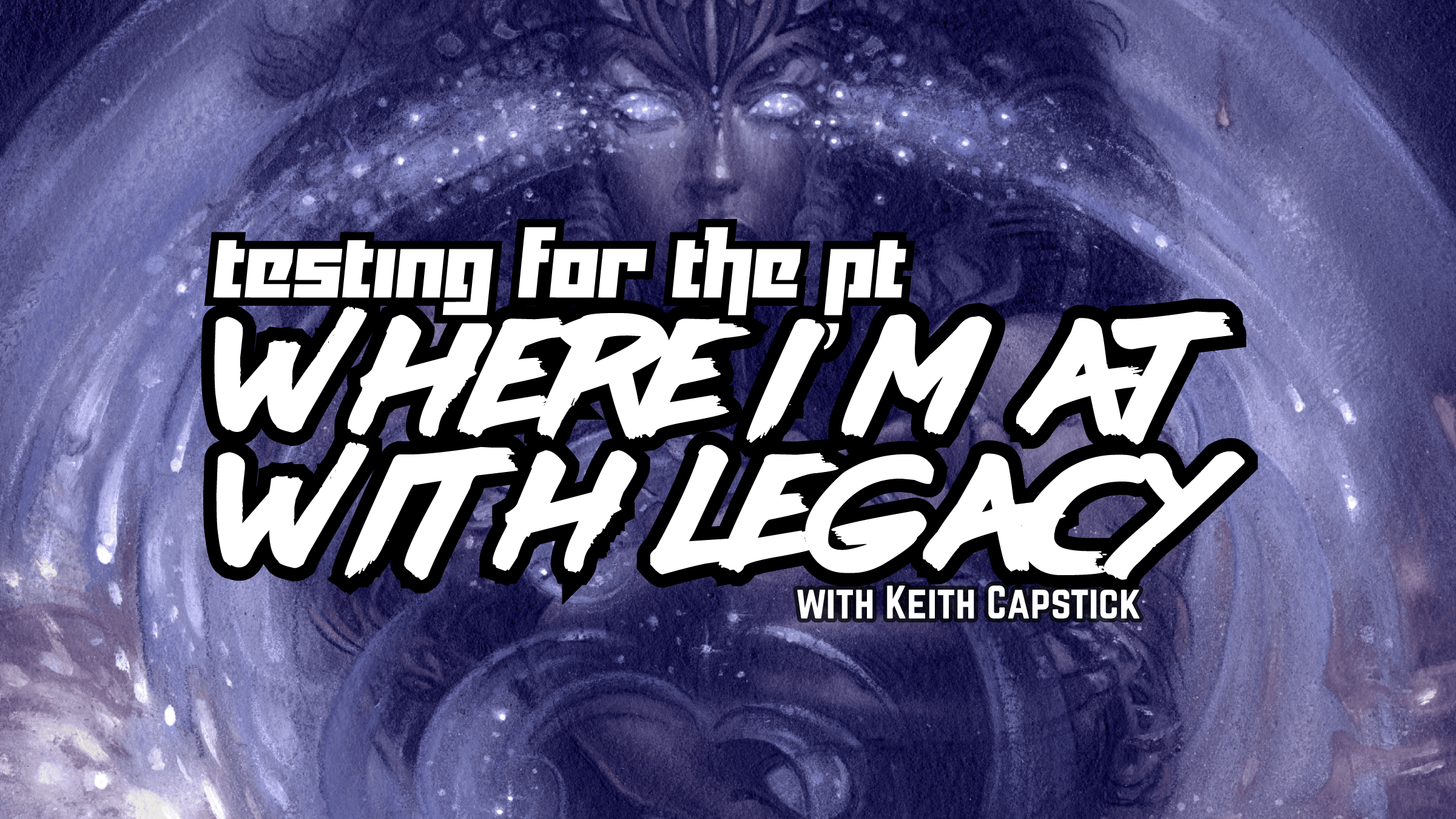 In my short time being surrounded by Magic players good enough to continually attend the Pro Tour I’ve enjoyed nothing more than helping them prepare.

There’s just something so cool about attacking a format with a real goal in mind, and it’s really freeing to be helping somebody else because all your wacky ideas have merit but aren’t going to decide your own fate.

Now, for Pro Tour 25 I spent about a month in Google Hangouts calls with Toronto-area player and Face to Face Games Ultimate Showdown champion Edgar Magalhaes trying to help him prepare for Legacy. Before the banning of [Card]Deathrite[/Card] Shaman and [Card]Gitaxian Probe[/Card] Edgar and I worked on the Four-Colour Leovold deck together for about a year. But, without the deck’s key one-drop, it was time to head back to the drawing board.

As you probably know, Day 1 of the Pro Tour has just ended, which was something I wanted to wait for before publishing my ideas about the format. I figured there’s just no way I was right about everything, and by allowing you to take a look at the Pro Tour metagame before hearing from me about my testing, we’d have a good back-drop for our conversation about the format.

Let’s take a look at the Legacy metagame:

For me the only real surprise on this list is Eldrazi Stompy. From testing over the last few weeks we more or less determined that there were a few “definites” about the format and a lot of question marks:

Here are some other “core commandments” that I was trying to work off of:

This is what I was working off of heading into the Pro Tour. A couple weeks back I played the StarcityGames team Open in Philadelphia in the Legacy seat. I played a Grixis deck with [Card]Baleful Strix[/Card] that I hated by the end of the tournament, but going in I couldn’t find any fair deck that I legitimately liked more and I wasn’t comfortable piloting Sneak. Here’s roughly the maindeck I played:

My fundamental feelings about the deck after playing it for nine rounds, over which I went 6-3 in my matches, was just that it wasn’t powerful and had weaknesses to “problem permanents.” I couldn’t interact with graveyards anymore, couldn’t speed by anyone with mana-acceleration and couldn’t lock them down with [Card]Leovold, Emissary of Trest[/Card].

With that said, you won’t be shocked to hear that the thing that surprised me the most about the Pro Tour metagame is that Grixis Control was the most popular archetype. Now, I know pro players skew to big blue decks historically, but after my experience I’m taken aback, so I’m excited to see if they succeed with the deck and what their lists look like.

Now that I’ve spoken a little bit about the PT metagame as a whole, I’d like to go through each of the major archetypes and talk about why they’ve risen to the top post-bans. I’ll likely spend a little bit of extra time on the decks I know best, but will try to touch on the pros and cons of everything.

For me, this was the part of testing that I had to work the hardest on. And, if I’m being honest, I didn’t really believe that my conclusions about the decks were true until I saw the Pro Tour metagame.

The traditional Grixis Delver decks lost a lot of their busted ability to generate veolocity. To more or less add text to cards like [Card]Young Pyromancer[/Card], [Card]Gitaxian Probe[/Card] and [Card]Gurmag Angler[/Card] with the sheer efficiency of their game-plan. With this in mind, a lot of players reverted to traditional Temur Delver, but for me, it’s just not powerful enough.

In order to be the combo-predator that Delver is known for, I’m of the opinion that the black discard spells need to be paired with counter-magic. I just never felt like Temur was good ENOUGH against the Sneaks and B/R Reaninmators of the world in order to justify playing the deck. Not to mention its inherent vulnerability to the cards [Card]Terminus[/Card] and [Card]Baleful Strix[/Card]. It’s not enough to just say, “oh well I’ll just get underneath them,” because some of the time this doesn’t happen.

I’ll give full credit to SCG Tour stalwart Daryl Ayers as he was a fan of this archetype from the beginning and in my opinion, Death’s Shadow is the optimal way to build Delver now.

The reason for this isn’t exactly match-up dependent though. Obviously you could just play Grixis Delver with some worse creatures if you just wanted to play both blue and black disruption. For me, the reason to play Death’s Shadow is that you get to go back to that old velocity of Grixis Delver, start “cheating” with your cards and virtually adding text to the other cards in your deck again.

You see, the same way Young Pyromancer added the ability to Gitaxian Probe to make a 1/1, or Probe gave you full information for Cabal Therapy — Death’s Shadow powers up your fetch lands, [Card]Snuff Out[/Card]s and [Card]Street Wraith[/Card]s. When all of these cards that you would more or less want to play in your deck have added upside, you get to do a pretty Grixis Delver-like dance.

Not to mention, with this deck when you counter a key spell you don’t just attack for three — you get em’ dead.

From a testing perspective, this was the deck I expected to be most popular at the Pro Tour. It’s a little awkward because traditionally your Delver match-up has been tough, but if people were going to bring Temur Delver, I think you’re fine.

This deck is just so powerful that playing it a Pro Tour is so appealing. It can win through a lot of hate and has a core game plan that even the most prepared decks can’t always beat. Sneak & Show even got a new tool in [Card]Arcane Artisan[/Card]. An additional way to put fatties into play that dodges a lot of soft counter-magic, [Card]Containment Priest[/Card] and is an additional threat card against [Card]Hymn to Tourach[/Card] decks.

One of the awkward parts about Sneak is the Death & Taxes match-up, which was another deck we thought would be well represented. Now, some people out their sing D&T’s side of the Magic like it’s the bye — I do not think this is true by any means. But it is very awkward to choose a deck like Sneak, only to walk into a tournament hall and know that one of the fair creature match-ups is a close and sometimes unfavourable pairing.

We saw Show and Tell strategy on camera in the first round of the Pro Tour with a very impressive creature plan in the sideboard featuring [Card]Thing in the Ice[/Card]. This isn’t something we ever tried with the archetype, and honestly looked pretty impressive. If the 0/4 can beat Delver — I’m in.

Ahh yes, mono-white creatures in the most powerful constructed format at the Pro Tour, let’s get it!

[Card]Mother of Runes[/Card] and company are honestly in the best place I’ve seen them since I started playing Legacy. [Card]Brightling[/Card] was a massive addition to the deck, and the core strategy itself is just very well-positioned from where I stand. Your Delver match-up is traditionally close but favoured and I already spoke about how you can very much compete against Sneak & Show.

I think when it comes to D&T, one of the things you have to ask yourself is this:
“is [Card]Brainstorm[/Card] just to good not to play?”

I understand that when you read this it may seem like I’m joking. But playing this deck, and then reaching parity with your Delver or Grixis Control opponent only to watch them top-deck [Card]Brainstorm[/Card] or [Card]Ponder[/Card] is just demoralizing. I think if you choose to avoid D&T it’s not because of any particular match-up, but just on power-level reasons alone.

Decks that feature the card Tundra

One night during my testing process for SCG Philly, someone in our Google Hangouts chat told me something I’ll never forget — “friends don’t let friends play Tundra.”

At the time I was pretty thrown off by the comment, and honestly tried to ignore it as best I could. I went to Philly, did fine but not great and promptly sleeved up U/W Miracles to test during a side event on Day 2. That’s when I learned the true meaning of this statement.

All, and I mean all, of these Tundra decks that are trying to play fair Magic are extremely medium and never good enough to bring to a tournament. That’s not to say you can’t win with them, or that they won’t ever win a bunch. But, I believe that your core strategy is just not powerful enough for the format.

You fight only on the stack versus the combo decks which experienced pilots can dance around, your pro-activity starts and ends with Monastery Mentor and your control plan asks you to play some real stinkers to establish control of the game. Legacy is such a powerful format that in order to truly control the game you must establish a reoccurring effect that gives you that control. In these decks that involves a couple copies of [Card]Back to Basics[/Card] and a couple copies of [Card]Counterbalance[/Card]. Two cards that have incredibly polarizing effects match-up to match-up.

You ever draw a [Card]Back to Basics[/Card] Game 1 in the mirror?

Obviously the Pro Tour isn’t over yet, so we’ve got some additional information to gobble up in the coming days. But their are a couple decks I’m immediately interested in with the information we have in front of us.

The first is Lands. With the exception of Sneak & Show the top of the Pro Tour metagame all looks ripe for the picking for this Life from the Loam strategy. This is especially true if Death’s Shadow and Grixis are able to Thoughtseize Sneak further down the totem pole, which will be the case if that’s what happens at the PT.

Another thing you’ll notice about the Pro Tour metagame is that nobody is especially taking advantage of their graveyard. If that trend continues and Surgical Extraction starts dwindling in numbers from players sideboards something like Dredge or other graveyard focused combo decks could be primed for a resurgence.