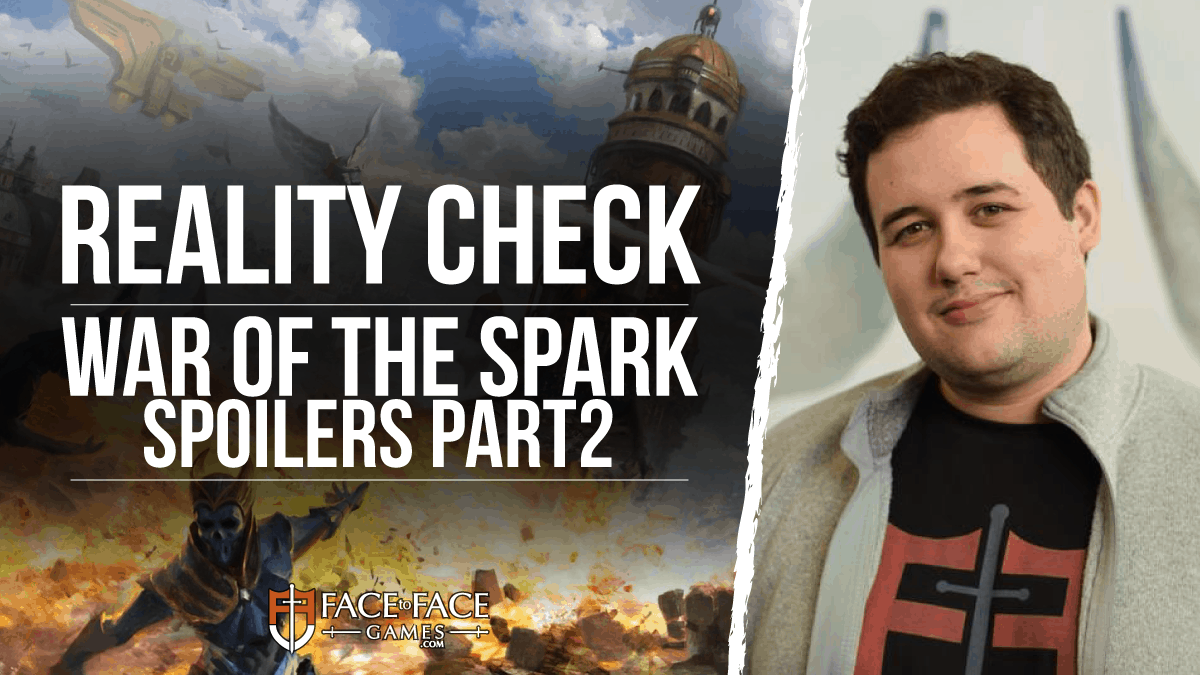 Alright, a week has passed since I last checked in on the spoilers page, and it looks like I have a lot more ground to cover. Fittingly for a set that seems to be an, uh, homage to Avengers: Infinity War, a lot of cards spoiled over the past week are references to historical cards. Be they iconic creatures, throwbacks to old planeswalkers, or spells — but from Hearthstone. I suppose they must know what they’re doing, as products filled to the brim with nostalgia are always successful, be they Kingdom Hearts 3, Ready Player One or any other horrible media property carried to commercial success by the appearance of licensed characters.

Anyways, let’s look at some Chandras and Nissas and Domris and Karns that have identical mana costs and similar abilities to older versions of the same cards. No, I’m not mad. I swear. 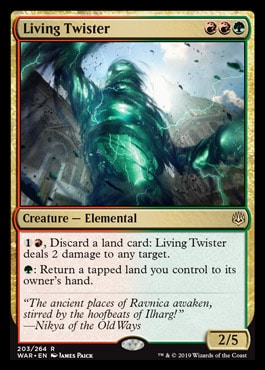 This fellow’s got a lot of toughness for a three-drop, and what’s historically a fairly powerful ability to boot. If you’ve ever had a hankering to turn shocklands into [Card]Shock[/Card]s, Living Twister alongside some Explore creatures might be for you. 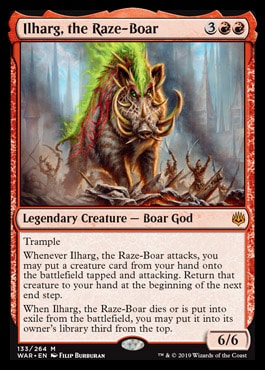 This is a very pushed card that reminds me of [Card]The Scarab God[/Card], only even harder to permanently answer. It’s got big stats, a unique ability that will keep it coming back no matter what and [Card]Through the Breach[/Card] tacked on at the end. Unfortunately for Standard, there are no [Card]Griselbrand[/Card]s for us to play with, but given that the card is perfectly powerful without the trigger, I think I’d be fairly happy with just a [Card]Jadelight Ranger[/Card] or anything else with an enter the battlefield trigger. 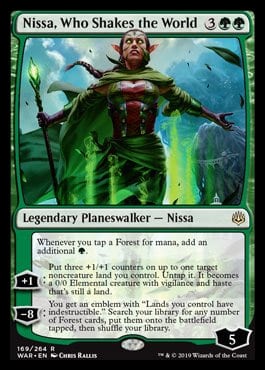 Much like many of the other planeswalkers in this set, this doesn’t look quite as powerful as its predecessors. It’s definitely a throwback to [Card]Nissa, Worldwaker[/Card], my wife, but you might be surprised to find that 3/3s aren’t quite as large as 4/4s. While [Card]Vivien Reid[/Card] will remain a superior choice for Standard decks, it’s clear that this is intended as a ramp spell with upside for Commander. 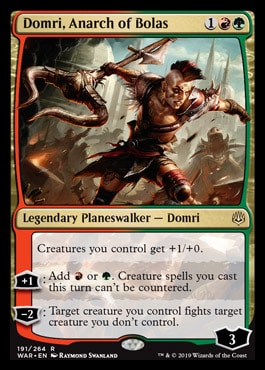 I’m not a huge fan of this card. It’s too hard to generate advantage off of it, while past Domris just required you to have creatures in your deck in order to do so. The static and plus abilities are fairly anemic and, in my opinion, aren’t worth a card that can die off in combat. 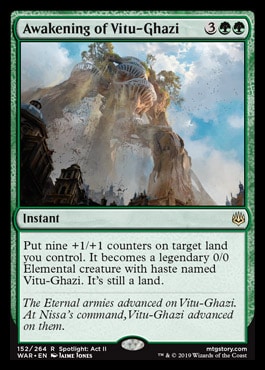 That’s… a lot of power for five mana at instant speed, or with haste at six mana. Fortunately, it doesn’t have trample, but I’m still slack-jawed with awe at how big this creature is. It single-handedly lets you cast a cheap Ghalta. Very impressive, and very playable. 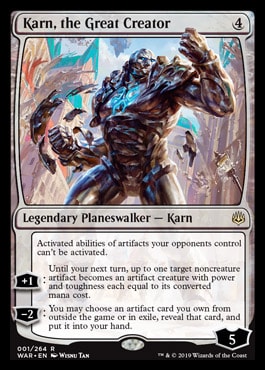 This Karn is a very cool card that explores the design space of an artifact-matters card very well, but I don’t think that Standard has nearly enough toolbox artifacts to justify this card’s inclusion in a tiered deck. However, a one-sided [Card]Null Rod[/Card] that wishes for artifacts out of the board and can protect itself with its plus definitely has a home in Modern, and while I can’t pretend to really know anything about Vintage, my assumption is that this card is messed up in Vintage. 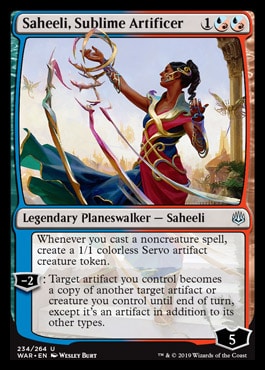 Evaluating this card is certainly a challenge. A [Card]Sai, Master Thopterist[/Card] that triggers off of cantrips and counterspells is definitely powerful. But a Sai that can die in combat, doesn’t draw cards, doesn’t make fliers and still requires artifacts for its other ability to matter, is a much riskier proposition. Regardless, that static ability is outrageous, so there’s probably something here. 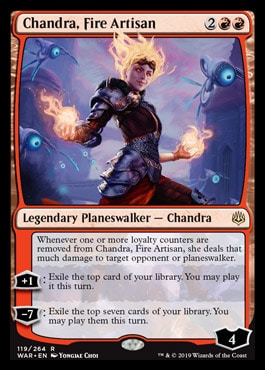 The static ability on this one is cool, in that it incentivizes your opponent to leave it alone, but unfortunately, it doesn’t actually protect itself at all, which is typically something you’d ask of a four-mana planeswalker whose main role is to generate card advantage. While this looks like a budget Torch of Defiance on the surface, I’d go so far as to say that this card is entirely unplayable so long as superior cards like [Card]Karn, Scion of Urza[/Card] exist. 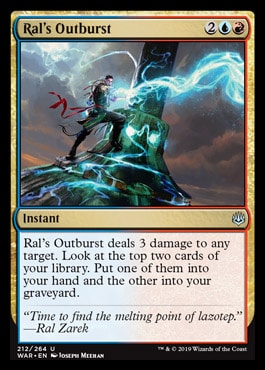 Is [Card]Lightning Bolt[/Card] plus [Card]Sleight of Hand[/Card] a good card at four mana? Probably not in the current Standard, but I’d like it to be. 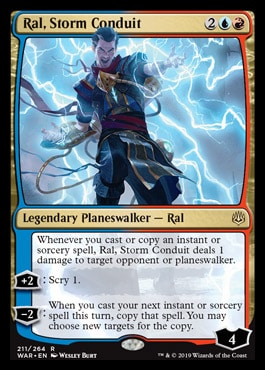 Bad static, bad plus, a minus historically worth two mana? Normally this would be a hard pass, but there’s a nifty game-ending combo with double [Card]Expansion // Explosion[/Card] and a cheap spell like [Card]Opt[/Card]. I honestly doubt that this would be good enough to make this card better than, say, Niv Mizzet as a finisher in an Izzet deck, but I’ve been wrong at least once before, and it could stand to be absolutely broken. 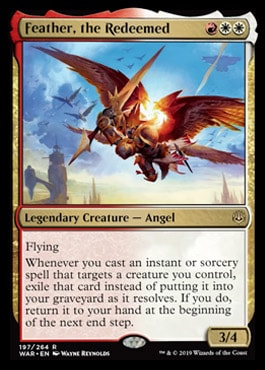 While Feather has a cool ability that screams for Saffron Olive to build around it, I’d bet my meagre net worth on this card being worth little more than its good stat-line. 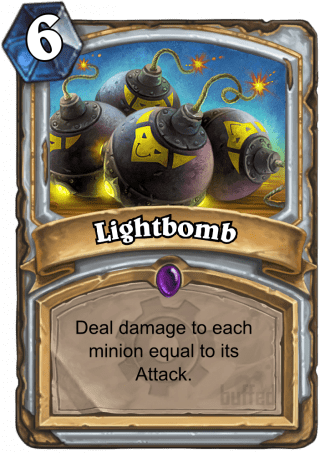 Lightbomb was oddly poor as a wrath in Hearthstone, a game that plays to the board a lot more than Magic, but the budget 2RW mana cost on [Card]Solar Blaze[/Card] could lead it to be quite strong. Ultimately, whether or not this card is good will depend on which creatures are popular in the format. I’m leaning towards a positive here. 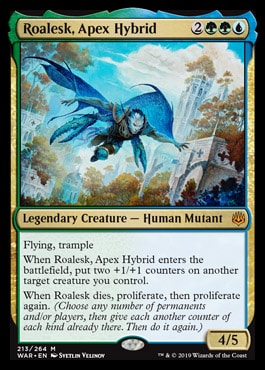 This card is very pushed, and is definitely playable. Whether it’s better than [Card]Vivien Reid[/Card] in the five-drop slot of most green decks will have to be seen, but it’s got huge numbers and a lot of upside on top of that. 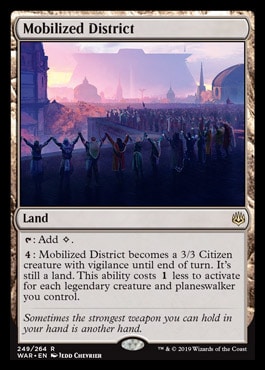 Mobilized District is an awkward and expensive card, but creature lands are almost always playable in some context. Eventually there will be some kind of control deck that desperately wants an effect like this, and the town watch will be there, ready to serve. 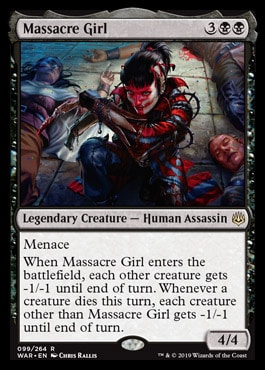 A very cool ability creatively lifted from a Heathstone card in order to induce feelings of nostalgia among players of that game coaxed into playing Magic through Arena. I see what you’re doing here, Wizards, and I like it. Unfortunately, this probably isn’t good enough for Standard, though I wish it was.

Not only do I refuse to learn what an Advokist is, I refuse to play decks that this card would be good in. 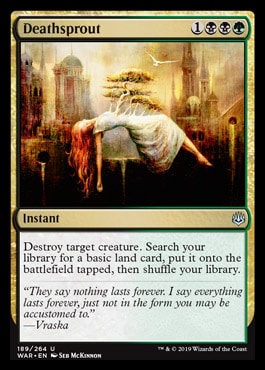 Two-for-ones are always nice, and I’m happy to spend one more mana on a [Card]Murder[/Card] to get a [Card]Rampant Growth[/Card] out of it. The synergy with [Card]Hydroid Krasis[/Card] here is quite solid, though I’m unsure if it’ll actually end up seeing much play. 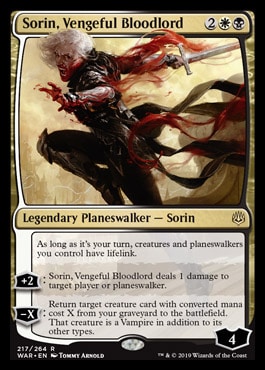 Reanimating small creatures and giving your board Lifelink is alright, but I think this Sorin will need a pretty dedicated Aristocrats-style deck in order to see the light of day. 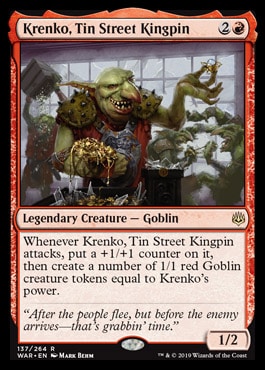 I’m imagining the board meeting that led to the design of this card, featuring Mark Rosewater excitedly shouting about how much players loved [Card]Goblin Rabblemaster[/Card], and one meek intern in the corner, too timid to remind the titans of R&D that they had just printed a Rabblemaster reference a few months ago. This card isn’t even as good as [Card]Legion Warboss[/Card]!

Despite being pushed on rate through its difficult mana cost, I don’t think this card is quite good enough for Constructed play. Its ability is strong, of course, but there are just better alternatives available to a Golgari deck trying to grind out its opponent. 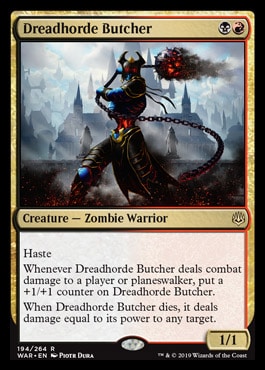 Remember [Card]Slith Firewalker[/Card]? I sure don’t. This card is too far removed from the era of one-power creatures that were unbeatable so long as they connected with a face. Hell, we just had a set with an unblockable Ophidian, and it wasn’t even particularly busted — in Limited. What gives? 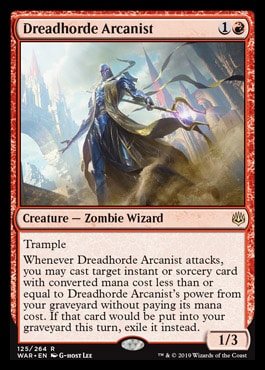 I’ve never met a [Card]Snapcaster Mage[/Card] variant that I didn’t like, but I don’t think there are enough one-mana instants and sorceries in Standard right now to make this card truly shine. It’s entirely possible that this has applications in Legacy, however. 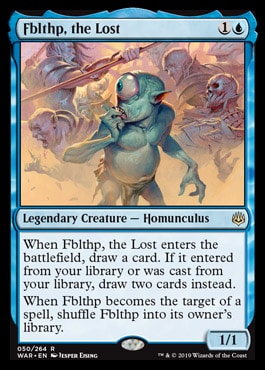 Hell yeah. I love everything about this card. It’s great to pod into with Vannifar, and at worst is just a blue [Card]Elvish Visionary[/Card], notably a card that has seen play. In this house, we stan Fblthp. 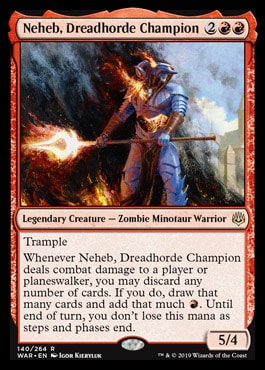 Market research shows that I should include more Commander content in my writing, so as an olive branch to the most important demographic of Magic players, I’m including my review of this card:

This is a card clearly designed for Commander, rather than formats that I’m interested in.

Thanks for reading! Despite my dry sense of humour and propensity to see the worst in everything, I’m quite excited for this set. It looks like there are a lot of powerful cards that should perform well above rate, and if you’ve read any of my past Standard content, you know I’m always foaming at the mouth with excitement to brew up new decks on set release. As usual, send all fan mail and/or vaguely threatening messages to the ol’ Twitter. See you next week!