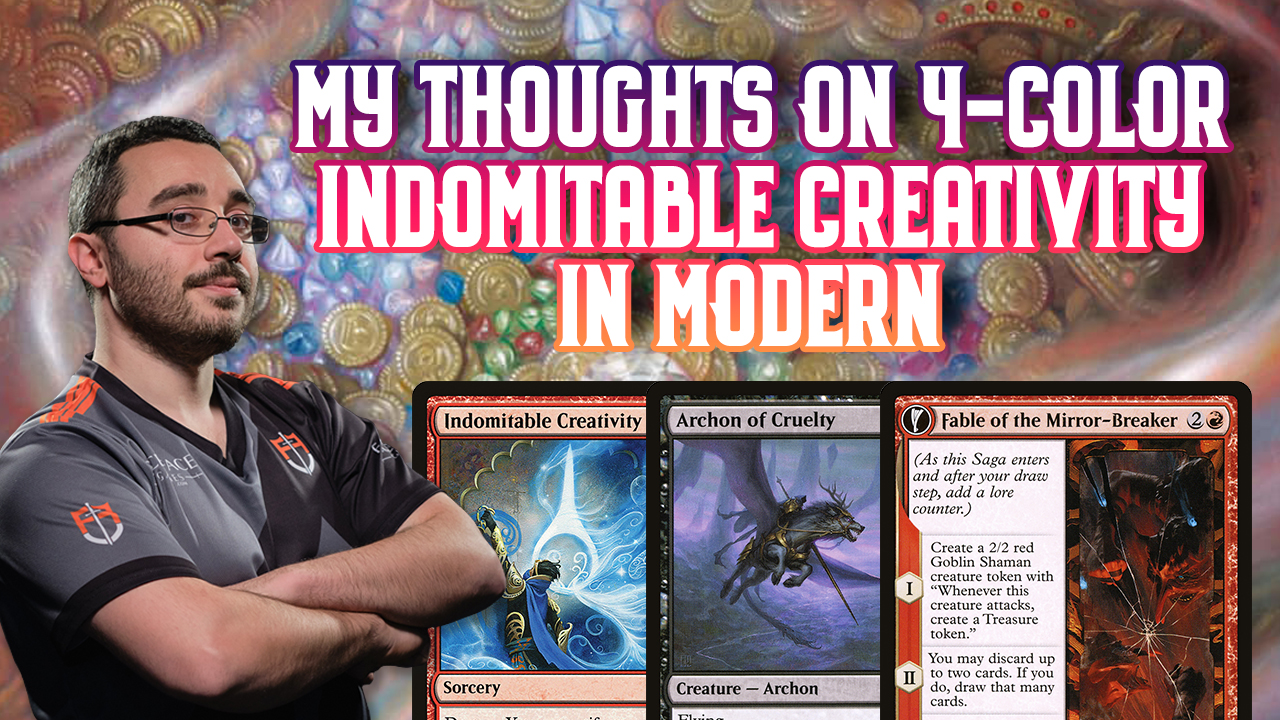 I’ve had this feeling for awhile now that 4-Color Creativity could be a major player in the Modern metagame, albeit its clunkiness. With the printing of Fable of the Mirror-Breaker, I believe this strategy could be a sleeper deck in the format. Although it’s worth noting that right now everyone and their brother is playing some sort of 4c Yorion pile.

3
Fable of the Mirror-Breaker
4
Archon of Cruelty

2
Boseiju, Who Endures
2
Flusterstorm
3
Veil of Summer
1
Dress Down
2
Mystical Dispute
2
Force of Vigor
3
Leyline of the Void

The choice of a fourth color in the deck is varied depending on the list, but if it’s White it’s usually for Teferi, Time Raveler. Now the issue with clunkiness I mentioned before is we want to have Dwarven Mine create a 1/1. This means we need to have three Mountains in play. All the while we need to cast cards from four different colors at early stages of the game. This is the one thing holding the deck back from being a top tier strategy, in my opinion.

Here’s my idea’s of how the deck could evolve. For one, we always center these decks around Blue because they tend to be piloted by Blue-biased players. What are we actually gaining by playing Blue in the list above? It’s a bunch of average mediocre cards really. The Green cards are much more powerful, but in my opinion still not necessarily worth the cost. So, if the deck is now just Rakdos I think we can build something more streamlined. It will lose some points here and there, but overall the mana will be much smoother.

There’re definitely some poor tradeoffs in that Vampire’s Kiss and Strike it Rich don’t create Clue tokens, but to not kill ourselves with shock lands and have a difficult time casting our spells, I don’t think I mind that exchange. What I especially like about this is we are not worried about casting our turn 2, 3, and 4 spells in proper sequence. We can just focus on what we want to do best this turn without it negatively impacting our future plays.

Now to really shift things in a vastly different direction – what if we no longer played a mana base geared towards Dwarven Mine at all? Hear me out, we have Fable of the Mirror-Breaker and Hard Evidence. We could still keep in one copy of Dwarven Mine for when the mana runs hot or if we need additional utility in later games. Instead, we could just have better mana to play the spells we want to play.

I’m going to disappoint you here because I don’t have a deck list for that idea in mind. I’ve conceptualized it only and you already got one free deck idea from me above, but maybe I’ll write about it and include it in a future article if people are interested. I do know I would want it to cooperate better with Teferi, Time Raveler. It would be could to be able to turn one interact with removal, turn two to Explore, turn three to set up protection or play defense, and then explode on turn four. Normally, we would need to take a turn off to let our mana catch up.

These ideas came to me when I was reviewing an old Gruul Creativity brew that was played awhile back. It used Primeval Titan instead of Archons or Emrakuls, utilizing instead Valakut, the Molten Pinnacle as a win condition instead.  This is what eventually became of those lists:

It was easy to imagine that Creativity could exist in straight two-color formats and still have plenty of fighting power. I can already see the benefits of having Green be the supportive color instead of Black, given that Veil of Summer is such a busted card to begin with. Then we get the explosive Explore games where we are combo-ing on turn three instead of turn four. Force of Vigor is obviously a great sideboard card, Wrenn and Six becomes an easy powerful inclusion. There are probably even some good Green token-makers that we can use to feed the combo like Nissa, Voice of Zendikar, that also function well with the heavy land strategy. At that point having Scapeshift as a backup win condition or even just hard casting Titans and winning the old-fashioned way doesn’t sound too bad.

Anyway, I am digressing and it’ll lead to more deckbuilding and that’s best saved for another day. As always, thanks for stopping by and giving it a read. Also in all seriousness, feel free to collaborate with me on any and all idea’s I’ve posted. I hope everyone knows I am approachable, readily reachable online, and I enjoy that sort of collaboration.