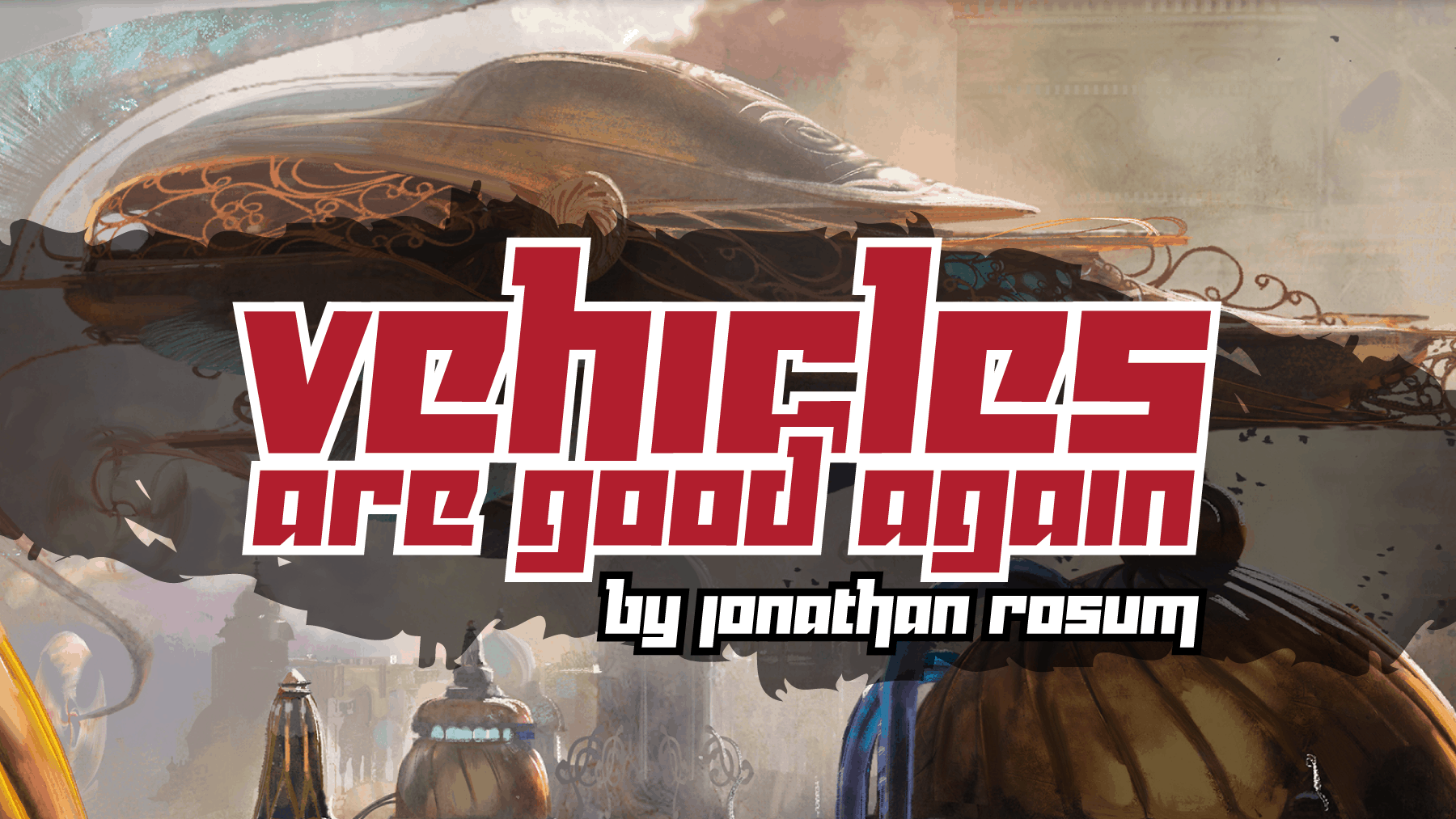 Don’t look now, but Vehicles are good in Standard again.

A couple weekends back I made the Top 8 of the Team Open in Baltimore with W/B Vehicles. I was fortunate enough to do a deck tech with Nick Miller if you want some extra info after you finish reading.

I’ve built a lot of my reputation on the SCG Tour as a Modern player. But I just had to Standard, because of this deck: B/W Vehicles.

Throughout testing that week, Lotus Box team member Zan Syed and friend Julian John were talking about how much they were winning on Magic Online with the deck. I’m pretty sure by Wednesday, Zan had five 5-0s with the deck and a bunch of 4-1s so I had to give the deck a spin. I swapped formats with my teammate for the weekend, Kazu Negri and it was time to play some Standard.

The deck’s main appeal comes from the fact that it is an aggressive deck that attacks the format from a position it wasn’t prepared for. Going into the weekend, we thought that a bunch of teams were going to bring some U/W variant to the Open, followed by a smattering of other creature decks that include: Mono-Red, G/B Constrictor and maybe some of the mirror.

Heart of Kiran and Knight of Malice: Going into the week, it was very apparent that the U/W strategies were very powerful and punishing a slower format. That said, their early-game removal being Seal Away made them lackluster at best trying to answer these awkward-to-deal with-permanents. [Card]Heart of Kiran[/Card] and [Card]Knight of Malice[/Card] both respectfully evade [Card]Seal Away[/Card] and by the time your opponent can answer them — their likely way behind.

History of Benalia: You will be probably hearing this a lot, but this card is absolutely messed up. The card just puts your opponent under an unreal amount of pressure and isn’t particularly easy to answer. It effectively allows you to play both the aggressive game plan and the controlling plan after sideboard and it does everything that you’d want a three-mana card to do.

Karn, Scion of Urza: The biggest winner from Dominaria: [Card]Karn, Scion of Urza[/Card] can and will win you plenty of games by itself. All three of his abilities are very good in this deck. Don’t be afraid to use your Karn to make multiple constructs as they can often become 3/3s and 4/4s and put your opponent under an enormous amount of pressure. Please don’t register any less than four copies of this card when playing W/B Vehicles.

Gideon of the Trials: Gideon was very impressive all week. It’s very good against the bevy of creatures that this format has to offer (other than [Card]Knight of Malice[/Card], which can sometimes be awkward), and isn’t the worst card against U/W Control. It requires them to either answer your cards on your first main phase, or you threaten to deal them a solid chunk turn after turn. I liked having the second copy a lot. Having this multi-faceted threat when you morph into a more controlling deck after-board is important to that plan.

Treasure Map: I would recommend exploring different options when playing this deck in the future. I think that an effect like this is critical in the sideboard plan, but Treasure Map can sometimes be slow and clunky. I tried Arguel’s Blood Fast and it wasn’t much better, but I’m interested to see what comes out of GP Birmingham and how the W/B Vehicles decks sideboard adapts and finds new card advantage options going forward.

Angel of Sanctions: Part of me wishes I played this card in my main deck, it’s honestly unstoppable in a format that is defined by playing to the board like this one is. Angel of Sanctions’ threatening it’s pseudo-flashback makes it hard for the opponent to just flat-out kill it, and Vraska’s Contempt isn’t actively the norm in this format like it used to be. It also has some cute little synergy with [Card]Lyra Dawnbringer[/Card], so don’t forget to play her pre-combat if you want to attack with your Angel of Sanctions!

Let’s talk about how to sideboard with this deck!

This is one of the few match-ups that I feel as though your deck configuration and game-plan doesn’t change after sideboarding. You are the aggressor in this match-up, and it’s very easily to capitalize on U/Ws stumbles in the early game and use your resilient creatures to get aggressive early. This bridges the gap into a turn that you can reliably resolve [Card]History of Benalia[/Card] or  [Card]Karn, Scion of Urza[/Card] and ride it to victory.

This is a match-up where you just want to sideboard into a control deck. You’re just trying to bridge the game into the mid-game where you can either win with [Card]Lyra Dawnbringer[/Card] or [Card]Angel of Sanctions[/Card] their win condition and ride the game home from there. It’s very easily to stabilize the game with cards like [Card]History of Benalia[/Card] so I would recommend keeping hands that either are chock full of Fatal Pushes or just ensuring that you won’t get ran over.

Sideboarding in the mirror often depends on how you feel your opponent is going to board. I generally assume that most opponents are just trying to go over the top of me and I’ve found that the best way of doing that is by cutting all the aggressive creatures.

It is very possible that your opponent will try to be aggressive on the play, so I wouldn’t mind boarding in Golden Demise and not boarding in my Doomfalls if I felt as though my opponent was going to leave if Toolcraft and Scrapheap Scrounger. I was boarding in [Card]Duress[/Card] over [Card]Doomfall[/Card] all weekend, but in retrospect I think I’d swap that. The angels are just the most important creatures in the mirror and you can maneuver the board to snag them with a Doomfall.

Green creature decks are the exact match-ups in which you most want to transition into your control game plan as your Toolcraft + Scrapheap beat down plan is just embarassing against them. Your post-board plan however excels in these kinds of match-ups and can punish un-expecting opponents and allow you to leverage the power of your Vehicles and Planeswalkers with wrath-effects.

I feel as though this deck can be tuned to attack the format in the direction of its choosing.

I would like to explore maindeck copies of Angel of Sanctions as that card comes in so frequently and is very awkward and difficult for most of the decks in the format to beat. I feel as though if Heart of Kiran and Karn, Scion of Urza continue to be dominant cards, then W/B Vehicles is the place to be. I’d recommend keeping the transformational sideboard plan, but I would explore other cards such as Skysoverign, Consul’s Flagship and Liliana Death’s Majesty in the five-drop slot, as both of these cards shine in creature heavy formats.