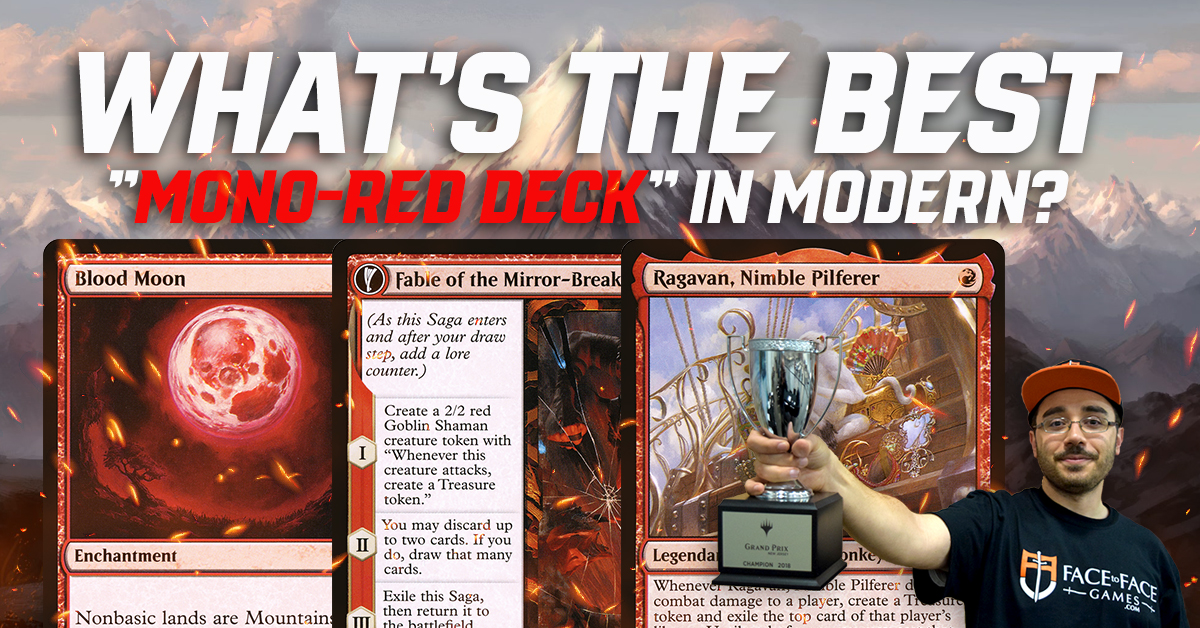 I could start with “over the years” blah blah blah…If you know me I like to cut to the chase. There’s a lot of Mono Red builds in the current Modern format. Let’s go over each one in a little depth. I’ll also be going over a new build that I’ve been brewing myself.

While technically Boros, this is considered the standard for Red decks in the Modern format. Unimaginatively labeled “Burn”, it’s been interesting to me over the years to see a large number of players ignore this deck even when it is at its zenith simply for preference or by underestimating it due to the deck’s supposed simplicity. It’s me, I’m one of those players.

Next up, Mono-Red Prowess:

While Prowess has seen play in multiple instances of the Modern format, it’s popularity has degraded over recent years. These decks can enact their gameplan even faster than Burn assuming they draw the right proportion of lands and spells. This deck and its creature-heavy gameplan matches up somewhat poorly with the current top tier decks in Modern.

Look everyone, we have our Goblin Grenade lovers anonymous meetings on Thursdays. At least I managed to find a list with Ragavan so the deck doesn’t completely cater to being on a budget. These lists are very all-in – what they lose in long game they try to make up for in one-shot kills that are hard to stop. This is probably the worst choice between these first three options or if you are a competitive player. That being said, I still love this deck’s design.

3
Chalice of the Void

Now this is really a mono-brown deck doing its best job to disguise itself as a mono-red deck. Chalice of the Void doubles as easy wins vs Cascade decks. It’s usually pretty difficult for a Mono-Red deck to beat two free 4/4 Rhinos. This deck gambles upon drawing Eldrazi Temples like a champ. While not seeing much play, this deck might actually give a competitive tournament a run for its money. It has the power level and just requires the right draws to really run away with any given event.

Perhaps we should be focusing our attention instead on cards that were printed in the last few sets…:

Now we have my favorite Mono-Red build. A MHayashi special that adds my favorite feature of the game to mono red “card advantage.” This is an old list I’ve uncovered, because I am pretty sure they have even added in Ox of Agonas to add to the beautiful card advantage synergies this deck can produce. The Blood Moon locks and the ability to cycle it when it’s not very good make this an exciting choice in my mind.

Now to unveil my newest creation. It may suck or it may dunk on people. I’m hoping for dunk, but I’ll forewarn you. It’s completely untested:

The Zurgos stick out like a sore thumb right? This deck is trying to capitalize on the explosiveness of Mox Amber. Four copies of Ragavan just wasn’t enough so we had to scrape down low for some fruit that may or may not have been the ripest. It is still a 2/2 for one mana and that used to mean something in competitive constructed formats. Did I mention it has dash??

My second love, after Mox Amber of course, has been Urza’s Saga. If I am going to play a Mono-Red deck and not play Blood Moon in the 75 then you know I have a serious, probably biased, craving for this card. Between making big beat sticks and tutoring up good cards. It also does a good job at filling the Graveyard and making your lands makeup for lack of spells to play in many situations. It can sometimes be a liability against other Blood Moon builds, but the beauty here is we have a million ways to cycle it away too.

I played Izzet Through the Breach for quite awhile and I can tell you I failed to get it where it needed to be. I determined that many of the Red cards were carrying their weight and many of the Blue cards were not. Having a combo in general was costing me against good player’s strategies for stopping combo. So an aggressive build that wins through grinding seemed like the next best evolution of the archetype.

Keep in mind this is mostly theory-crafting, but I plan to test it out thoroughly. Hopefully it bears fruit and I get to bring it to Vegas and score a Beta Draft out of it. Only if Wizards lets me double-queue with Worlds of course.

Anyway, I did my job by putting the idea out there. Hopefully some of you smart mages can help me take this deck to the next level. There’s probably a lot of gas out there to be found and I’m excited to take this for a spin. See you at the tables fellow nerds.