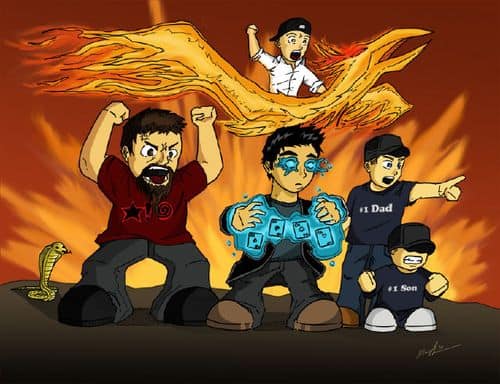 Sound the trumpets and rally the troops, the help of the community is needed to help get one of our own towards his date with destiny! On Friday, 18 March 2011, the very next day after St. Patrick’s Day, one week from today, the TCGPlayer.com 10k will be held in Toronto, Ontario. Two of the members of the critically-acclaimed Magic: the Gathering podcast, the Eh Team, will be in attendance. The odd Canadian out?

After the collapse of the Magic Cruise this year, Jay did the right thing and stood by a promise to his wife to take her on a vacation, but it’s left him fiscally shy of being able to attend. This is an injustice of no small proportion as Jay’s given so much to the Magic community with his writing and podcasting, but fortunately it is one that we all can remedy. Some say that virtue is its own reward. They’re right, of course, but it’s even nicer when there are “extras.” Here’s the deal:

Help us get Jay to Toronto!

For those unfamiliar with Canadian geography, it’s much further than he could walk or take his beloved Calgary Transit (@CalgaryTransit) to:

Help get him there by going to PayPal.com and making a contribution. His email address for PayPal is XcrimsonXeclipseX@hotmail.com

Besides knowing that you’ve done a solid deed for a friend in need, you’ve got two rewards coming your way!

1. Ad space on Jay’s commemorative t-shirt he’ll be wearing for the duration of the event. Got a website you’d like to advertise? Podcast? Just a friendly greeting, message, or Shout-out? Every donation gets space on the shirt, with size and placement up to JayBoosh. While we’d love to get this officially done, the lack of time (plus the fact that 100% of the funds raised in this event will be going to Jay’s travel expenses) mean that he’ll do the best he can with what he’s got. It might just be a black Sharpie on white cotton and an ‘artistic rendering,’ but you will be represented!!

Update: The objective has been reached, but you can still enter the raffle. All excess funds will go to help the current crisis in Japan. Keep it coming!

Here are the available prizes:

– A foil [card]Blightsteel Colossus[/card] from @ErtaisLament
– A [card]Sword of Feast and Famine[/card] from JayBoosh himself, as a thank you
– A 1 hour training session with Jonathan Medina (@mtgmetagame) via Skype about trading. He will help you develop your trading strategy and work on your binder.
– A draft set on MODO and two custom hand-made life counters from Marshall and Ryan of Limited Resources
– 2 foil judge promos: [card]Thawing Glaciers[/card] and [card]Land Tax[/card] for your EDH decks from Charlotte Sable
– A $20 gift certificate for CoolStuffInc from Trick Jarrett
– 2 exclusive alternate art [card]Cancel[/card]s from Dex
– 2 French Renaissance booster packs from Don of Don’s Magic and Sundry
– A foil full art Game Day [card]Black Suns Zenith[/card] from @benc86 on Twitter
– An 8.5″ x 11″ ink drawing or a feature appearance in a future Durdling Around comic from David Lee (@derfington)
– A playset of altered Stinkweed Pimps signed by @metaknightmare
– A foil Japanese [card]Kemba, Kha Regent[/card], 4x foil 10th edition [card]Rampant Growth[/card], 4x M11 Japanese [card]Duress[/card], a foil [card]Explore[/card] and a foil [card]Crystalline Sliver[/card] from @themanascrew
– Special custom life pads from @VRDave of MTGPad.com
– A Yo MTG Taps! t-shirt from Joey Pasco and Big Head Joe
– 4 Chinese foil [card]Mindwrack Liege[/card], a Chinese [card]Braid of Fire[/card] and a [card]Thrun, the last Troll[/card] from @crypplecommand
– The game-worn “jersey” that JayBoosh wears/advertises at the TCG 10k

We know times are tight for everyone right now, but every little bit helps get the Limited Champion of the Casual Flight towards his destiny in Toronto.

Gotta win those cards! $10 in the Boosh’s pocket!

[…] For those so inclined (and those who want a shot at these great prizes), details are here. […]

Sadly I dont have any money to dontae right now as I just took it out of the bank in prep for this weekend myself but I would gladly donate to the cause if you would still like items for the auction. Ship me an email if you still need or would like prizes. ryanbushard@gmail.com thanks. or hit me on twitter @CryppleCommand Hope to see you there Boosh

Also, I was wondering if someone could confirm that I’m entered in. Thanks!

@CGN what name did you send the money as? and what day?

This is a horrible idea

NEWS UPDATE: The objective has been reached, but you can still enter the raffle. All excess funds will go to help the current crisis in Japan. Keep it coming!

Glad to hear you got the funds needed hope to see you there, btw you need to update the raffle prizes mines not up there and I believe someone else I saw on twitter donated and isnt updated either. Just figured id add that. Glad to see the excess funds will be put to good use.

can we buy t shirts when we are there from you guys?

Glad to hear you made it boosh!

sent kyt an updated prize list, please let me know if yours isnt on there, and thanks again ryan

I would NEVER in a million years pay money to help Jay fly for a MTG tournament, but since he has already got there I might contribute to Japan and get free raffle entry.

its ok doug, im sure you wouldnt “win” any of the prizes, just donate it to the red cross
do unto others.

When is the Raffle going to take place?