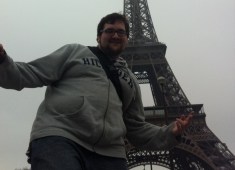 Here is your chance to be part of a documentary about Magic in its most genuine and hilarious form: the road trip weekend.

We follow one of Magic’s most absurd characters, the 25-year-old Dan “Dmac” MacDonald, as he travels from Canada to Providence, Rhode Island to compete in the Grand Prix. While this follows but a few men, in a broader sense, it will be providing a unique glance into the culture of the game.

In an age where the “geek” is a topic of great interest and intrigue, this is a look into a different kind of geek: the competitive Magic player. Half poker pro/half spell-casting wizard. This documentary is meant to entertain the general public, maybe even more than it does the gaming community. It will not teach people how to play. It will not delve into the art nor the fantasy. This is a look at some of the personalities of the game, since, as all of you who have been to tournaments know…you can’t make this stuff up. More importantly, you can’t get it anywhere else.

Documentaries similar to this have been smash hits at film festivals in the past. Star Wars, Trek, Dungeons and Dragons, Donkey Kong etc., have all had their day. Let’s give them a world where the line blurs between nerd and cutthroat business man. Appreciation for the community is great and all, but let’s be honest. People play to win. The filmmaker used to play Magic competitively, but has since retired to go to film school. He still has a total rating comfortably over 2000 though, so he won’t be clueless as to what is happening around him, or to the mindset of the competitive player.

If you are attending GP Providence and are interested in doing an interview, it can certainly be arranged. We are looking for people who have witty, interesting, or experienced insight into the game and its players.

For any inquiries or contributions you may have, please contact either Grayson at:
graysonmoore1@gmail.com

or Dan “Dmac” at:
bigdmac@gmail.com

Thanks in advance for any help or support!