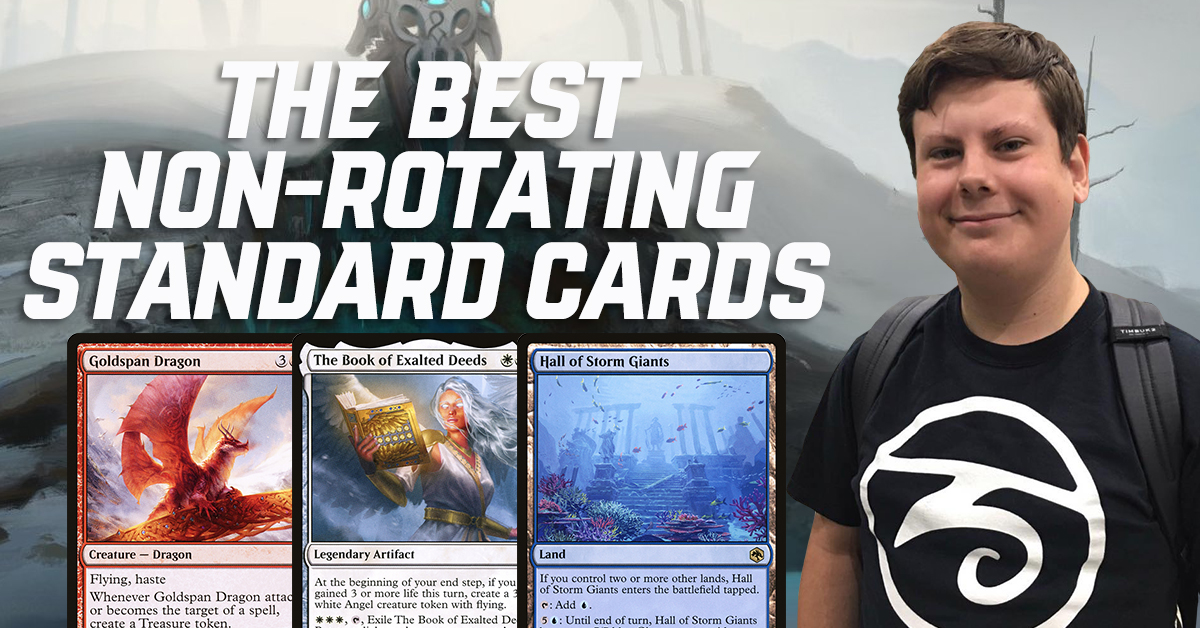 Standard in the world of Innistrad: Midnight Hunt is going to be a breath of fresh air. With a format plagued by bannings (currently eight cards are banned), mostly due to the overpowered set Throne of Eldraine, Standard has been a nightmare to play for many. However, there is light at the end of the tunnel! With the night of the hunt almost upon us, we’ll be getting a brand new Standard format in just a matter of weeks.

With the release of Adventures in the Forgotten Realms, MTG Arena released a “Standard 2022” queue, which allowed players to build Standard decks of only cards that wouldn’t be rotating with the release of Midnight Hunt. I wrote a bit about Standard 2022 about a month ago and what decks I thought were prime contenders in the format. We even experienced a banning in the format with WotC’s decision to remove The Book of Exalted Deeds, since it’s game-winning combo with Faceless Haven was too difficult to interact with.

After playing a lot of Standard 2022, looking at decklists, and re-familiarizing myself with every card that won’t rotate in September, I’ve come up with a compiled list of the best cards staying in Standard with the release of Innistrad: Midnight Hunt. Get your Arena wildcards ready. Let’s dive in, shall we?

Goldspan Dragon is my pick for the best card not rotating with Innistrad’s release. Goldspan has proven itself to be a force to be reckoned with, being able to put on pressure while providing a mana-advantage. It can even protect itself the turn it’s played from a removal spell if you have a Negate or a Saw it Coming chilling in your Foretell zone.

This is the deck Kaldheim Championship winner Arne Huschenbeth used to secure his spot at Worlds in the recent Challenger Gauntlet event. While a significant portion of this deck rotates I want to look at three key cards that don’t: Goldpsan Dragon, Magda, Brazen Outlaw, and Jaspera Sentinel. Jaspera Sentinel into Magda guarantees a turn three Goldspan, putting the pressure on your opponent fast while ramping you into infinity.

Additionally, with the ten Pathway lands staying in Standard, you get access to other colors as a Gruul-based deck. It’s easy to go in different directions with the splash as well, going the Blue route to have access to countermagic or going Black to have access to removal spells and Valki, God of Lies. I’m sure we won’t be seeing the last of Jaspera Sentinel, Magda, and Goldspan Dragon in decks to come. The ability to pump out a Dragon on turn three while being able to splash for a third color with ease is a great way to leave your opponent in the dust.

There is something to be said about Goldspan Dragon in Izzet Dragon builds, with cards like Alrund’s Epiphany, Saw it Coming, and Dragon’s Fire, but ultimately I’m way more interested in looking at Gruul-based builds utilizing the Pathway lands. Speaking of…

The ten Pathway lands are the current best fixing lands going into Midnight Hunt Standard. The only other duals currently in the format are the ten come-into-play-tapped snow lands from Kaldheim, the Snarl cycle from Strixhaven, and the five tapped scry lands from Strixhaven. With the Temple cycle and Triomes leaving in the fall, we’ll only have access to five ‘true’ come into play untapped duals in the Snarl cycle. With the Snarl cycle being conditional, the Pathways are our best bet for untapped mana-fixing.

One great aspect about this cycle, as mentioned above, is the ability to ‘splash’ a third color playing Pathways that have one side of a color you’re already playing. If you’re playing an Izzet Dragons deck with cards that make treasures, such as Goldspan Dragon, Magma Opus, or Prismari Command, you can splash for bombs such as Tibalt, Cosmic Imposter. In Gruul you can sideboard countermagic against midrange/control decks with Blue Pathways. While it’s unknown whether Midnight Hunt will have its own cycle of untapped dual lands, the Pathways will be the premier way to cast more than one color while splashing for a third color with ease in some situations.

With less fixing in the format the more powerful mono-colored decks become. One of the best resources mono-colored aggro decks have access to are man-lands. Man-lands are free extra threats these decks get access to with very little downside. While they sometimes enter the battlefield tapped, man-lands are another way to out-grind your opponents removal or chip in enough damage for lethal, even through a potential board wipe.

Out of these five the most powerful for their activation cost are Lair of the Hydra and Den of the Bugbear. Lair of the Hydra is the “cheapest,” meaning that you can activate it as an additional attacker for only two mana. Den of the Bugbear also leaves behind 1/1 Goblin tokens and has synergy with other Goblins, as it provides 3 power for Pack Tactic trigger cards like Hobgoblin Captain and Battle Cry Goblin.

Cave of the Frost Dragon will definitely see play in various White decks, but reaching six mana is not always an easy feat for aggressive strategies. I’m not sure where Hive of the Eye Tyrant fits in either, but I’m sure it could see play in some of the Black sacrifice decks with Shambling Ghast and Deadly Dispute. Finally, Hall of the Storm Giants is a clear control finisher, but the number of copies you play will depend on how many colors your control deck is. In addition to Hall of the Storm Giants, Crawling Barrens, the sixth man-land in Standard could see play in control strategies, as it benefits from decks with lots of mana at their disposal in the late game. However, I’d only really be comfortable playing Crawling Barrens in a two-colored deck that aims to reach the late game.

One last thing to note about the man lands is the printing of Wrenn and Seven. I talked about Wrenn and Seven in my last article looking at some of the initial Innistrad spoilers and how Wrenn’s +1 ability can find various utility lands. Wrenn and Seven is a very unique Green planeswalker that has a variety of functions. One important aspect about Wrenn that I noted is how it’s -3 ability can make a blocker that checks Goldspan Dragon. If Wrenn ends up being a staple of the format I’d want to construct my deck to maximize its +1 ability, finding the best lands this Standard format can offer. Drawing a basic land is not as impactful as drawing a man-land or scry-land.

Speaking of mono-colored decks, my favorite of the bunch by far is without a doubt Mono Green Aggro. With a deck unreliant on fixing that only plays four lands that only sometimes enter tapped, Mono Green has a strong collection of threats and removal spells that make it a contender for one of the best decks going into Midnight Hunt Standard.

Out of all the Green cards Esika’s Chariot is by far the most powerful, providing four power for four mana, with a backup of a 4/4 vehicle that can both dodge wraths and sorcery-speed removal and provide a snowballing advantage.

In addition to Esika’s Chariot, Ranger Class is another invaluable threat that can run away with the game. A 2/2 for two mana that buffs your attackers and acts as a late-game threat and mana sink is too good of a deal to pass up. Not to mention the synergy Ranger Class’s second level has with cards like Swarm Shambler.

Toski, Bearer of Secrets is a card that hasn’t seen a ton of play in current Standard that I think could see play in the next format. The issue with Toski is that it’s both legendary and contests with Esika’s Chariot in the four-mana slot. I could see 1-2 copies becoming the norm.

Overall, Mono Green has access to a variety of great rares at varying mana costs. With Swarm Shambler and Werewolf Pack Leader and an Inscription of Abundance, you can trigger Werewolf Pack Leader’s Pack Tactics ability on your turn three attack. Old-Growth Troll is another threat that provides insurance in the face of wraths and an early Kazandu Mammoth is a prime attacker with multiple landfall triggers. With removal spells like Blizzard Brawl and a man-land to boot, Mono Green seems like a contender for one of Midnight Hunt’s best decks, but we’ll have to wait until release to see about that.

#5 The Book of Exalted Deeds

With the combo of Book of Exalted Deeds and Faceless Haven getting banned within a week or so of it being legal in Standard 2022, I’m sure we’ll see mono white snow combo see a return. The two cards in conjunction provide a game-ending combo, unless your opponent has instant-speed removal the turn you activate or one of the few ways to remove lands, such as Cleansing Wildfire or Waking the Trolls.

The deck relies on support cards that help draw cards and gain life for your Book, such as Revitalize, Search for Glory, and Potion of Healing. You can also slow down your opponent with cards like Doomskar and Skyclave Apparition. While the deck has a pretty hard to interact with win condition, it can still lose to decks with heavy removal and counterspells. As long as your opponent respects the combo you can find yourself without a window to combo off. I do think this combo will restrict the format if there aren’t many ways to interact with it. We could easily see another ban shortly into the format if Innistrad: Midnight Hunt doesn’t bring any land destruction cards to the table.

While Throne of Eldraine and friends may be leaving the format in September, Standard still has a variety of powerful cards left. I’m looking forward to what Innistrad: Midnight Hunt brings to the format. Looking at spoilers so far there are some interesting non-aggressive cards that could prompt the return of classic midrange and control decks to the format. I’m wary of Goldspan Dragon and Mono Green decks wreaking havoc on the format, especially the Jaspera Sentinel/Magda builds. But with proper interaction we could see a very balanced Standard format.